Can we please keep our children away from the narrative which says 'we are different but together'?

Yes, the detergent advertisement which has been in the eye of a storm sweeping across social media is very problematic. No, not for the 'Hindu-Muslim' controversy that has erupted around it. But also, precisely for that.

As of now, we're hearing complaints about the ad like: 'Can a Muslim kid not save himself from/actually enjoy the colour balloons thrown at him?' 'Why not show Muslim festivities?' and 'How about showing a Hindu navigate a Muslim locality for a change, eh?'

I am not talking about any of these questions — they're largely for those graduating around us courtesy University of WhatsApp.

My simple question is — can we please keep our children away from this deeply divisive discussion?

The ad has simple and complicated fall-outs.

For example, kids watching the advertisment on television will become aware that Holi is apparently 'not a festival for Muslims', and a mosque is not a place of worship for Hindus. But we are meant to be happy — somehow — together because that’s apparently 'our culture'.

Is it necessary to expose kids to this miasma of cliches and contradictions right now? Truly?

There are other problems with the ad as well.

Is there any reason why a little boy, not much older than a toddler in fact, is not accompanied by anyone at all to go pray at a mosque? Also, given a chance, a cough drop brand may easily pick up from here to treat the little girl because she might just get a fever after being hit with so many water balloons!

This is how the advertisement works. In a bizarre, no-reason-no-logic kind of way. In a way that tries to push your emotional buttons, but does so by first pulling out the worst stereotypes — and strapping kids into them. 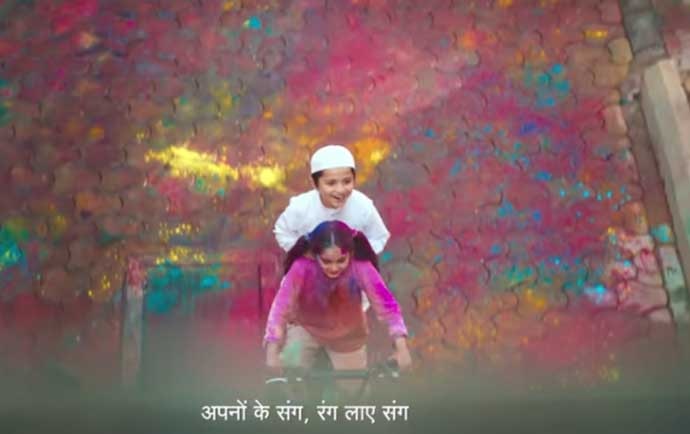 Let's not wheel our children into our religious identities — and our bitter divides. (Photo: Screenshot)

Interestingly, like with many banal ads around, there was no instant reaction against the commercial. Protests got louder as some days passed — often on the crutches of fake images floating around on social media. This perhaps shows the 'outrage' was a concerted effort. But as often happens with outrage, it was thoroughly misplaced.

What people should be offended by here is not the display of Hindus and Muslims and religious festivals as per. They should be upset by the use of children, in stereotypes, in close-set identities, in conflicts and in arguments that ideally, children should be kept far away from.

What is the need to even show a small kid rolling up his shalwar, about to toddle off to pray at a mosque, behaving like a middle-aged man?

Can we for once instead show parents just leaving their kids alone?

They can learn about religion in their own good time. They can decide about it themselves when they feel like it. They can choose their own religion. Or choose not to be religious at all, if they like.

Why should we celebrate an ad that instead shows small kids strait-jacketed into religion, and all its wonderful divides, before they can even spell 'lack of choice'?

Also Read: Why we need to rewrite our wedding vows