The evolution of Goddess Durga and Durga Puja

The nation is in a festive mood. One can easily witness Durga Puja being celebrated with full fervour across the country. But do you know how this festival has evolved since medieval times?

Why does this difference exist?

Goddess Durga is worshipped in Bengal and Odisha along with her sons Ganesh and Kartik, and daughters Lakshmi and Saraswati. Have you ever noticed how the sons and daughters are always depicted as calm and poised while the mother is depicted as a warrior? In many Hindu scriptures, Saraswati is the wife of Brahma, and Lakshmi is wife of Vishnu — so why are they depicted as daughters of Durga? Do you know how this festival has evolved from medieval times? (Photo: Reuters)

What scripture does one then ascribe to — the Matsya Puran, the Shiva Puran or Markandeya Puran? These questions may not have satisfactory answers as Hinduism treats these connotations as sin. But history may reveal something logical. Let's go back to the historical evidences stored in different museums across the globe.

The Goddess who rode the lion was well-known in the Middle East and the Mediterranean region for a millennia, as Ishtar in Mesopotamia, Astarte in Greece and Cybele in Troy. Cybele was, in fact, so powerful that she was taken away to Rome in 204 BC from Turkey's Anatolia, and Roman emperors worshipped her as the "great mother of the gods"- Magna Mater Dei. Till the 4th century, her temple was located where Vatican stands now. It is quite interesting to note that her worship was known as “baptism in the blood of the sacred bull" — it sounds similar to Indian belief of Durga spilling the blood of the buffalo.

In ancient India as well, Durga used to be depicted differently. The oldest statue of Goddess Durga in India belongs to the 1st or 2nd century AD and currently resides in the museum of Mathura. The sculpture depicts Goddess Durga with four hands, killing a buffalo.

The Devi Mahatmya of Markandeya Purana, a very famous Hindu scripture, narrates that the form of Goddess Durga, a woman warrior riding a lion or tiger, with weapons in hand, represents energy, i.e. "Shakti". The scripture also narrates that this form of Goddess Durga was created to fight a demon called "Mahishasura". From the scripture it is understood that Mahishasura was a demon with human body and buffalo head.

But how is that possible? The scripture clarifies that once the king of demons, Rambha, fell in love with a water buffalo and out of this union, Mahishasura was born. One thing is very clear from the mythology that there was a "water buffalo" and the buffalo was killed for sure.

While, in Eastern India, Mahishasura is a villain character — a demon destroyed by goddess Durga; whereas Mahishasura is worshipped in South Indian states. Mysore, in Karnataka, is named after him. Hence, Mahishasura statues in the south are not depicted as a demon with human body and buffalo’s head.

Some historians and experts provide some explanation for this. Authors Rachel Fell McDermott of Barnard College and Michael Witzel of Harvard University say that to save the crops, water buffaloes were killed; gradually the menace of water buffaloes was completely eradicated. Normally, cultivation takes place from July to September. Between September and October, the crops are harvested. This is when we celebrate the Durga Puja. Is there any relation between the water buffalo, agriculture and Durga Puja?

Logically it could be correlated. 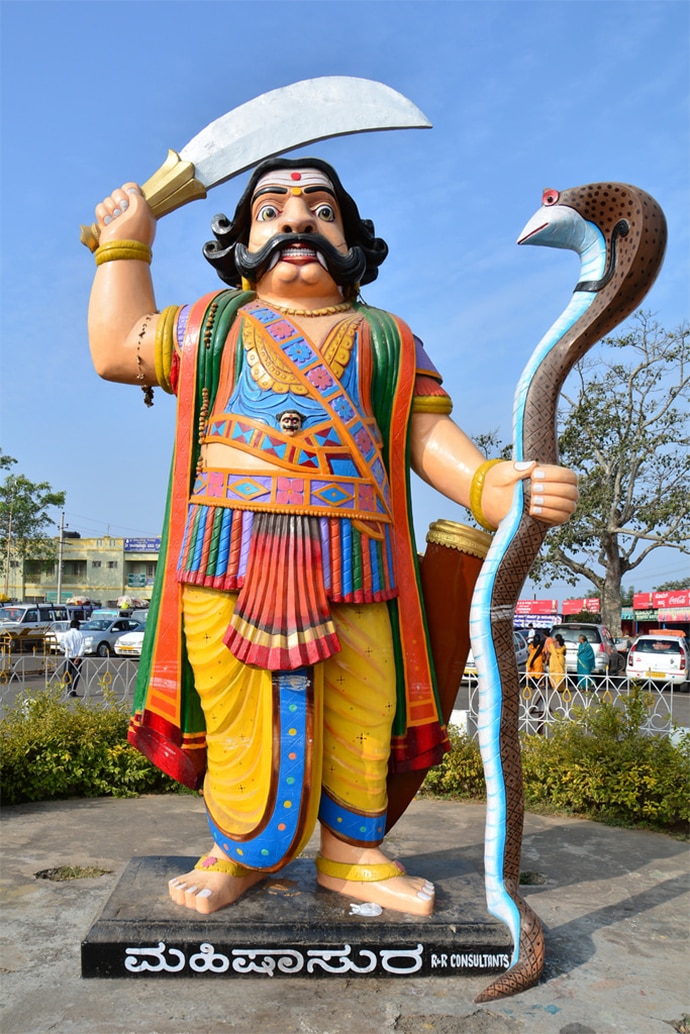 Mysore, in Karnataka, is named after Mahishasura. (Photo: Wikimedia Commons)

Dravidians do not celebrate Durga Puja as victory of goddess Durga over the buffalo demon, Mahishasura. It seems only Aryans have depicted such demonic image of Mahishasura.

Durga Puja in Kolkata began around 1790. It was notified in the Kolkata Gazette some time towards 1801. Initially it was limited to celebrations only by the zamindars (land owners). It took decades to bring it to a community level and among the masses. Towards later part of 19th century, Durga Puja in Bengal became popular and now it is celebrated with all kinds of extravaganza.

Interestingly, Bengal did not have a Durga temple till the 17th century. And Durga's depiction was completely different back then. Whether we collect the sculptures available in different museums of India, or the depiction available in Ellora caves, Ajanta caves or Mahaballipuram, the characterisation of goddess Durga has always been unique. In some images, we find Durga standing over a buffalo only, in some we find Durga riding a lion and killing a buffalo, in some cases we find Durga chasing a buffalo demon with human body. Those pictures also show Goddess Durga with four to 16 hands. Is it just an imagination?

Kolkata Zoo was established towards early 1800. Till then, the people of Kolkata and the artists had possibly never seen a lion. Hence, before then, statues of Goddess Durga were built with myriad imaginations of lions. In certain old statues, one can find Durga riding an animal that looks like a horse or a donkey. Some historians, including the culture expert Jawahar Sircar, however, stress on the depiction of iguanas, commonly called as “godhi saap” in Bengal and Odisha. In Chandi Mangalkavya, there is a mention of “godhi saap”, which became Suvarna Godhika and later took the “Chandi” form.

Jawahar Sircar mentions that there is an exception in Bangladesh. In Dakshin Muhammadpur of Bangladesh, Ganesh and Kartik were discovered in some ancient sculptures.

Another theory is that to make Durga Puja more acceptable among masses in the 1900s in Bengal, Durga’s statues were made more socially acceptable — domesticated with her children. Thus Durga's depiction took the form of mother instead of just a warrior goddess.

People in Assam, Tripura, West Bengal, and Odisha believe that the “darling daughter” Durga comes home to her father's place in this season and hence the celebration takes place in grand manner for five days.

Durga Puja and faith might have been transformed, but the contradictions still exist.