With her Muslim vote bank intact, Mamata is focused on not losing out on the goodwill of her Hindu voters.

An amount of Rs 10,000 for every Durga puja organiser in the state. That's what the West Bengal government plans to give to 28,000 puja committees after chief minister Mamata Banerjee announced a whopping Rs 28 crore bonanza for the purpose.

It may sound unprecedented, especially for a state claiming to be caught in a debt trap, but not really. The same government had announced a policy to dole out monthly stipends to imams and muezzins across Bengal. 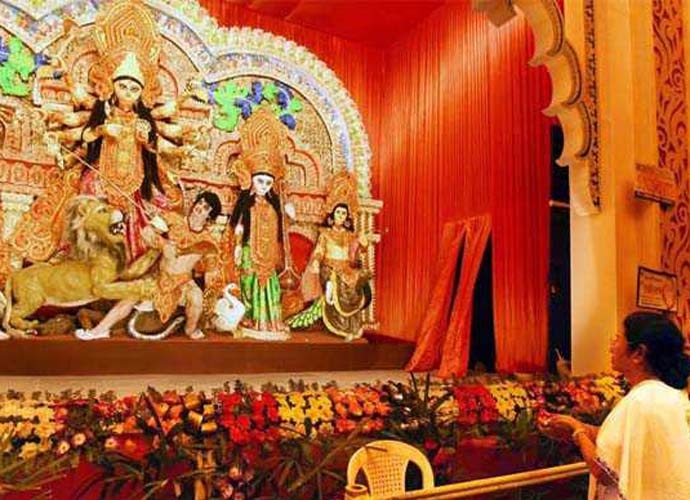 Mamata Banerjee understands she cannot let the BJP take away the Hindu votes from her. (Source: India Today)

But Didi's latest decision is significant, at least the timing of it. Coming as it is, in an election year with Hindutva as a political ideology making its grand entry into the state where BJP has emerged as a force to reckon with.

So is this an attempt at image makeover for Banerjee?

By opposing the saffron dispensation led by Modi, Banerjee has carefully crafted an image of herself as a messiah of the Muslim community.

From opposing the Centre over sending back Muslim Rohingya refugees to inviting Pakistani singer Ghulam Ali to hold a concert in Kolkata after his event got cancelled in Mumbai, her silence on triple talaq issue and vehement opposition to the National Register of Citizens — a series of calculated steps have bolstered her credentials as a pro-Muslim leader.

And the 2016 election results have shown that Muslims in Bengal — a decisive 27 per cent of the electorate, are firmly with the TMC.

The more the BJP pushes its Hindu persecution narrative in Bengal, the easier it becomes for Banerjee to brand the party as an anti-Muslim force. The accusation that she is out to appease Muslims has only helped her cause. Polarisation has given her rich political dividends. The Trinamool Congress is being increasingly seen as a pro-Muslim party in West Bengal. (Source: India Today)

But the recent panchayat polls have thrown up a new trend. The saffron party with the active support of the Rashtriya Swayamsevak Sangh (RSS) and the VHP has started digging into TMC's rural vote bank. The BJP took the second spot after TMC in the overall panchayat results. Given how violent the turf war to control Bengal's rural bodies is, this surely was an unthinkable feat just a few years back.

A significant chunk of the state consists of poor tribals and adivasis, especially in parts of central Bengal, the erstwhile Maoist affected zone of Jangalmahal and some areas in North Bengal.

In south Bengal, the party is actively wooing the influential Matua community comprising lower caste Hindu refugees who have migrated from Bangladesh in the face of persecution.

In border districts such as North 24 Parganas, where the community has a major clout, the BJP has been stoking fears of a demographic shift accusing Banerjee of abetting illegal Muslim infiltration. It even went on to win the Basirhat Assembly seat.

RSS affiliates and right wing NGOs are doing the groundwork for the BJP to capitalise on during the elections. Organisations like the RSS-backed Vanbandhu Parishad run 3,543 Ekal Vidyalaya's in tribal areas, the Akhil Bharatiya Shiksha Sansthan has more than 300 Vidya Bharati schools. RSS' health wing, Arogya Bharati, organisess hundreds of free medical camps in tribal regions.

Given the caste demography of Bengal, BJP's outreach among tribals and adivasis is significant. As per the 2011 census, Scheduled Castes (SCs) constitute 23 per cent of the state's total population of 8 crore. Of this, the Rajbongshi (adivasi) in north Bengal with 18.4 percent and Namasudra (lower caste Hindus like the Matua) in south Bengal with 17.4 per cent make up a major chunk of the total Schedule Caste population.

Against this backdrop, her overt pandering of Mullahs has only alienated the middle-class.

The BJP IT cell's constant social media blitzkrieg, often referring to her as Mumtaz Begum, accusing her of links with jehadi elements has literally forced the TMC to begin organising its own IT cell to fight the perception battle in the virtual world ahead of 2019 polls.

All this comes to prove that if there is anyone in Bengal who has taken the possibility of BJP being a potent political force seriously, it is the TMC supremo herself.

With Bengali Hindu dominated Tripura gone, her fears are now real. She knows the saffron brigade has the money as well as the wherewithal. In such a situation, as an astute politician Banerjee can no longer take her rural vote bank for granted, while repeatedly antagonising the majority Hindus in the state.

Polarisation may have initially provided her dividends; in the long run it is sure to cost her dearly.

Possibly that explains her sudden balancing act of doling out crores for Durga Puja or instructing TMC leaders to actively take part in Ram Navami processions. No wonder, TMC leaders are pleading with Muslim clerics ahead of Muharram this month so that the community resists from taking out armed processions on the occasion - conscious not to give more ammunition to the BJP!

With her Muslim vote bank intact, Didi is also focused on not losing out on the goodwill of her Hindu voters.

Post your comment
#Bjp it cell, #West Bengal, #Durga Puja, #Mamata Banerjee
The views and opinions expressed in this article are those of the authors and do not necessarily reflect the official policy or position of DailyO.in or the India Today Group. The writers are solely responsible for any claims arising out of the contents of this article.