Eid al-Adha is also known as the 'salty Eid' and is dominated by meat-based dishes. What better dish than mutton biryani to enjoy the spirit of the festival?

Today is Eid al-Adha — the Eid of sacrifice. This Eid is celebrated to commemorate the sacrifice of Prophet Ibrahim, who willingly agreed to kill his son at the behest of God.

Known as the ‘salty Eid’ this festival is known for the mutton dishes that dominate the feast. As tradition goes, the festival involves sacrificing an animal and sharing the meat with family, friends and poor people. The goal is to ensure every person gets to eat meat and thereby promoting a message of kindness and equality.

From Gosht Khichda, Kaleji ka saalan to Bhuni Raan, the day is all about meat. However, the highlight of the day is mutton biryani. This dish requires you to prepare the rice, the crispy garnish, and marinate and cook the mutton separately. And then layer each of them to cook it in 'dum' style. For the festival today, consider making this biryani that is worthy of a celebration and will leave your loved ones asking for more. 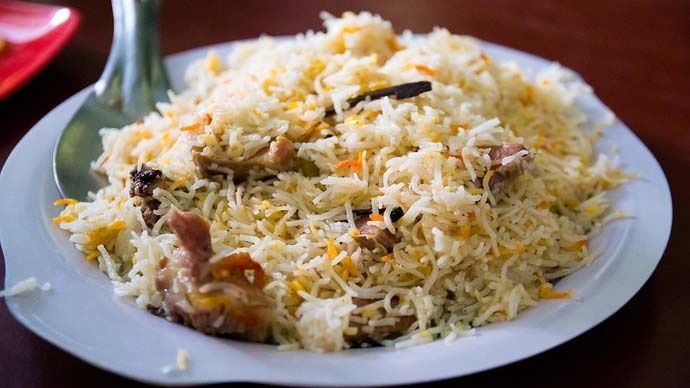 For preparing the rice:

Half a kilogram (two cups) of basmati rice, blanched

A teaspoon of fennel

For marinating the mutton:

A tablespoon of garam masala

A tablespoon of garlic paste

A tablespoon of ginger paste

A teaspoon of coriander powder

A teaspoon of cumin powder

A tablespoon of red chilli powder

A teaspoon of salt

A teaspoon of saffron strands, crushed to a powder

A quarter cup of warm milk

A quarter cup of coriander leaves and stems, finely chopped Remove from the pan and drain the excess oil on a paper-towel-lined plate.

To cook the mutton, first heat three tablespoons of ghee in a thick-bottomed pan. Add the remaining sliced onions and green chillies. Keep stirring continuously till the onions are light golden brown.

Add the ginger paste and the garlic paste. Mix well. Once the raw smell goes away, add the marinated mutton and cook on high heat for seven to eight minutes.

Add the coriander powder, cumin powder and red chilli powder. Mix thoroughly and stir in three cups of water. Bring it to a boil and then reduce the heat. Cover it and cook until mutton is almost done.

Now add the tomatoes, garam masala powder, a dash of fresh coriander leaves and salt. Cook for 15 minutes more on medium heat, stirring occasionally. By this time the ghee would have separated from the spices, and the meat would not have any watery gravy.

Tie the whole spices — cardamom, cinnamon, cloves, javitri, jaiphal, black peppercorn, shahi jeera, and star anise — in a small square of muslin cloth and make a potli of it.

In a pan, boil 750 ml of water. Once it is boiling, add the rice, bay leaf, salt and spice potli. Cover and cook until the rice is al dente. Drain and set aside. Remove the potli.

Next, prepare the saffron milk. In a small bowl, stir together the saffron powder (saffron strands crushed with a pestle) and the milk. Dissolve it, cover and wait for 20 minutes. Add rose water and kewra essence to this. Mix well, cover and set it aside.

To layer the biryani, heat two tablespoons of ghee in a large heavy bottom pan with a tight-fitting lid. Coat the base and the sides of the pan well with ghee.

Add a thin layer of basmati rice in a heavy-bottomed pot. Add a layer of sauce, and a few slices of the lemon. Cover with the remaining rice. Sprinkle cold water on the top and drizzle the saffron milk over it.

Now add a layer of rice. Then add the cooked meat pieces, sprinkle saffron water, add fried onion slices and ghee. Repeat until you have three or four layers and the top layer is rice.

Garnish with the mint leaves, coriander leaves, a smattering of fried onion, a few slit green chillies and juice of half a lemon.

Put on the lid and seal the pan with flour dough. Keep the flame at the lowest and cook the biryani for 40 minutes.

Ensure that your pan is heavy-bottomed or the rice will burn. If you don’t have a heavy-bottomed pan, place a flat tawa on the stove and put the pan on top of that.

After 40 minutes, turn the heat off and let the biryani sit for another 10 minutes.

Once the rice is cooked, mix with a light hand using a wide-rimmed spatula. Take care to not break the delicate rice grains.

Garnish the biryani with more crispy onions, coriander and mint.

Serve it hot with raita and salad.

Also Read | Of love and sacrifice: The story of Eid al-adha