Cold-blooded encounters: How snakes are more sensible than humans

Every farmer has a snake anecdote. Of one such landowner here are a few true stories with a thoughtful hiss in the tail.

Snakes and farmers are a life-long relationship; sometimes outliving our spouses. Like all sensible creatures, even the deadliest snakes kill only to eat and their interest in humans is at best limited to the rat population we breed on the grain we produce. It is the rats and frogs they consume and it is their shelters they snatch for the winter. Just watch your step in the day and stomp your feet at night, humans, and you’ll be fine. Serpents are silent, but peace is what they seek.

My encounters with snakes have been strange and too many. On two occasions they have actually fallen on my head, though dead. Once when I was lifting the enormous shutter of the tractors’ shed and a snake eyeing a bird’s nest got caught in the rolling steel. And the second time when an eagle decided on dropping a two-foot beauty from two hundred feet on my crew-cut. The miraculous bit was that I was walking fast and it still hit the target. Imagine my shock. My encounters with snakes have been strange and too many. (Representative photo: Reuters)

Live serpents, on the other hand, come with all sorts of emotions besides fear and awe. I don’t exactly know what it is about their slimy slithery bodies that force us to gape. It was sweltering mid-June and I sat on the tractor under a Jamun tree sucking a langra mango. The birds created a ruckus as if it was their papa’s farm and not mine. I looked up annoyed, and my breathing stopped. Twelve inches above me sat an unending Naja naja flicking its tongue and regarding me with interest. It was like a tense scene in an old western, any sudden move and you get killed. Had it opened its hood, I would have died anyway. The broad scales across its belly told me how lethal the bite was. We just stared hypnotised. A bearded Mowgli and a lazy Kaa. I could see the women, smeared in mud, returning from the paddy field for lunch and I did not want to become a joke forever. So gently I started the engine, shifted to first and rolled out inch by inch scanning the underbelly of the reptile. I had nightmares for days. 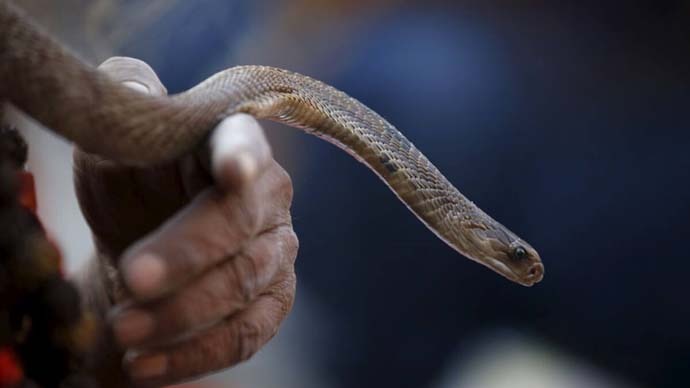 It is the poverty of something that turns us into ‘inhumans’. I couldn’t get myself to say ‘snakes’. (Representative photo: Reuters)

Then there was this playful black cobra, all six feet of it. I had a habit of sleeping for twenty minutes after lunch. And then, still drowsy, I would shout to the workers to return to the field, and followed a little later. The first time it happened I thought it was a dream, a streak of ebony lightning two inches from my foot. But then it became a habit. The cobra would wait for me to come down the dirt-road and race across my path. This game went on for weeks until I mentioned this weird behaviour to the men. They knew that cartoon very well, they laughed. The next afternoon the snake did not appear, and the next. What could have happened, I wondered aloud. And very casually they told me they had killed it because they were certain someday, I would step on it and that would be the end. I found my lonely friend’s body drying out on the karonda hedge covered in millions of ants. Even when we grow up, somebody is always deciding for us who we must play with.

The other incident, or rather accident, happened in October 1990. Autumn is that time of the year when reptiles seek shelter in preparation for winter. The rains are long gone and all rat-holes welcome tenants. Nanu was the man in charge of the buffaloes. He had no family, no strength because of his age and no desire for company. Alone, he would tend to the bovines from fodder to grooming to milking to everything three full-grown animals and two tottering calves needed. That evening I found him sitting by a pile of chopped sorghum, holding his head in anger and disbelief. I asked what happened.

This is his story. He went to the field and cut the fodder, almost six feet high. He laid it in bundles of 50 kilos tied together firmly. Then, because he was too old and weak, he lay down beside a bundle, as was his technique, and pulled it on to his back. After that, he rose, joint-by-joint till he was standing bent forward with the load. His trudge to the chopping machine was a good hundred metres. He deposited four such bundles of fresh green sorghum, about two quintals in all, and chopped it by turning the handle of the machine for two hours. It was only then that he discovered he had chopped a venomous snake with the fodder. How in hell?

The snake had sneaked into one of the bundles, which he carried on his back, thrust into the machine with his hands and chopped into two-inch bits that lay bleeding in his four hours of labour. Nanu wasn’t even thinking of the snake, he was angry because the fodder would be thrown away and he had to do this exercise all over again. Anyway, he went to his hut, had his opium-infused bowl of water and went back to work. I could blame his dulled sensitivity to poppy, but I know the culprit is always poverty. It is the poverty of something that turns us into ‘inhumans’. I couldn’t get myself to say ‘snakes’.

Also Read | The bird and the believers: How the curse of the owl fell upon me

#Agriculture, #Snakes, #Man-animal conflict, #Farming
The views and opinions expressed in this article are those of the authors and do not necessarily reflect the official policy or position of DailyO.in or the India Today Group. The writers are solely responsible for any claims arising out of the contents of this article.