The bird and the believers: How the curse of the owl fell upon me

An account of what it is to be a lover of wildlife, so close yet so far from nature.

If you’ve ever seen a ten-acre plot of peas, you can’t forget what peace it brings to the eyes. All you are cooled by is a beautiful green, mottled by white flakes of flowers. Exactly thirty-five days after sowing, the first buds appear and in two weeks the entire field is covered in this snow of petals. It is in December on a sun-drenched afternoon that I half-read half-dozed behind a line of workers squatting like hens as they went about weeding out Chenopodium and Phyllaris, the two prime enemies of winter crops.

I heard a yell and raised my head out of the novel I forget the name of. Some of the workers had stood up and stared afar shielding their eyes from the sun. A volley of shouts rose from the neighbouring farm. Twenty-five hand-shovels came to a standstill.

I sent out two of my trusty and over-zealous ambassadors to ascertain what the matter was. The rest sat on their haunches devising theories of their own. The most plausible theory being that another young couple had been found disgracing their families amongst the sugarcane that was now six feet high and thick. Such stories, though common on farms, spice up life for a week at least. When crops are growing you have little to do but chatter, you know.

The emissaries did not return empty-handed. Between them, they held the largest, most beautiful and definitely the rarest owl I’d ever seen. A wing-span of three feet. Feathers whiter than pea-petals. And talons and beak so deliciously viciously yellow, yet harmless in the glare of the eye in the sky. The bird gazed with its big fat pupils like a child of four. 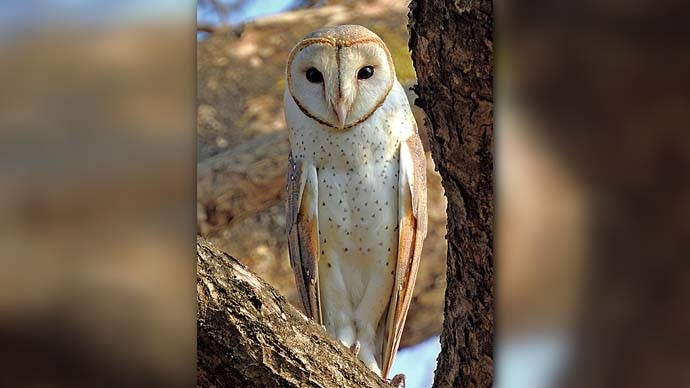 The owl drives away bad luck so they had shared bits of the bird. (Representative photo: Shantanu Kuveskar/ Wikimedia Commons)

Six men came panting and stopped short of the boundary. They said the owl was found on their farm and belonged to them. My soldiers told them to get lost because finders were keepers. We won, they left. A roar of happiness rose in our ranks. We crowded around for a closer look. Indeed, it was the most stunning creature, almost two feet tall.

Feeling more responsible than those illiterate buffoons, I went about expounding on the rarity of the bird and how it was the most precious friend a farmer could have. The group nodded, saying that’s why it was considered most auspicious too. The Goddess of Wealth used it as her private plane. Exactly, I ordered, now let it go. And came away.

Early next morning I went about their quarters, as usual, waking up the laggards and telling the others what was important for the day. Who irrigates the wheat, who goes to town for urea, who gets the pump fixed and the likes. It’s then that I suddenly went silent.

Hanging from the thatch of a hut was a claw. I looked around and they ducked behind doors. My eyes scanned the other homes and saw all I needed to see. As I walked off, Billa, the driver-manager tried explaining.

The owl drives away bad luck so they had shared bits of the bird. Someone took the claw because he wanted a son. Someone took the wings because his daughter wasn’t getting married. The beak wards off infertility. The head cures diseases of the lung. The gizzard is good for the heart. The heart brings wealth. The guts are for those with white spots on the skin. The flesh boiled and dried and hung under the bed takes care of alcoholics. And if girls wore owl feathers in their hair, periods were less painful.

I fell sick that night. The curse of the owl fell upon me. I hadn’t done enough.

Also Read: Why farming is a cruel business

#Farming, #Owl, #Wildlife, #Poaching
The views and opinions expressed in this article are those of the authors and do not necessarily reflect the official policy or position of DailyO.in or the India Today Group. The writers are solely responsible for any claims arising out of the contents of this article.