Cauliflower calling out to all the health freaks

The humble cauliflower has more health benefits than you think! And it is unbeatably versatile to pair up with any other vegetable, dal or even as a low-cal substitute for rice!

There is something commonplace about cauliflower.

It’s not taken too seriously, either by chefs or by nutrition experts. You don’t see odes written about it anywhere, unlike say broccoli. Both of the flowery veggies, by the way, belong to the same cruciferous family of vegetables (cauliflower, cabbage, garden cress, bok choy, broccoli, Brussels sprouts). Maybe because it’s humble, inexpensive, easily accessible (you don’t have to go hunt for it in high-end grocery shops), and has been cooked in our homes forever.

Mothers and grandmas sure knew they were on to something when they made sure they stocked on it and cooked it by rotation a couple (in some households maybe even more than that) of times a week at least. My mom felt it paired well with every dal, and is a perfect addition to the menu — whenever you need to add another veggie to the table, just in case we had an unexpected addition on the dinner table.

When a vegetable is so giving and dependable — like the cauliflower, it needs to be talked about, even if it does not ask for it and have serious backers (or marketing budgets). The comfort food of the soul: The ubiquitous plate of aaloo gobhi. (Photo: Wikimedia Commons)

After all, it helps to know that the ubiquitous turmeric and cumin spiced aloo gobhi that you have been eating from childhood did you some a lot of good. And if you aren’t eating it enough any longer, even then a reminder will be good.

For starters, this is an extremely low-calorie vegetable that drives a bundle of fibre too. 1 cup about 120 grams gives you just 25 calories and a whopping 3 grams of fibre. The fibre it delivers is important for digestive health, and being low calorie and low carb, it works as a low-calorie substitute for many high-calorie foods, such as rice and flour. In fact, cauliflower rice is a fairly recent discovery that has a lot of dieters and socially Keto dieters frothing with happiness. Cauliflower can replace grains and legumes in many recipes, which is a great way to eat more veggies or follow a low-carb diet. 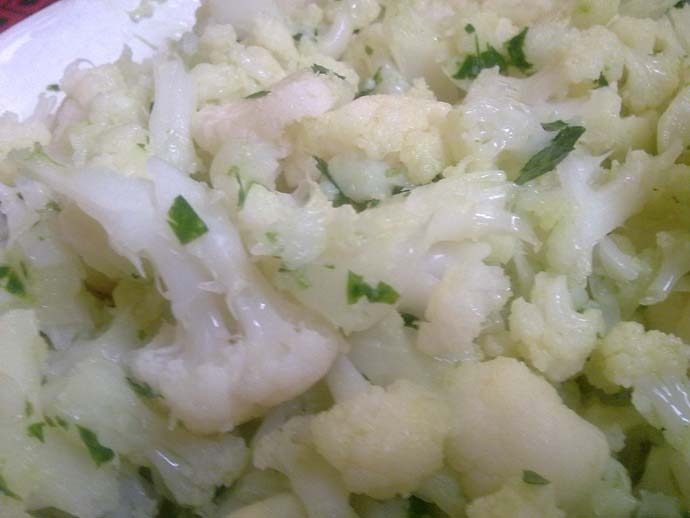 It is an excellent source of vitamins (C, K, B), and minerals (potassium, manganese, magnesium, phosphorus), containing some of almost every vitamin and mineral that you need.

Like other cruciferous vegetables, cauliflower is particularly high in glucosinolates and isothiocyanates — two groups of antioxidants that help slow the growth of cancer cells. These are especially protective against colon, lung, breast and prostate cancer. It is also rich in an antioxidant called sulforaphane that has the potential to stop cancer growth by destroying cells that are already damaged. It also helps keep the BP down and the arteries healthy — both major factors in preventing heart disease. Plus the Vitamin C in it also works as an antioxidant and anti-inflammatory agent and helps reduce the risk of heart disease and cancer.

Cauliflower also has the ability to bind together with bile acids and help regulate blood cholesterol levels.

It also is one of the rare food sources of choline which is important for brain development and the production of neurotransmitters needed for a healthy nervous system. Choline also helps prevent cholesterol from accumulating in the liver and cut the risk of liver and heart disease and dementia and Alzheimer’s.

Getting a little experimental in the kitchen always helps. Be it with ingredients, seasonings, or even just the way we cut the veggies. It helps keep boredom away, opens up our palate to different tastes, flavours, and may actually add some more health to the fare that we eat. 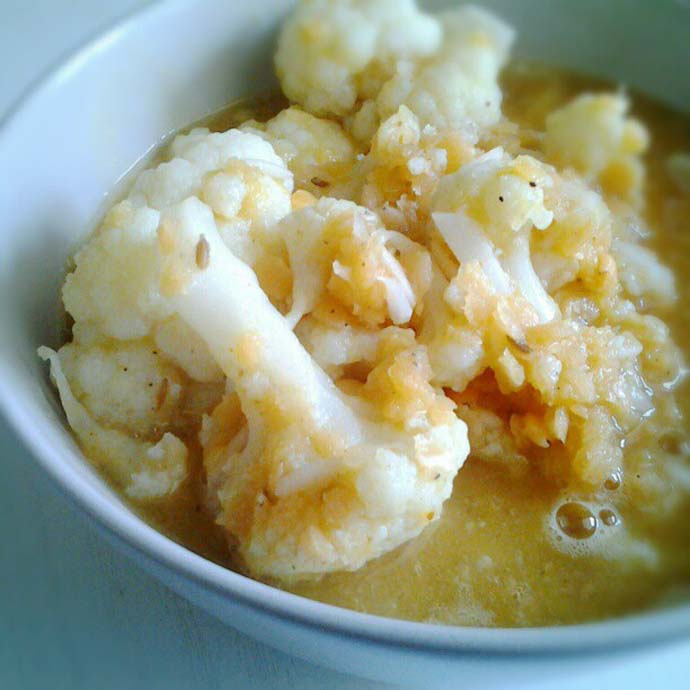 Versatile cauliflower can be paired with any vegetable, lentil or dish. (Photo: Wikimedia)

Especially so, in the case of cauliflower as it is unfortunately considered as boring by many.

Sautéing is the best way to cook the cauliflower to retain most of the benefits as boiling and steaming might lead to a loss of some nutrients. But the best part is that while cooking might lead to loss of some water-soluble nutrients it also improves the bioavailability of other nutrients. For example, there is increased bioavailability of the carotenoids lutein and zeaxanthin (great for our eye health) following the cooking of cauliflower.

Have it as cauliflower rice, soups, pizza base, hummus or mash.

To make the versatile mash, separate the cauliflower into florets and discard the core. Steam the cauliflower till tender, add a little milk, butter, sour cream, salt and pepper to taste, and mash with a masher until it looks like mashed potatoes. It’s lovely as a side with eggs — you won’t miss the toast after this. Ever.

Post your comment
#Low carbs, #Nutrition, #Fibre, #Vitamin c
The views and opinions expressed in this article are those of the authors and do not necessarily reflect the official policy or position of DailyO.in or the India Today Group. The writers are solely responsible for any claims arising out of the contents of this article.