Dressing up your male bias: My open letter to Sabyasachi Mukherjee for the sake of all women

Designer uses Miss Havisham, Charles Dickens' 'Great Expectations' character, to say women who are overdressed and 'caked with makeup' are 'wounded' and 'bleeding inside'. That's bosh.

Who am I, for God's sake, that I should be kind!

Despite your 'unconditional apology', a temporary one, I quote the very Miss Havisham at the outset to say I won’t attempt to be kind.

I am not angry at your rather bizarre interpretation of Miss Havisham — a character most memorable in literature. You represent a very ‘male view’ of a woman who wears only one shoe because the man she was going to marry has betrayed her and the news has come to her while she is getting ready to walk the aisle to the altar. That’s a transgression.

It is a patriarchal view of women as “bleeding inside, silently” if they are abandoned by men.

Charles Dickens, in his Great Expectations, proved himself to be more than equal to women writers in terms of creating feminist characters in Miss Havisham and Estella, who have been hailed by many men like you as wounded women who perhaps will benefit from human warmth.

That’s a reductive approach, if I may say so.

Transgressions like wearing her wedding dress that is yellowing have always been dismissed as behaviour patterns emanating from depression. Hence, you find women who are overdressed and caked with makeup as ‘wounded’.  Instead of looking at it as being against patriarchal paradigms, a choice that women should exercise without a regressive analysis by men who are unable to understand that our constitution gives us the right to freedom of expression, you chose to dismiss the revolt as a sign of agony that fits in with your worldview. Men in shining armours and damsels in distress living in caged existence belong to fantasia. 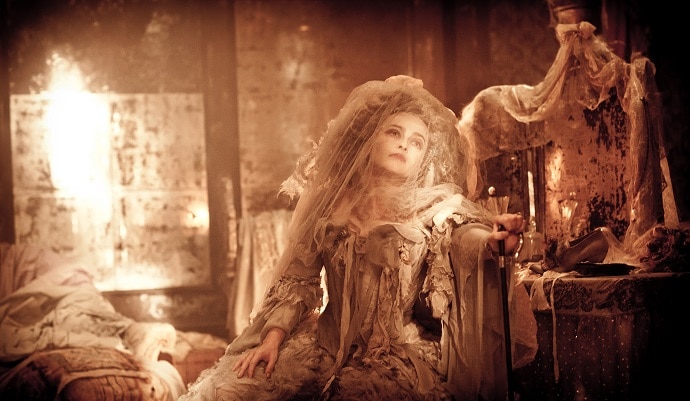 Miss Havisham's character is not in the least a 'wounded woman'. (Photo: Movie Still/Great Expectations)

In your reading of a character that represents transgressions and also, in your apology that you posted on Sunday on your Instagram story, the irony is apparent.

In your etymology, I must be a wounded woman, too.

“In seclusion, she had secluded herself from a thousand natural and healing influences; that, her mind, brooding solitary, had grown diseased, as all minds do and must and will that reverse the appointed order of their Maker...”, she says.

That’s brave. To attempt to reverse the appointed order. Because even in the day and age where we have witnessed the catharsis of movements such as #MeToo, women are pitted against men who are patronising in their assessment of us.

This is a view that strips women of the power of making a choice. Some history has bypassed you. For most of my adult life, I have tried to live by a phrase that first emerged during the second wave of feminism — personal is political. Even love is because love mostly operates under the conformist roles of gender assigned by society. I would again quote from Great Expectations:

“I am tired," said Miss Havisham. "I want diversion, and I have done with men and women. Play."

You might blame her for Estella’s behaviour. But Miss Havisham prepared her for the world’s inequalities when it comes to love.

I am a feminist. We have fought hard for our rights. I would not have paid much attention to your post except that in the feminist framework, it represents a rather pathetic attitude of men towards women. Also, I like Miss Havisham very much.

Besides, your post on wounded women quoting Miss Havisham ruined a perfect Saturday afternoon for me that I had very much intended to spend with Sabbath’s Theatre by Philip Roth. The book features one Drenka, who inspires lust in Mickey Sabbath, an ageing puppeteer. She is scandalous. And perhaps in the myopic vision that frames women, she wouldn’t fit a feminist role model character but then that’s the problem of the framework dictated by men who subscribe to the patronising side of patriarchy. Such women present a challenge to the intellectual arrogance of men that is hostage to patriarchy. They represent irreverence, contrarianism and freedom. That’s a lot for the old order to take.

Maybe you should read some books with feminist characters. You can do it. You don’t have to appropriate characters and strip them of their politics.

Let’s take the case of Medusa.

“Medusa, for your pride this has been done. Your face is now so terrible to behold that the mere sight of it will turn a man to stone,” proclaimed the goddess, “Even you, Medusa, should you seek your reflection, shall turn to rock the instant you see your face,” Athena allegedly said this as she sent Medusa with her hair of snakes “to live with the blind monsters — the gorgon sisters— at the ends of the earth, so that no innocents would be accidentally turned to stone at the sight of her.”

But Athena, the goddess of war, wasn’t punishing Medusa who was raped in her temple.

She was giving her the power to confront men. 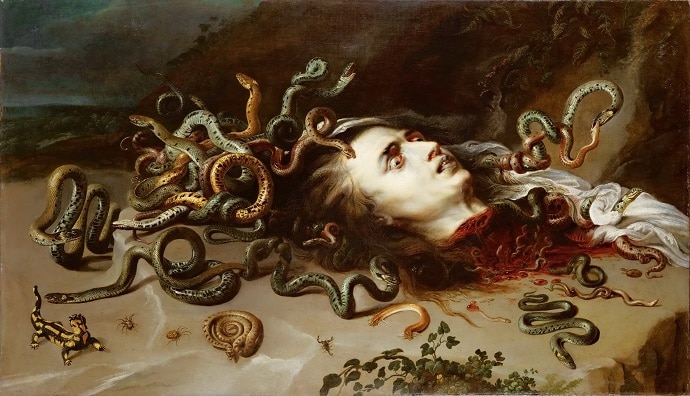 Monster? Or empowered? Athena wasn’t punishing Medusa. She was giving her the power to confront men. (Photo: Wikimedia Commons)

According to Annis Pratt, ‘the beautiful and powerful women of the pre-Hellenic religions are made to seem horrific and then raped, decapitated or destroyed.’

And then, they become wounded women.

These are patriarchal portrayals and deserve re-evaluation.

When I first came across Medusa in my childhood, I liked her. I was fascinated with her gaze, despite what a male hegemonic viewpoint that dominated the educational discourse would have me believe — there was this woman from whose head snakes hissed.

It is sad that you usurp characters that are so powerful and transgress that to use for your collections that you title as “radical clothing choices” is reducing them to your ill-informed assessment of their stories. This is not the first time a male designer has said things that could be branded as sexist and misogynist, both of which are grave matters.

Recently, Rohit Bal reportedly called a woman designer “butt ugly” on social media after she asked him about his allegation of plagiarism over a silhouette. I was abused too but this isn’t about me. It is about the easy entitlement of men who are heavyweights in fashion and claim to be inspired by powerful women — but then call them wounded and ugly rather than indulging in engagement in a civil manner. I could go on but I want to suggest a poem called Havisham by Carol Ann Duffy about the anger the character must have felt. She doesn’t use the moniker of Miss only to rid the character of the narrative of how she was jilted. Miss Havisham, because she rebelled, she was made to descend into madness. That’s how the world sees her. But the poet removes the Miss to remove the gender and therefore of the perceptions that betrayals render women as wounded and bleeding.

I am copying the poem here.

“Beloved sweetheart bastard. Not a day since then

I haven’t wished him dead. Prayed for it

ropes on the back of my hands I could strangle with.

in bed cawing Nooooo at the wall; the dress

yellowing, trembling if I open the wardrobe;

the slewed mirror, full-length, her, myself, who did this

to me? Puce curses that are sounds not words.

Some nights better, the lost body over me,

my fluent tongue in its mouth in its ear

then down till I suddenly bite awake.

Love’s hate behind a white veil; a red balloon bursting

in my face. Bang. I stabbed at a wedding cake.

Give me a male corpse for a long slow honeymoon.

Don’t think it’s only the heart that b-b-b-breaks.”

Maybe, Mr Sabyasachi, you can read this and for a change, think about alliteration and conflicting words and make sense of the character of Miss Havisham — who remains one of the most powerful and memorable characters.

A woman’s experience is valid. We have fought hard for our rights and when we are viewed as ‘wounded’ because we choose to overdress and wear makeup, it angers us. Anger is valid. Agitation is valid.

And we don’t need human warmth. We need equal participation and recognition.

Also read: Open Letter to my fellow Muslims: Please step out of the ‘we are oppressed’ narrative. Fix what you can!