The great big Indian lie: Why do we make divorce such a big deal when most of our marriages suck?

In India, out of 1000 marriages, only 13 result in divorce. But given the abysmal state of the lying-cheating-beating Indian shaadi, this is simply sad news.

A storm was predicted.

I stood on the terrace of my home, in the city of my birth, watching our neighbour’s newly recruited full-time house help make a dash for the clothesline, heavy with almost-dried clothes. Baby knickers, floral cotton nighties, men’s shirts and a host of innerwear, some discoloured.

"My husband... he was a drunkard and used to beat me mercilessly, get drunk on my hard-earned money, bring other women home..." she wiped her eyes with the edge of her chiffon dupatta that she had demurely draped around her shrunken cleavage, taking a deep breath, adding, "My son, he’s 12. He studies in a government boarding. I lost my father and was raised by my maternal uncle who got me married. His concern would have been one less mouth to feed. The groom was my uncle's choice."

I shouted to my 10-year-old foster sister to ride her bicycle slowly — scared she may fall.

"I have been married 13 years. My boy was two when I walked out — battered, my left arm broken. Since then, I have been working in people’s homes in Kolkata — sometimes cooking, sometimes scrubbing soiled utensils and baby bottoms. I have to send Rs 3000 for my son’s education every month... plus food and other expenses. I haven’t been able to go see him in a while. My mother also needs cash for her medical expenses... She is almost bedridden now."

"It is better — better alone than with a rotten apple," I touched her left arm, gently, adding under my breath, "The way Geru is better off too. He would have sold her by now — that monster of a father she had. The way he would beat up her mother who worked in our Delhi home as a cook." 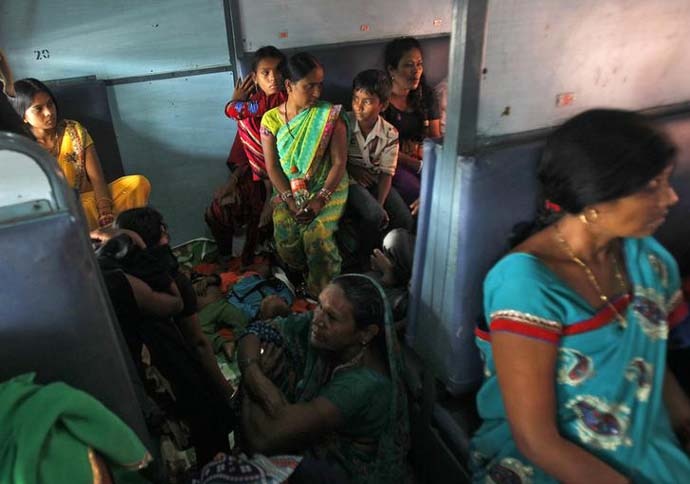 For many Indian women, staying in a terrible marriage is no choice. It is pure compulsion. (Photo: Reuters)

The woman adjusted her ankle-length nightie. Then, picking up her plastic bucket stuffed with clothes, she wiped her face, saying slowly, "I insisted on a registry marriage. Fought with my uncle..."

There was a streak of fierce, purple lightning.

"Great! You are divorced... I hope you have taken a legal..." I had just started speaking, when the domestic help interrupted, saying, "I am frightened that my son will blame me when he grows up, and point fingers at my character. Things would be starkly different if I had a male protector — maybe my own father or a brother."

"I won’t give him a divorce. Let him also never get married. What's the point anyway... Will my fate change?" she asked, biting her chapped lips.

Before I could say anything else, she glanced back over her shoulders once and said, "Everyone isn’t lucky, Didi, like the bodo lok (the affluent) and educated. Now they say Priyanka maybe getting a divorce. Boudi (sister-in-law) was watching the news on TV. For them it is nothing though... They face no social stigma. Money is all that matters perhaps."

However, Priyanka Chopra and Nick Jonas are reportedly all set to sue the US magazine that recently ran an article which went viral on social media, claiming the couple were headed for a divorce within 117 days of their big, fat, multi-continent and many designer outfits and myriad Instagram posts-wedding. OK! magazine quoted a source, saying, "They've been fighting about everything — work, partying, spending time together. The bottom line is that Nick and Priyanka rushed into things...And now they're paying the price. Their marriage is hanging by a thread."

According to a report on an entertainment website, Priyanka is all set to unleash her legal team to sue the rumour manufacturing magazine for spreading false information.

Each of these remains uncomfirmed speculation though, churned off a never-ending gossip machine. Whether PC and Nick Jonas eventually maintain the sacred "saath janm saath rehne ka janmo janmantar wala vada" (the promise to be kept through several lifetimes of being together for seven lives) remains to be seen, most importantly, by them.

But why on earth would anyone getting a divorce anyway — even if within months of the marriage — come as such an unholy, wide-eyed surprise in a country and culture where the very institution of marriage today seems to be under severe threat? A country where open marriages/relationships and infidelity is commonplace, as apparent on popular dating apps like Tinder, where every second man I swipe right tells me — within a split second — that he is married? One of the cheesiest desi pick-up lines from married men — "can we just be friends?" (Photo: Twitter)

When I rebuke them, saying that my profile clearly specifies my stand against cheating, they sneakily add the line — which I can safely classify as the cheesiest desi pick-up line, "Can we be just friends?"

The word "just" is a safe bet. A sanitisation practice. A slimy, superficial, spineless bait.

Every year, world organisations such as the UN record global divorce rates — it has increased by upto 251.8% since 1960.

In India, the divorce rate is less than 1%.

Whose victory are we celebrating? Which win matters?

Also read: If Priyanka Chopra were Priyank Chopra, would there have been so much to write about?