Nobel Prize season is here: What you need to know (details and controversies)

Numerous events, including Halloween, hot coffees and award seasons, are marked by the onset of October. The Nobel Prize is another significant event that makes October memorable.

6 days and 6 awards: new names from across the world are added to the most prestigious group of scholars, authors, economists and human rights acitivists.

This year, the Nobel Prize season kicked off on 3 October, 2022, with Svante Paabo winning the award in physiology or medicine for his discoveries on human evolution.

Someone is receiving exciting news from Thomas Perlmann, the Secretary of the medicine committee.

Find out who will receive this year’s #NobelPrize in Physiology or Medicine – we’re just moments away from breaking the news.

Before going into more details about this year's awards, here are a few pointers about the Nobel Prize:

1. This year's Routine: After the medicine and physics awards, here is the line-up of the next awards line-up:

2. A will that formed the Nobel Prize: It was Alfred Nobel's dying will from 1895, which is responsible for the establishment of this award.

Who was Alfred Bernhard Nobel?  Born on 21st October, 1833,  Alfred was a Swedish chemist, engineer, inventor, businessman and philanthropist. Apart from bequeathing his fortune to establish the Nobel Prize, he was also known for several contributions he made to science. He had a record of holding 355 patents in his lifetime. His most famous patent was dynamite patented in 1867. 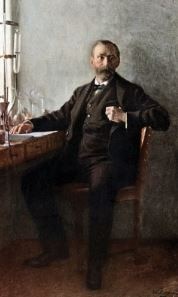 4. Can you nominate a candidate for the Nobel Prize? No, not everyone is eligible to apply for a Noble Prize.

5. Controversies: The controversies surrounding Nobel Prizes go all the way back to the time they were started, leading to their maker, Nobel.

The Merchant of Death:  As Nobel was the inverter of dynamite and other explosives, he didn’t have the best public image. In fact, when his brother died, a French newspaper confused him with Alfred and used the headline “The merchant of death is dead.” Some claimed that Nobel "became rich by finding ways to kill more people faster than ever before.”

This is what probably motivated Nobel to create the prizes in order to enhance his legacy.

The men populated awards: The Nobel Prize is criticised to be one of the most sexist awards, with only 58 women receiving awards out of the 900 recipients so far. Out of all the cases of undermining women, the case of Jocelyn Bell Burnell was the one well known.

What happened with Jocelyn Bell Burner? Jocelyn Bell Burnell is known for discovering pulsars (highly magnetized rotating neutron stars) in 1967. She later published a paper with her adviser, Antony Hewish. And guess who won the prize? Hewish and his other colleague, Martin Ryle, were given the Nobel Prize for Physics in 1974 for the ‘discovery of pulsars’.

Adolf Hitler for the Nobel peace prize?? You are probably laughing, and wondering what the reality of this situation is. However, Joseph Stalin and Hitler were actually nominated for the Nobel Peace Prize. In 1939, Hiter was actually nominated as a joke by a Swedish legislator, which was not funny to everyone. His nomination followed an uproar and was later removed.
However, Soviet leader Joseph Stalin’s nominations in 1945 and 1948 were made in all seriousness.

Even though the committee claims that the award goes to the deserving candidates, some Indians are still angry for not giving Mahatma Gandhi the Nobel Peace Prize even though he was nominated five times.

This year's Noble Prizes so far:

Svante Paabo: Returning to the winner from yesterday, Svante Paabo, received a prize for his research on human evolution.

The Nobel Committee's secretary, Thomas Perlmann, made the announcement on Monday at Stockholm, Sweden's Karolinska Institute.

BREAKING NEWS:
The 2022 #NobelPrize in Physiology or Medicine has been awarded to Svante Pääbo “for his discoveries concerning the genomes of extinct hominins and human evolution.” pic.twitter.com/fGFYYnCO6J

Paabo has led studies comparing the genomes of contemporary people with our nearest extinct ancestors, the Neanderthals and Denisovans, demonstrating that there occurred inter-specific hybridization.

Latest Update: The Nobel Prize in physics for 2022 has been awarded to Alain Aspect, John F Clauser and Anton Zeilinger for their work on quantum mechanics, the Royal Swedish Academy of Sciences announced today on October 4, 2022.

BREAKING NEWS:
The Royal Swedish Academy of Sciences has decided to award the 2022 #NobelPrize in Physics to Alain Aspect, John F. Clauser and Anton Zeilinger. pic.twitter.com/RI4CJv6JhZ