Afghanistan's ghastly drama: What lies ahead for the country's minorities

What Hindus and Sikhs are facing in Afghanistan is a repeat of the experience of non-Muslims in Pakistan and Bangladesh.

The killing of 17 Hindus and Sikhs in an explosion in the eastern Afghan city of Jalalabad on July 1 last was probably a final attempt to obliterate the last vestige of pre-Islamic civilisation which held a complete sway over the landlocked nation till about eight centuries ago. On the following day (July 2), the Islamic state claimed responsibility for the suicide bombing. The number of Hindus and Sikh families in Afghanistan is estimated at less than 300 [Photo: Reuters]

The killings have shaken the small community of the Hindu-Sikhs, who are planning en masse migration from their homeland.

“I am clear that we cannot live here anymore”, Tejvir Singh, 35, whose uncle was killed in the blast, told the media. Singh who is the secretary of national panel of Hindus and Sikhs further said, “Our religious practices will not be tolerated by the Islamic terrorists”.

The number of Hindus and Sikh families in Afghanistan is estimated at less than 300, and their total population below 1,000.

Some of the frightened Hindus and Sikhs have sought shelter at the Indian consulate, following the recent attack at Jalalabad. What Hindus and Sikhs are facing in Afghanistan is a repeat of the experience of non-Muslims in Pakistan and Bangladesh [Photo: Reuters]

Speaking to media, Sardar Baldev Singh, who owns a book and textile ship in the city, said, “We are left with two choices: to leave for India or convert to Islam.”

What Hindus and Sikhs are facing in Afghanistan is a repeat of the experience of non-Muslims in Pakistan and Bangladesh. In 1947, the share of Hindus in Bangladesh (then East Pakistan) was 30 per cent and in Pakistan, 24 per cent. Today, both Bangladesh and Pakistan have roughly a population of 20 crore each.

Going by their percentage share of population at the time of Partition, the number of Hindus in Bangladesh now should be around six crore and in Pakistan 4.80 crores. Together, both the countries should have a total of around 11 crore Hindus and Sikhs.

However, the total number of Hindus/Sikhs in both the countries does not add even to two crores today. What happened to the balance nine crores? Obviously they were either forced to convert to Islam, or migrate to escape persecution.

The remnants of the pre-Islamic civilisation in the region have been vandalised and destroyed over the centuries. The vandals claimed inspiration from Islam. Mahmud Ghazni (971-1030) during the solemn ceremony of receiving caliphate honours on the accession to the throne of Ghazni had taken a vow to wage jihad every year against the idolaters of India. Mahmud lead over a dozen campaigns into India during his 32 years reign. The Sultan had three motives in his Indian raids: to slaughter heathens, destroy their places of worship and to gather plunder. 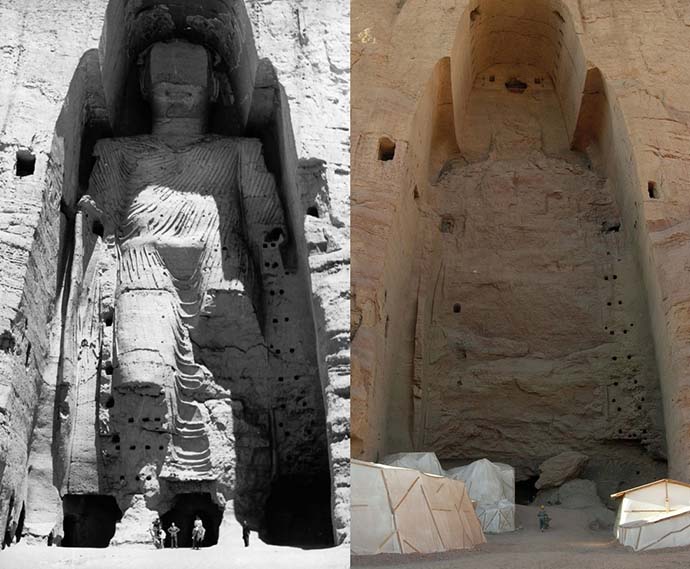 In March 2001, the Taliban, on orders from Mullah Mohammed Omar dynamited and destroyed the fourth and fifth century monumental statues of Gautam Buddha carved into the side of a cliff in the Bamyan Valley in the Hazarajat region of central Afghanistan.

The statues represented the classic blended style of Gandhara art and were 115 feet and 174 feet tall respectively. For the Islamic zealots, they were neither works of art nor a historical heritage. To them the statues were kufur and deserved to be destroyed, as per dictates of their “faith”.

Up to 12th century, Afghanistan (along with present day Pakistan and Kashmir Valley) was predominantly Buddhist and Hindu.

In The Afghans, Willem Vogelsang writes: “During the eighth and ninth centuries AD the eastern parts of modern Afghanistan were still in the hands of non-Muslim rulers. Most of them were either Hindus or Buddhists”.

Sultan Mahmud of Ghazni began crossing the Indus River into Hindustan (land of Hindus) in the tenth century. The military incursions assured the domination of Sunni Islam in what is now Afghanistan and Pakistan.

In Afghanistan: A new history, Martin Ewans notes that Mahmud who ruled between 998 and 1030, expelled the Hindus from Gandhara, and succeeded in conquering the territory stretching from the Caspian Sea to Varanasi, Bokhara and Samarkand. He encouraged mass conversions to Islam, looted Hindu temples and carried off immense booty, earning for himself, depending on the viewpoint of the observer, the titles of “Image-breaker” or “scourge of India”.

Mahmud died almost a thousand years ago. But that sick mindset continues to thrive. The recent explosion in Jalalabad is just one more deadly episode in the ghastly drama that has no end in sight.

#Islamic Terror, #Sikhs, #ISIS, #Afghanistan
The views and opinions expressed in this article are those of the authors and do not necessarily reflect the official policy or position of DailyO.in or the India Today Group. The writers are solely responsible for any claims arising out of the contents of this article.