Will India be able to balance ties with US without damaging relations with Iran and Russia?

The postponement of 2+2 dialogue is a real test for Indian diplomacy.

In the first week of July, two Indian ministers were supposed to fly to the US to participate in the India-US 2+2 dialogue. However, the dialogue now stands postponed.

This process of dialogue is a new idea in the context of India-US relations and is being viewed as an important mechanism to carry forward the process of constructive engagement.

So, will the postponement impact these relations adversely? Is the US trying to ramp up pressure on India to toe its line in international politics? Would India succumb to the US pressure? The development also gains importance because of some straight talks and clear signalling by the US ambassador to the UN, Nikki Haley, during her recent visit to New Delhi. External affairs minister Sushma Swaraj and defence minister Nirmala Sitharaman were scheduled to travel to the US for the 2+2 dialogue.

India has already established this mechanism with a few other countries. The inaugural 2+2 dialogue was scheduled to be held in Washington during April, but was postponed as then the US secretary of state-designate, Mike Pompeo (after US President Trump had fired Rex Tillerson from) had not taken over the charge and was awaiting the confirmation of his appointment by the US Senate.

In fact, during April, the US was keen to hold this dialogue. However, India firmly said no because it was not ready to water down the stature of this meeting. Now the US secretary of state Mike Pompeo plans to travel to North Korea and that's the reason behind postponing the talks. However, there is a possibility that the US was convinced India is unlikely to toe its line and hence the postponement.

This dialogue was announced in August 2017 in a White House statement following a telephone call between President Trump and Prime Minister Narendra Modi.

“The leaders resolved to enhance peace and stability across the Indo-Pacific region by establishing a new 2+2 ministerial dialogue that will elevate their strategic consultations,” the White House had said in the statement. 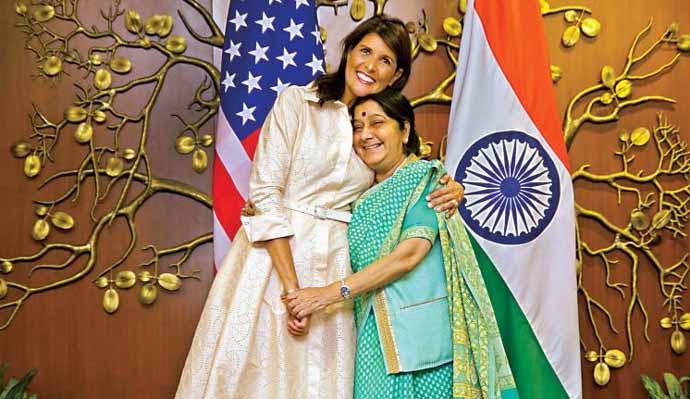 Nikki Haley, during her recent visit to New Delhi, clearly spelt out the 'Iran message' to India.

In order to ensure that this dialogue becomes a focal point of interaction between the two countries, it was decided to scrap the India-US Strategic and Commercial Dialogue, once described by the US State Department as the "signature mechanism for advancing the United States’ and India’s shared priorities".

As a prelude to this dialogue, India had begun with various high-level visits to the US. A few months ago, foreign secretary Vijay Gokhale and defence secretary Sanjay Mitra had visited the US possibility to set the ground rules. Also, during March 2018, India’s NSA Ajit Doval had visited the US. There are some specific issues where both the states do not have a similar view and involve signing of two foundational agreements for defence cooperation.

For long, the US has been pushing India do sign the two agreements — Communications Compatibility and Security Agreement (COMCASA) and Basic Exchange and Cooperation Agreement (BECA).

In 2016, India had signed the third foundational agreement — Logistical Exchange Memorandum of Agreement (LEMOA), which has since been operationalised.

As per this pact, both the states have rights to use each other’s ports and airfields for refuelling and other activities.

In addition, India is also keen to purchase military systems like drones, helicopters etc, from the US and such purchase would depend on India signing such agreements.

While BECA is about sharing geospatial information, which actually amounts to giving all important information about our strategic assets, India obviously wants to tweak these agreements to ensure that its interests are maintained.

The US is very keen to ensure that Iran gets totally isolated, hence wants India to help the latter in this regard. The Iran message was delivered very clearly by Haley during her recent visit to New Delhi. She argued that today the world is united against Iran to curb its nuclear ambitions and is also convinced that Iran is spreading terrorism and needs to be taught a lesson.

In this regard, the US wants India to stop the purchase of oil from Iran. During the Obama years, India was required to bring down oil imports at an average rate of 20 per cent every six months. But Trump has been insisting that this has to go down to “zero”. It is possible that the postponing of the 2+2 dialogue could be a pressure tactic against India in this regard.

However, it is not in the interest of India to dump Iran. India has already pledged more than $500 million to develop the port of Chabahar — roughly 1,800km from Tehran. Obviously, India has major strategic interest in developing this port. It also has interests in the Farzad B oil field. Prime Minister Modi had a very successful visit to Iran during May 2016.

India fully understands China’s interest in the Chabahar port and towards engagement of Iran as such. Naturally, it is not in position to follow any US dictate against Iran.

India also needs to make the US aware about its relevance for the US-Afghanistan strategy. Today, Russian stakes are more than 65 per cent in India’s arms import while the US is around 15 per cent. Can the US afford to overlook their prospects for defence businesses with India?

The postponement of 2+2 dialogue is a real test for Indian diplomacy. Only time will tell how India balances its relationship with the US without damaging its ties with Iran and Russia

Post your comment
#Sushma Swaraj, #Nikki Haley, #India-US, #2+2 dialogue
The views and opinions expressed in this article are those of the authors and do not necessarily reflect the official policy or position of DailyO.in or the India Today Group. The writers are solely responsible for any claims arising out of the contents of this article.