With Trump or without Trump, Washington needs Delhi more than Delhi needs Washington.

The "2+2 dialogue" scheduled for early July has been indefinitely postponed by the US citing "unavoidable reasons". A day before the cancellation, Donald Trump accused India of charging tariffs as high as 100 per cent on American products. The meeting was to have been attended by the foreign and defence ministers of India and their counterparts from the US. 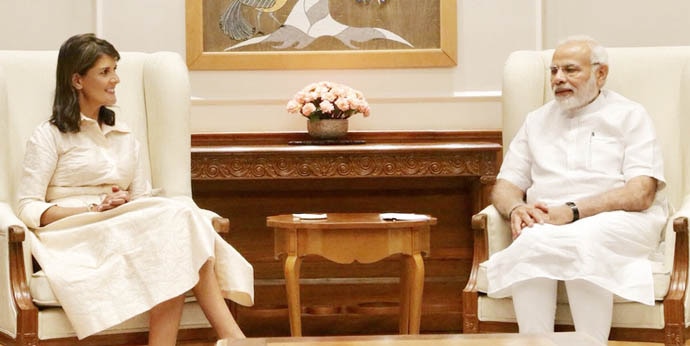 As a prelude to the meeting, a team from the US was in India last week, seeking to allay India's fears on the signing of the COMCASA (Communications Compatibility and Security Agreement). The original form was CISMOA (Communication and Information on Security Memorandum of Agreement) but was changed to the Indian specific COMCASA.

COMCASA is to provide a legal framework for the transfer of communication security equipment to facilitate interoperability between the forces. This is part of three agreements proposed by the US to indicate enhanced ties and transfer of high-end technology items to India. India had already signed LEMOA (Logistics Exchange Memorandum of Agreement), which opened the two countries to replenish from each other's bases. The third agreement under consideration is BECA (Basic Exchange and Cooperation Agreement for Geo Spatial Cooperation).

The aim behind COMCASA is to enable installing high-end communication equipment on platforms being sold to India. This would open doors for sale of armed Predator Drones, which would also be installed in aircraft being procured from them. India has its own doubts, which include opening up its bases for US personnel to check the systems, the ability of the US to monitor Indian communications and its compatibility with Russian origin equipment.

Simultaneously, the US seeks to draw India into their dependency by pulling it away from Russia. It had therefore offered India the Patriot Missile systems in lieu of the Russian S-400, which India refused and then subsequently the THAAD missile systems. The CAATSA (Countering American Adversaries Through Sanctions Act) has been passed by the US Senate, without considering Indian requests, thus opening India to US sanctions in case it procures military hardware from Russia. Simultaneously, the US has asked India to stop its oil purchases from Iran by November 4, as they have placed sanctions on Iran.

To further pull India into their lap, Nikki Haley, the US permanent representative to the UN, a close confidant of Trump is visiting India. Her agenda appears to be to convey the message on oil imports and purchase of the S-400 missile systems.

"I would encourage them (India) to rethink their relationship with Iran," she said publicly.

The timing of her visit is evident. It was as a prelude to the now cancelled "2+2" meeting. Probably she would have briefed the PM on the true reasons for the postponement of the meeting. India is also presently in a trade war with the US, which could only worsen with time. Enhancing tariffs on both sides could take the present relationship downhill in no time.

The unreliability of Trump as a leader is well known. He has been changing his decisions and aides faster than anyone else in history. He has in his short stint in office angered all his allies, who have drifted away. Modi, who has had multiple meetings with Putin and Xi as also earlier with Obama, understanding the wavering Trump, has avoided the US. He has left the handling of Indo-US issues to his ministers. He has also not offered to host Trump in India.

India may be a security partner of the US but is neither bound by Washington's demands nor by its decisions. It is clearly not dependent on the US for its own security needs as NATO is. India may hold exercises with the US but has categorically stated that it would not operate under US command nor would it engage in joint patrols with it. All its purchases, while boosting its own defence capabilities also enable the US to reduce its unemployment. It does not seek weapons under aid but purchases them as per market costs.

The fact remains that US sanctions against Russia and Iran are for their own good and are neither backed by the UN nor the world community. Seeking to pull India into their personal battles is neither justified nor legally valid. If India bends, it would break its ties with its traditional allies.

The US has been known to create relations and subsequently discard them when the situation changes. Its traditional allies have now begun charting their own paths, ignoring the US. Currently, it needs India for multiple reasons. Indian investments in Afghanistan assist the US in its seeking to develop the nation. India is the only nation in Asia with the military and economic power to challenge Chinese hegemony in the region, hence, the US desperately seeks Indian military cooperation. The present strategy of the US appears to be to use India to hit back at Russia and Iran.

India cannot ignore its time-tested international relationships based on its own national interest for US' personal enmities. India-Russia relations go back decades. Russia has always stood by India. Presently over 60 per cent of Indian military equipment is of Russian origin. While presently the US and Russia are at different ends of the spectrum, the US can change direction as it has done with North Korea. If India falls under US influence and drops the plan to purchase S-400, it would never be able to restore its ties with Russia.

Indian investment in Chabahar port is immense and the port provides India with multiple strategic benefits. India had signed an agreement with Iran after the visit President Hassan Rouhani to India to increase its oil purchases from the country.

Stopping it, on US demands, would push Iran away from India and would damage its agreement on the Chabahar port. China already in multiple conflicts with the US and the largest purchaser of oil from Iran would never accede to US requests. If India does so, it would almost gift the Chabahar port to China.

India needs to pursue an independent foreign policy, despite its growing proximity to the US.

As a first step it should not sign the COMCASA, underlining its disagreement with US' unilateral policies.

Both India and the US need one another, yet both are independent. If the US can toe its own foreign policy, so should India. It should clearly avoid toeing the US line.

The "2+2 meeting" should have been the forum where the message would have gone loud and clear. The US may have understood the Indian mind and determination. If the US is unwilling to listen, then India has limited choices but to pursue its own national interests.

It would thus have to bypass US sanctions or if it comes to the worst case scenario, manage with it.

Trump has about three and a half years left as president. The US would continue to need India more than India needs it, both during and after Trump. If the US does not accept Indian national interests now, it would after the presidency changes. India cannot be ignored, it would need to be wooed. If it backs down now, it would always be taken for granted and would lose credibility in the international environment and also its strategic leverages.

Also read: Why Khaleda Zia’s party is hoping for India’s help in the upcoming Bangladesh polls

#India-iran relations, #US-India Ties, #Nikki Haley, #2+2 dialogue
The views and opinions expressed in this article are those of the authors and do not necessarily reflect the official policy or position of DailyO.in or the India Today Group. The writers are solely responsible for any claims arising out of the contents of this article.