Narendra Modi’s chances of getting a second term: Here’s what the numbers say

Prime Minister Narendra Modi’s popularity has rebounded in states where the BJP lost to the Congress less than half a year ago.

A probability analysis conducted by India Today’s Political Stock Exchange (PSE) shows the National Democratic Alliance (NDA) government stands a 50% chance to return to power. The survey, based on data aggregated from Axis-My-India's PSE trackers over the past six months, predicts a one in two chance for the NDA to again form the government at the Centre. There is a one in two chance for the NDA to once again form the government at the Centre. (Source: India Today)

Statistician and director of Chennai Mathematical Institute, Rajeeva Karandikar, examined the expansive material to extrapolate who could lead the next government in May 2019.

Karandikar’s estimates suggest the NDA retains a 50% chance to secure a majority in the 17th Lok Sabha.

The probability of the BJP-led coalition crossing the 250-mark in the 543-seat Lok Sabha is nearly three-fourths, the analysis revealed. On the other hand, the chance of the NDA staying below 220 is nine per cent. Voters in states holding a direct contest between the two main national parties are most likely to cast their vote in favour of their preferred PM face, and not the candidates.

Looking at the numbers, the NDA is ahead of the UPA.

Chances for the Mahagathbandhan

The report showed the Mahagathbandhan stands a 16% chance of getting a majority.

The analysis suggested that the chances of this grand Opposition alliance crossing the 250-mark was 34%.

A significant finding of the survey — the net-satisfaction levels — shows Prime Minister Narendra Modi’s popularity has rebounded in states where the BJP lost to the Congress less than half a year ago.

Modi’s net-satisfaction levels have been found to be highest in Himachal Pradesh — at 36%. The figure was obtained by deducting 32% of dissatisfied voters from 68% of satisfied voters.

Rajasthan — where the Congress unseated the BJP in Assembly elections in December — also delivered positive NSI ratings for the PM. Net satisfaction with Modi in the state stood at 32%, the PSE data showed.

In Madhya Pradesh, another Congress-ruled state, 26% of voters favoured the PM on the NSI index. 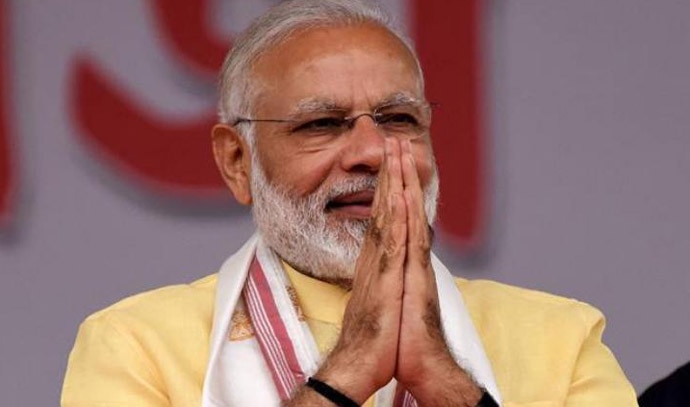 Modi’s net-satisfaction levels have been found to be highest in Himachal Pradesh — at 36%. (Source: Reuters)

In Uttar Pradesh and Haryana, the NSI with the PM is recorded at 26% each.

But most voters in Punjab are not enthusiastic about Modi, where his NSI registered a rating of minus 10%, the lowest in northern India.

The NSI data, however, found Modi's popularity in the negative region in most of southern India.

With just 28% of respondents expressing satisfaction and 72% dissatisfaction with the PM, Kerala delivered the worst outcome — a net score-card of minus 44%.

Voter sentiments in neighbouring Andhra Pradesh were divided evenly — an NSI of zero per cent over the PM's performance.

Also read: BJP Manifesto Decoded: How the document mirrors Narendra Modi is calm about his achievements, sincere about his commitments