Snatching Lok Sabha Victory: Here’s how the BJP can manage the magic figure of 272

Back to back by-poll losses in Uttar Pradesh, the failure to form a government in Karnataka, Assembly poll debacles in Madhya Pradesh, Chhattisgarh and Rajasthan, all of which had BJP governments, and discontent among the constituents of the National Democratic Alliance (NDA) such as the Shiv Sena, Janata Dal (United) and Apna Dal, have put the ruling dispensation on the backfoot. Recent poll setbacks have set the BJP on the backfoot. But the numbers still stack up in the party's favour. (Source: Reuters)

All is, however, still not lost for the BJP camp.

In fact, the BJP is still the frontrunner to form the government post-the 2019 General Elections.

A look at the India Today Group-Karvy Insights biannual Mood of the Nation (MOTN) survey shows the BJP is set to return to the Centre, albeit with support from allies and not as a majority government as in 2014.

According to the survey, the BJP will end up getting around 202 seats, falling short of the majority mark by around 70-odd seats. 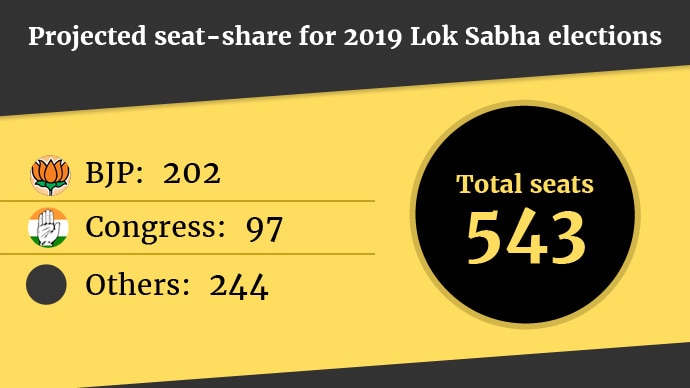 The India Today Group-Karvy Insights Mood of the Nation survey.

Here are the five parties that the BJP should look to in order to form the government in case of falling short of the majority mark:

The Tamil Nadu-based party got as many as 37 seats in the 2014 Lok Sabha elections. Tamil Nadu sends 39 MPs to Parliament.

In the aftermath of the passing of AIADMK supremo J Jayalalithaa, the BJP helped the warring factions, led by Edappadi K Palaniswami and O Panneerselvam, unite to thwart the threat posed by a third rebel AIADMK faction, led by TTV Dinakaran, the nephew of Jayalalithaa's aide Sasikala. The BJP is now reported to be trying to get the Dinakaran faction back into the AIADMK fold to avoid a splitting of votes. A number of income tax raids have been conducted reportedly to keep AIADMK leaders on tenterhooks and ensure the status quo is not disturbed.

Mayawati’s party, the BSP, is contesting Lok Sabha elections from Uttar Pradesh on 38 seats. Given the success the party achieved by tying up with the Samajwadi Party (SP) in the by-polls held in 2018, it is likely the party would end up with a significant number of seats in its kitty post-the Lok Sabha elections.

The speech Mayawati gave on January 12 was a sign that the party wants to be seen as equidistant from both the Congress and the BJP.

Which also means the party would presumably be open to offers from both parties if the possibility of an alliance emerges.

If the BJP emerges as the single-largest party, Mayawati could well hop onto Modi’s boat (this may be helpful for a smooth sail through some pending CBI cases).

Of course, Mayawati would demand her pound of flesh from the BJP for the same. 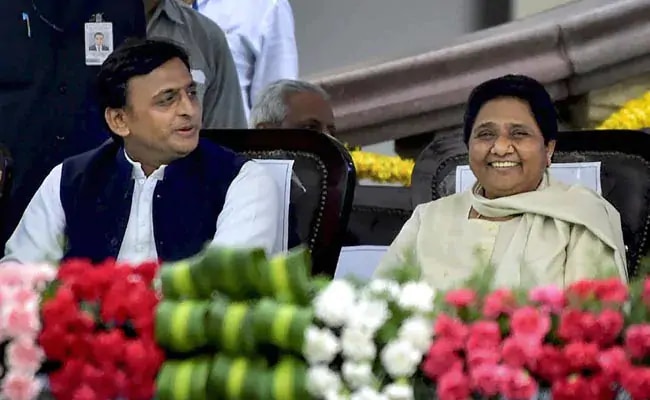 The SP-BSP have so far decided to remain equidistant from the Congress and the BJP. (Photo: PTI)

Under Akhilesh Yadav’s leadership, the SP is contesting elections on 37 seats. Akhilesh's stand on going with the BJP and Congress remains much the same as the BSP's.

The national ambitions of Akhilesh’s father, Mulayam Singh Yadav, are well known. He may demand a plum post in lieu of the support he extends to the BJP.

With the CBI dropping hints that it will investigate the alleged role of former chief minister Akhilesh Yadav in the illegal mining scam, it is clear that the BJP too is keeping some bargaining chips in its hands.

The party’s performance in the 2018 Assembly elections, where it won 88 of the 119 Assembly seats, and the popularity of TRS leader K Chandrashekar Rao (KCR) show, the party is headed for a fine run in the General Elections too.

Perhaps the Modi government can reach out to KCR, with the offer of special status for Telangana. The Telangana Rashtra Samithi under KCR is likely to perform well in the national elections. (Source: PTI)

KCR won the Assembly election on the basis of his welfare schemes and by appealing to the regional sentiments of Telangana. It would not be difficult for him to justify his tie-up with the BJP with a special status promise.

The BJP had apparently sent its feelers to the Naveen Patnaik-led BJD by bestowing the Padma Shri award on US-based writer Gita Mehta, who happens to be Naveen Patnaik’s sister.

Mehta has declined the award, but the BJP can still try to get the BJD on board once the election results are announced. In 2014, the party won 20 of the 21 Lok Sabha seats in Odisha and there is hardly any significant challenge to the BJD even this time around.

If the BJP manages to get these five parties on board, it will be over and above the allies it had, which includes the Janata Dal (United), Apna Dal, Lok Janshakti Party, Akali Dal et al.

So, while Modi and his party campaign for votes, diplomatic negotiations should begin with these parties to forge a government.

Of course, the party also needs to ensure its current allies do not desert it while it is trying to forage for the numbers.

Also read: Bumpy road to power: Nitin Gadkari's hints show his aim, but it's bad timing for the BJP