The Misdeeds of Decades: Why BJP and we face a full-blown jihad in the Kashmir Valley today

Omar Abdullah wants J&K to be turned back to pre-1953 status. Mehbooba Mufti is openly daring a billion-plus people. None of this is a coincidence.

Omar Abdullah wants the constitutional clock in Jammu and Kashmir turned back to pre-1953 status.

To be fair to him, it isn’t just his election-time rhetoric. He's been at it for some time now.

Likewise, Mehbooba Mufti too has been saying, like a stuck CD, that if Articles 370 and 35A are fiddled with, the Indian tricolour will not find a taker in Kashmir. While the content of their rhetoric has almost turned stale, what is new is their stridence — this new-found stridence looks like an ominously desperate attempt at raising the political temperature in the Valley to gain some traction, which has plummeted for both of them to an all-time low. Also, even though both Omar and Mehbooba are competing with each other, their mutual rivalry is dwarfed by their combined hostility towards Narendra Modi and the BJP. To dismiss it as their usual competitive fulmination (targeting the BJP/RSS to mobilise the BJP-sceptic Muslim-votes) will amount to misreading a significant development — with huge potential.

Both are ‘legacy’ politicians. Both have been the chief minister. And, presumably, both aspire to regain that office at the first available opportunity. Between them, they can claim to represent most of the voters in the Valley. In the rest of the state too, thanks to a sustained demographic engineering over the decades and their thinly disguised communal politics, their votes may not be an insignificant few. But, it is owing to blatant gerrymandering that the Valley has become all-powerful and, therefore, also their preferred mainstay.

To implement their bipartisan demographic agenda and to succeed at communal gerrymandering, besides a host of other sinister goals, power politics in the state has had to have some semblance of political arrangement with those who ran the central government. Initially, such arrangements rested, largely, on owing an allegiance such as the one Jawaharlal Nehru enjoyed from Sheikh Abdullah till 1953, and later from Bakshi and Sadiq. 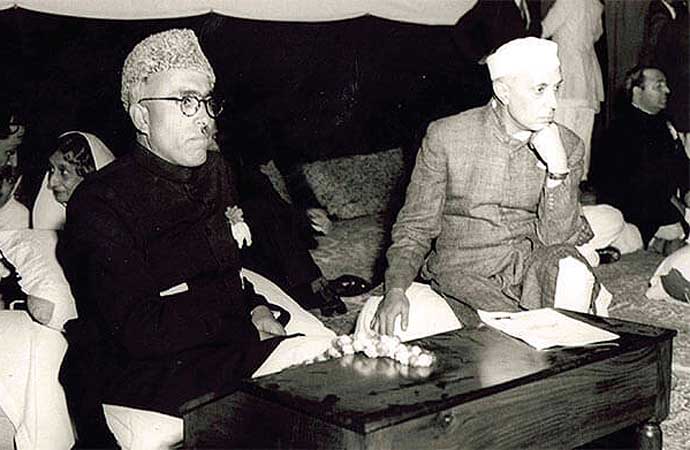 Subsequent examples of such allegiance are from the 1970s, when Sheikh Abdullah promised it to Indira Gandhi or for that matter, in the 1980s, when Farooq Abdullah offered it to Rajiv Gandhi. Whenever such allegiances broke up, due to vaulting ambition, political agendas, waning trust or even mere whim, serious consequences followed.

Later, as the polity fragmented and a single-party legislative majority became difficult to come by, feudalistic allegiances made way for coalitions. NDA-1 had the National Conference (NC). It was followed by a PDP-Congress coalition that extended into UPA-1. Subsequently, an NC-Congress coalition entered UPA-2 and a PDP-BJP coalition became a part of NDA-2 — in less than two decades, almost all possible permutations and combinations have worked together, sharing power and public office. For any other state, this would have been considered maturing of the polity, through the democratic process — not for Jammu and Kashmir.

J&K suffered a veritable misfortune at its very birth into the great family called the Indian Union.

Nehru, the self-appointed midwife, and Sheikh, his ambitious apprentice, had pre-decided that it was going to be a ‘special’ child — very early on, crutches like Articles 370 and 35A were declared to be essential armours and strapped onto its fragile limbs. Haunted by its own 'special status' — Articles 370 and 35A have become the greatest thorns in J&K's growth. (Source: Reuters)

Despite loud proclamations about rejecting the two-nation theory and building the Union of India into a secular democratic constitutional republic, J&K-specific exceptions and modifications were forged. The reason — irrespective of all the alibis offered from time to time — was its Muslim-majority demography. Our Constitution — arguably the most liberal one in the whole world— was not extended to the state of J&K as a concession to its Islamic identity. Earlier, our Parliament, India’s highest sovereign body, was denied jurisdiction over the territory of J&K — a mere province in our Union — just because it had a Muslim majority population. A separate Constitution for J&K — which was regressive and majoritarian, with no fundamental rights or minority protection — was allowed to supersede the collective will of a secular India.

Ironically, it looked as if another Pakistan was sought to be built now, within our own territory, and that too in the immediate aftermath of a bloody partition.

In the Congress leadership’s tentative and apologetic approach towards the state of J&K, Pakistan sensed an opportunity.

Over the next seven decades, Pakistan continuously invested in a constituency within India that questioned J&K’s accession to India. Pakistan flourished in our campuses, within our media, bureaucracy, judiciary, economy, popular entertainment and, of course, among the so-called mainstream politicians of Kashmir.

Our response was to placate.

We ceded territory, eroded our own authority, legitimised politics based on sub-national identity, patronised separatist leadership, paid hefty ransoms to secessionists, allowed Hindu genocide and did everything else that put a premium on challenging India’s sovereignty and discounting patriotism. Often, our polity would let the most patently anomalous conduct pass as legit.

The net result of it all is that today, jihad has taken control, of the street as well as the narrative, in the Valley.

That it faces an equally serious backlash in Jammu and Ladakh is another matter, but even that is no thanks to the Indian state. 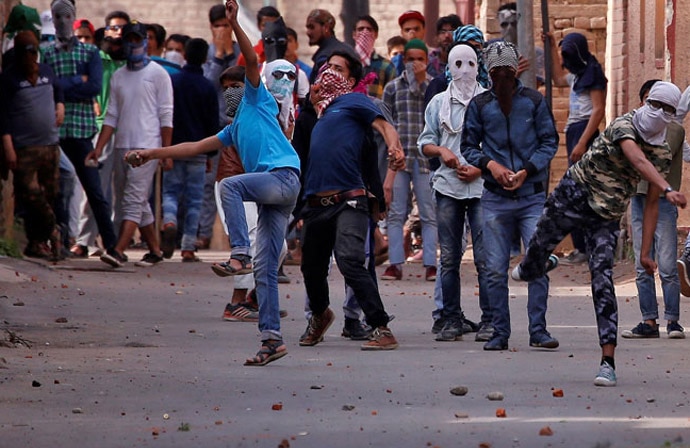 Jihad has taken control over the streets and the narrative of Jammu and Kashmir today. (Source: Reuters)

While the Indian state was indulging the politicians from the Valley, the Jana Sangh, and later, the BJP, since their very inception, opposed such decisions by dubbing these 'appeasement politics'. Their founder, Dr Shyama Prasad Mookherjee, led a movement to oppose provisions such as Articles 370 and 35A. To their credit, they mobilised public opinion throughout the country on these issues. Since they were politically insignificant, they could never intervene and reverse the drift in Jammu and Kashmir. But even when they could, the political will seemed to lack. Meanwhile, whenever the NC and PDP associated with the BJP, they always did so with explicit caveats, safeguarding the Muslim interests in J&K.

Today, much has changed.

The BJP, ruling the Centre and almost a score-odd states, has become the most powerful political force in India.

It has achieved this feat a bit too fast for its rivals’ comfort. Its opponents are facing a veritable crisis of existence. A clear fallout is that politics, at the national level, seems to have sharply polarised — at the same time, in the Kashmir Valley, the fledgling jihad of the earlier decades has gained a critical mass.

After 40 months of a disastrous collaboration with the PDP, the BJP seems to find it difficult to sidestep the full-blown jihad staring at it in the face. It knows now that it stands to lose too much all over the country for its follies in the J&K. BJP’s own core constituency, and the rivals even more so, never lose an opportunity to remind them of the very prescriptions vis-à-vis J&K that they had peddled during their years in the Opposition. A widely shared belief that we, as a nation, have reached an inflection point is adding to the tension — Pakistan too, it seems, feels that it is now or never. It may also feel that its investments over the decades are now on the verge of paying off.

Everything seems to be converging synchronously. 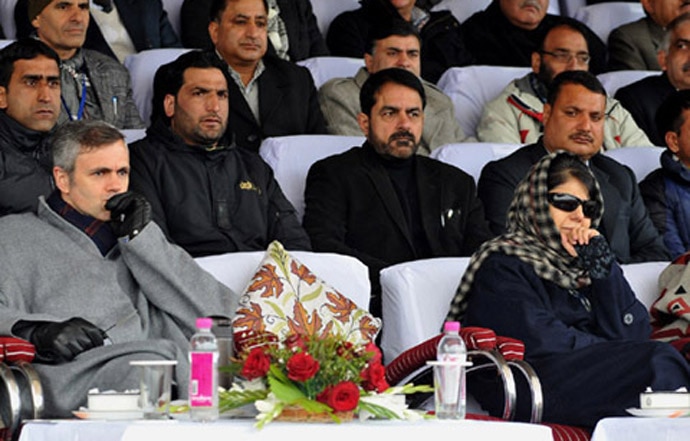 In light of all this, the 2019 Lok Sabha polls are going to decide a lot more than just who will be the next Prime Minister. Everybody with a stake in the outcome is busy picking a side. In the middle of this, when Omar wants pre-1953 status, it isn’t because he fancies himself as the next Prime Minister of Kashmir — he is dog-whistling to his followers, to do what Farooq Abdullah told them to on April 5, 2017, from Hazratbal mosque, in Kashmiri. Back then, he had reportedly told the Hurriyat, “We are not your enemies but friends.”

And when Mehbooba speaks for Imran Khan in the wake of Pulwama, denounces the ban on JKLF/Jamaat-e-Islami, asks for ‘self-rule’ (that reportedly includes Pakistan’s currency to be valid in J&K, shared sovereignty, open borders, Sharia) and threatens to secede on 35A, she isn’t trying to merely win a Lok Sabha poll from Anantnag — which, incidentally, she calls Islamabad.

She is openly daring a billion-plus people by poking us in the eye.

But, with its manifesto, it is the Congress that outdoes both in pleasing Pakistan — the fountainhead of jihad against India. And both the NC and the PDP, in gratitude, step aside for the Congress to help it defeat the BJP in Jammu and Udhampur.

It is this convergence of the PDP, the NC and the Congress, under the benign gaze of Pakistan, that is emerging as the leitmotif of the 2019 polls.

Also read: Shehla Rashid: 'Why paint every Kashmiri as a terrorist? Even separatists like JKLF advocate a Gandhian approach, Yasin Malik advocates a peaceful resolution'

#Jihad, #Mehbooba Mufti, #Omar Abdullah, #2019 Lok Sabha elections
The views and opinions expressed in this article are those of the authors and do not necessarily reflect the official policy or position of DailyO.in or the India Today Group. The writers are solely responsible for any claims arising out of the contents of this article.

Student of Media and Politics, makes a living by managing communication for brands and issues, interested in and active among Kashmiris expelled from Kashmir.