To immense applause from almost every quarter have the Memorandums of Understanding (MoUs) been signed between the newfound friends India and Israel, with great energy and enthusiasm from the respective prime ministers, Narendra Modi and Benjamin Netanyahu. The chemistry and bonhomie have already become legendary, and among the most talked about MoUs has been the “big data” deal, involving cooperation and sharing of data in the fields of cyber security, energy and agriculture.

Involving a clutch of MoUs cutting across sectors, such as cyberspace, energy, agricultural technology, Internet of Things and Internet of Energy, the big data deal has been pegged as “boosting measures... to revolutionise Indian farm production”.

While the MoU between the respective ministries of petroleum and natural gas/energy cooperation states that it’s about “looking to explore opportunities of long-term cooperative relationship and joint economic projects to enhance bilateral engagements in the field of Oil and Gas, inter-alia including collaboration in upstream sector activities; R&D and Technology; promoting institutional linkages between Universities and R&D establishment for mutually beneficial collaboration; and in the area of Start-ups”. 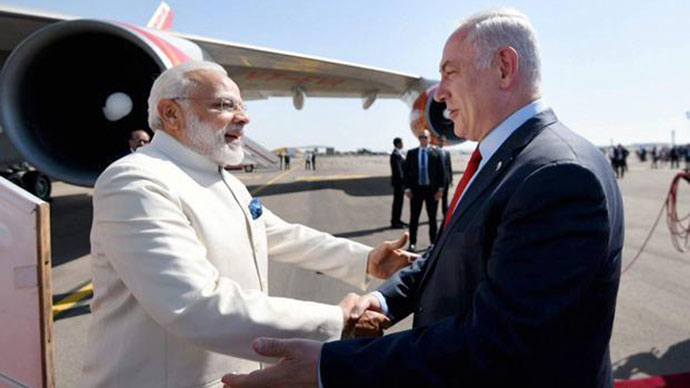 Another related MoU has been signed between Invest India and Invest in Isarel – respective platforms – with the purpose of “supporting and developing cooperation between the two sides through exchange of information on investment opportunities, relevant laws and regulations, policies and government initiatives”.

Keeping these three MoUs in mind, it’s important to look at another related news which claims that Mukesh Ambani-led Reliance Industries Limited (RIL) is set to sign up with Israel’s mPrest, a “big data and smart city tech provider”, which is an important business delegate of visiting PM Benjamin Netanyahu’s official retinue. Reported by a number of websites, the then imminent deal was about RIL’s “move to get deep into the smart city, big data, defence and critical infrastructure space”.

It’s important to read these two news items together to arrive at, if not a set of conclusions, certainly a set of pressing questions. Given the critical big data deal between Israel and India comes at a time when extremely sensitive matters of the very constitutionality of such mass-scale data scooping, collation and storage without the citizens’ informed consent, and/or any informed opinion on the technologically nebulous issues, are being heard in the top court of India, how are we to read this inter-governmental agreement, if not as an instance of technology-driven impatience of both governments and corporate behemoths?

Interesting that in these days of #Aadhar debate, Israel to get access to 'big data' from India. https://t.co/5Il9qehw2p

"Big data" from India was brought up by Israel to influence individual farmer's efforts, yield, water use. India's agriculture ministry to discuss 'big data' use with Israel soon: Secretary Gokhale. He declined to comment on 'safeguards' issue. @MEAIndia @the_hindu

As reported in The Hindu, apparently, the data-driven methods are being shared and accessed to “fight cybercrimes”, and the request for access to big data was from the Israeli side in the context of “how technology can now be used to agglomerate vast amounts of information and then bear on individual field and individual farmer’s efforts, improve the yield”.

It’s interesting that in a country in which the majority of “individual farmers” are either landless or with very small landing holdings, with virtually no access to digital tech or data thereof, even as they are being forced to obtain the biometrics-based Aadhaar card and then link it to other nodes of information/identity proofs, the peg on which the “big data deal” has been hung is agricultural technology via data analytics.

In fact, Union minister of agriculture Radhamohan Singh “participated” in the delegation-level talks on agriculture collaboration using India’s population big database. Moreover, to questions of “safeguards in place to share Aadhaar-based data with Israel”, there were no clear answers, other than stating basis aspects of an agriculture-centric programme. While the digital push to augment agriculture might be commendable in theory, there have been reported instances of farmers in Gujarat denied a very tangible, essential, non-digital ingredient necessary for agriculture – the waters of Narmada River.

Even as the Sardar Sarovar Dam has been inaugurated by Prime Minister Narendra Modi with great fanfare, the diversion of Narmada waters to “canals” and not farmlands, is becoming a huge bone of contention among the farmers of Gujarat and Maharashtra. Even Hardik Patel, the young Patidar leader who campaigned against BJP in Gujarat has tweeted his reaction to the agriculture-centric MoU between India and Israel based on the grievance on the ground.

Given that the priorities of the government aren't exactly in perfect order when it comes to agriculture, with massive debt, rainfall lapses, crop failures and other endemic issues haunting tens of thousands of farmers, exactly how will a deal involving sharing of big data between governments and corporate behemoths - integrating the diverse investments in energy and telecom, while spreading its wings in emerging fields of data analytics and critical-monitoring systems - actually help the farmer in whose name the MoU has been signed?

What about data security?

Which brings us to the next question: what about data security and privacy? What is the exact nature of the data that will be shared, and what all safeguards are being put into place? How is it that another country, Israel, is given access to India’s centralised databases, whose existence is under the scanner, and whose legality is being debated in the Supreme Court of India, as we speak?

There have been a number of reports alleging surveillance by foreign agencies – whether foreign government-driven or private and commercial, but big enough to influence policies transnationally, and the Aadhaar database –  as has been repeatedly proven –  is a security and privacy nightmare. In this context, it is important to ask if the inter-governmental MoU between India and Israel is at odds with the fundamental Right to Privacy of the individual farmer at whose behest the big data is being collected, shared with another country? All this at a time when a giant corporate entity from India, with extensive interests in oil and natural gas, telecom, etc is looking to not just integrate these two diverse fields, but also control the mechanisms of monitoring via data analytics of lakhs of Indians.

Rights in the age of big data

As internet and privacy rights activists have asked, what does it mean to have “rights in the age of big data”? One of the fundamental premises is we must safeguard people, citizens, individuals, over innovations in technology that erode privacy, individuality, autonomy – informational and bodily. Aadhaar-based authentication and databases have proven to be structurally invasive and exclusionary, which means any technology based on, or dependent on, such a loophole-ridden system is problematic to the very core, at odds with India’s billion-plus citizens, who should not be treated as mere sources of data and be rigged for the “new oil”.

In fact, Biju Janata Dal MP Tathagata Satpathy has argued on exactly this line, saying a line of argument that treats data as the new oil should compensate citizens for sharing their data, not otherwise. Instead, if citizens are being harnessed and farmed for data, as it were, by governments, technology giants and corporate behemoths alike, then we have created a system that’s extremely problematic, to say the least.

Also read - 'Not anti-national, but anti-Modi': What prominent voices from south India said on free speech