Farm Bills: How AAP has been championing the cause of farmers

AAP has stood with the farmers’ cause since it came to power in Delhi. In the days to come, the party will strategise to contribute more critically to the injustice against peasants.

The fate of farmers and agriculture has been decided numerous times beginning from the conjuncture of end of British colonialism and Independence in 1947. Planning in the post-independence period was a societal response to the historic rejoinder of colonial exploitation and a long feudal past. This trajectory underwent a paradigmatic change with liberalisation in the 1990s with no visible favourable impact on the agricultural sector. Over the years, the Indian peasantry has mobilised collective action directed against the state and has claimed changes in agricultural policy and practice. The rallying point of the farmers movement has usually been centred on the transformation of the agrarian structure and redressal of specific grievances against policy frameworks introduced by the state.

There is a trend of an overall decline in India’s agriculture economy. Half of India’s population works on farms but farming constitutes only 15 per cent of the country’s GDP. Agricultural income is swiftly declining and the rural economy is progressively pauperising. A modest estimate shows that about three lakh farmers have committed suicide since 1995. The discontentment among farmers has arisen because of this agrarian crisis that is structurally rooted in the political economy of the state. The precarious pulse of the economy can be felt if one remembers the episode where drought-hit farmers from southern Tamil Nadu brandished human skulls and held live mice in their mouths to draw attention to the crisis. 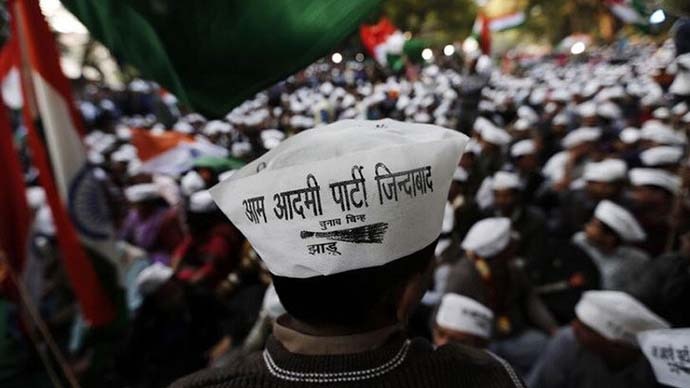 AAP has extended full support to the farmer’s strike on September 25, 2020, against the farm bills passed in the Parliament. (Representative photo: Reuters)

History stands testimony to the fact that economic transformation in any developing nation is driven by substantive increases in agricultural incomes reinforcing industrial growth. In the present context, the farmers of Haryana and Punjab are protesting and expressing their resistance to the three Farm Bills — Farmers Produce Trade and Commerce (Promotion and Facilitation) Ordinance 2020, The Farmers (Empowerment and Protection) Agreement on Price Assurance and Farm Services Ordinance 2020, and The Essential Commodities (Amendment) Ordinance, 2020. The farmers' organisations are wary about the inauguration of new trade areas without appropriate government regulatory control and price intelligence regime that abdicates the responsibility of the state.

The public outrage has largely been because of the hurried manner in which the Bills were passed via voice vote while refusing to respect the opposition’s demand for division on the issue in the Rajya Sabha. The pandemonium that followed in the Upper House led to the suspension of eight MPs from different opposition parties and their subsequent sit-in dharna in the Parliament.

This rare occasion of formidable contestation over the Bills is spearheaded by AAP. There is widespread alleged distrust in the Centre’s claim that the Farm Bill will catalyse prosperity among farmers. The adverse impact of the Ordinances on the livelihood of farmers has created a conflicting public opinion about it. AAP’s response has been spontaneous and strategic in challenging the capitalist tendency and class differentiation propelled by the Ordinances. MP Sanjay Singh has been voicing the farmers' demands in the public domain to consolidate a political opportunity electorally and provide leadership to an otherwise fragmented Opposition.

Largely, AAP has stood with the farmers’ cause since it came to power under the leadership of CM Arvind Kejriwal in Delhi. What is AAP’s stake in the politics of agrarian development? The Delhi governance model has been considerably inclusive when it comes to the peasant’s question. Delhi has a total cropped area of approx. 34,750 hectares with agriculture being practised in the periphery of the city space. There is a consensus in AAP to augment farmer’s real income over the long term through investment in productivity.

Three prominent policy interventions launched by CM Kejriwal showcases that the Delhi government addresses the growing disparities and vulnerabilities in the agricultural sector. As early as 2015, CM Kejriwal launched a compensation policy for crop loss. It provided Rs 50,000 per hectare or Rs 20,000 per acre of damaged crops due to weather fall out.

The Mukhyamantri Kisan Aay Badhotri Solar Yojna is yet another ambitious project integral to the green budget passed in 2018. It is a farm solar power scheme to augment the real income through additional increase in the income of the farmers by three to five times. A maximum of one-third surface area of agriculture land to be used for the installation of solar panels so that agricultural activity is not hampered. While it requires zero investment from the farmers, the Delhi government takes on the responsibility to negotiate with private companies interested in electricity generation from the project.

The third and most important scheme is Mukhyamantri Kisan Mitra Yojna which echoes the spirit of the recommendations of the Swaminathan Committee Report. Remunerative prices for agricultural produce has been on the constructive agenda of AAP. CM Kejriwal has walked the extra mile to provide 50 per cent more amount than specified minimum support price of crops to farmers. There is provision for direct money transfer for the unmediated benefit to farmers. It is a conscious move to rectify the erratic and spurious fixation of minimum support price.

In the background of Delhi’s agriculture model, AAP has found a foothold in the burgeoning peasant protests in Punjab and Haryana. The party's mandate as Opposition with 20 seats in Punjab has given it a locus standi to articulate the demands of the peasants more vigorously in the Parliament. Punjab and Haryana are the frontal states to be affected by the Ordinances. Historically, Punjab has played a significant role to buttress India’s agricultural production and food security. It is the vanguard of India’s granary. The fear and suspicion is that the corporatisation of agriculture will bolster its downturn. The resignation of Akali Dal MP Harsimrat Kaur Badal from the alliance with BJP affirms the “anti-farmer” tenor of the legislation as anticipated by the opposition parties.

AAP has extended full support to the farmer’s strike on September 25, 2020, against the Farm Bills passed in the Parliament. Volunteers of the party will form human chains across Punjab to register their protest and mobilise public opinion on it. It is only expected that in the days to come, the party will strategise to contribute more critically to the injustices against peasants. A more pro-active stance on the matter will embolden its presence nationally. Its camaraderie with the peasant movement will once again remind the world how extraordinarily AAP emerged as a reckoning force from the womb of another movement — the movement against corruption.

#Arvind Kejriwal, #Aam Aadmi Party, #Farmers' protest, #Farmbills
The views and opinions expressed in this article are those of the authors and do not necessarily reflect the official policy or position of DailyO.in or the India Today Group. The writers are solely responsible for any claims arising out of the contents of this article.