In fact, Indians don’t have freedom of expression. They have a privilege.

We live in a free country, run by democratic governments, governed by the Constitution of India that guarantees fundamental rights, starting with the right to freedom of expression, the mother of all rights. If you take out that one fundamental right, other rights are meaningless. 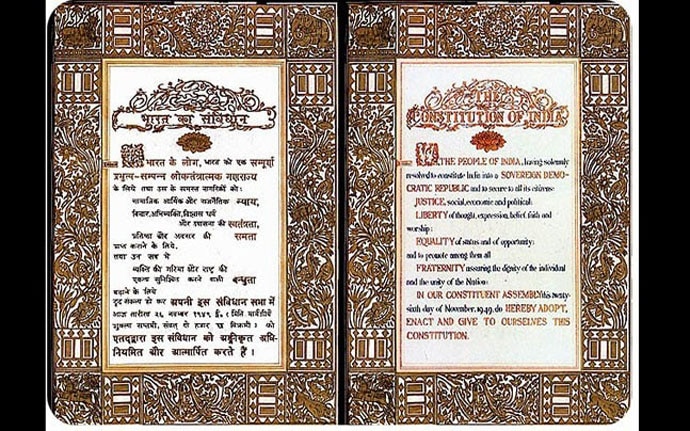 We are told this is the only book we should live by — but is that a fundamental truth? (Photo: India Today)

The Constitution, we are told, is the only book we should live by. A living document that can be amended based on needs. By politicians, sometimes to suit their own needs, even if it goes against the spirit of the Constitution. As has happened in many recent cases. Under pressure from one group or the other, driven by political expediency.

When the United States of America amended its Constitution for the first time, they removed bits that could come in the way of freedom of expression. That America is great is not only because its roads are great, but the road to America’s greatness was paved with this fundamental right that couldn’t be curtailed. Today, Americans are squirming as the Donald tries to fiddle with the possibility of censoring free speech. He’s got his eye on America’s most fundamental right. (Photo: AP/file)

The first amendment to the Indian Constitution was also about freedom of speech. Prime Minister Jawaharlal Nehru did not like Leftist Romesh Thapar’s magazine, Cross Roads, writing about his policies. This got our own first amendment.

It did just the opposite of what Americans did in their first amendment — our First puts restrictions on the freedom of expression. Pandit Nehru was great. But not great enough to not amend our basic right. (Photo courtesy: India Today)

They called it “reasonable restrictions”, but it was reasonable only in parts. Our leaders inserted a vagueness that could be used to deny what is fundamentally inalienable: The sub-clause a of clause 1 of Article 19 of the Constitution of India. Read this:

“Nothing in sub-clause (a) of clause (1) shall affect the operation of any existing law, or prevent the State from making any law, in so far as such law imposes reasonable restrictions on the exercise of the right conferred by the said sub-clause in the interests of the sovereignty and integrity of India, the security of the State, friendly relations with foreign States, public order, decency or morality, or in relation to contempt of court, defamation or incitement to an offence.”

All dandy and reasonable, except the words 'decency' and 'morality'.

Who defines what is decent and moral?

Well, the one with the lathi gets the water buffalo. Hindi proverbs aside, what was 'decent' and 'moral' at one point of time or a place is indecent and immoral at another.

This is what brings us to Abhijit Iyer-Mitra.

Iyer-Mitra sarcastically pointed at the sexually explicit imagery carved on the temples at the Konark complex. Something that was clearly within the realm of decency and morality is no longer the same today. They remain on the walls of the temples and the decency and morality brigade cannot do anything about it because, temple, gotcha! Devout Hindus can’t un-see the sex, but devout Hindus don’t demolish temples either. Abhijit made a joke. He didn’t know the joke would end, cruelly, on him. (Photo: Twitter)

Abhijit Iyer-Mitra does not hate Odias or Odisha or Odia food. Just because he found something funny enough to say doesn’t mean he believes in that. His politics is wonky at times, and that is not found funny by many. But every man, leaning left or right, has to have some sense of humour to get through the day.

Those intemperate Twitter funnies, however, cost him freedom. He has just been granted bail after a month in jail. We all saw in horror how an inconsiderate judge, a hartal in local courts and, above all, an unfavourable political dispensation put the ‘mental’ in fundamental and rights began sounding all wrong. Law took its own course. Pun was rid of fun.

George Carlin once said, if it can be taken away, it’s not a right. It’s a privilege. The very fundamental rights that we think will protect us from the vagaries of the law keepers are actually privileges that the law makers have bestowed upon us. At any given moment, they can be taken away by a fickle system that does not value them as being fundamental.

Every other day, we have news about individuals being arrested for Facebook posts critical of a CM or the PM, gods and prophets of yore and today. We read them and move on. As individuals, we treat them as individual cases, not of any national consequence. Individual rights have got short shrift in our scheme of things, obsessed about group rights. When the Jats agitated: The mob is always right. Even when it’s totally wrong. (Photo: PTI)

A mob of fifty people can block a road and force the administration to give in. A bunch of people can claim to be rallying for a group’s rights and ministers would come down to appease them. Some caste group, some religion group, minority, majority, this, that, any. The government is ready to bend over backwards to uphold group rights.

Abhijit Iyer-Mitra’s fundamental rights were trampled upon because a group’s sentiments prevailed upon an individual’s rights.

He was released on bail after the state government decided not to pursue the cases against him. This case was not going anywhere. This was just a ploy to punish him, not judicially but by judicial process. He HAS been punished before the trial even began. A month in incarceration — for a joke. It would have been funny, had it not been for a joke.

An individual is the smallest minority, irrespective of her caste, religion, group allegiance. The nation is made of this minority. Until we put individual rights over group rights, we are doomed and destined for mob rule. People who rue rising majoritarianism must learn to stop batting for groups and make individual fundamental rights fundamental again.

Else, Article 19 will be a joke and the ruling class will have the last laugh.

Also read: Abhijit Iyer Mitra’s bail rejected: Are the feelings of religious people more important than the rights of the non-religious?