They are insulting and abusing the whole freedom struggle of the nation.

One could not have imagined this happening in India. What ABVP did on March 18 at Delhi University's (DU) main gate is something even the British could not do. Even the British colonial regime could not disturb or disrupt either Bhagat Singh's own meetings under the banner of Naujwan Bharat Sabha, or meetings held in his favour during his jail term and execution.

Ahwan, a student group organised a meeting on "The life and Writings of Bhagat Singh" to mark his martyrdom day which falls on March 23, but due to vacations ahead, they held it on March 18 by inviting Professor Chaman Lal, a retired JNU professor, who has written many books on the martyr. 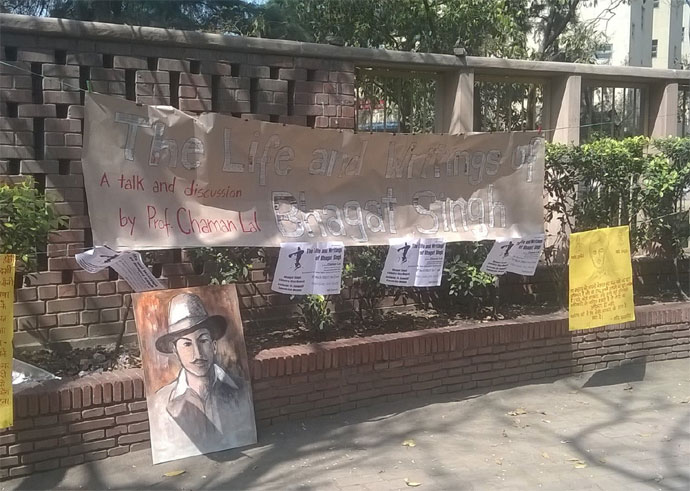 The speaker reached the venue at the DU gate. Since the students were denied any place in the university even for lecture on Bhagat Singh, they were forced to move out. The students informed the area police, which was present in good numbers - at one time outnumbering the students.

Around the same time at an adjoining location, a drama group were staging a play on "The true happenings in JNU." The team had just four-five actors. Within five minutes of starting the play, a mob of 10-15 young boys and girls encircled the area and started resorting to violence and threatening the actors with attacks. They were shouting "Bharat Mata ki Jai" and "Vande Mataram" slogans, calling the actors as "Deshdrohis" to be thrown out of India.

The police tried to separate the two groups. As Ahwan group chairman Dr Vikas Gupta invited speaker Prof Chaman Lal to speak, the same ABVP group tried to disrupt the lecture by loudly shouting Bharat Mata ki Jai slogans. The speaker who was holding government of India published writings of Bhagat Singh pleaded with police to ask the disruptors to listen and ask questions later or hold a separate meeting. 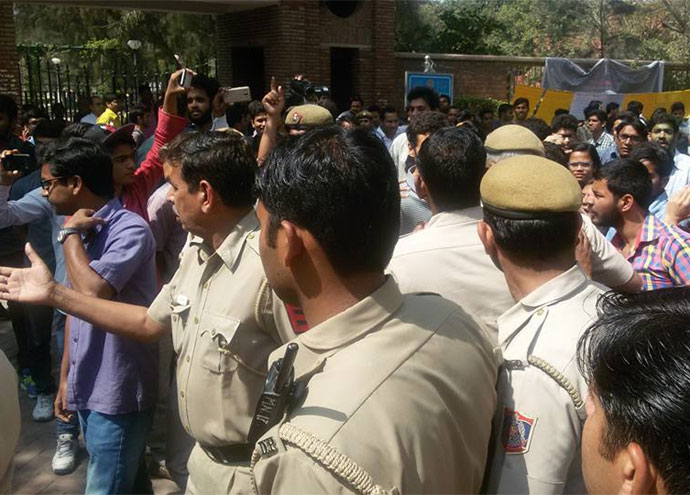 The police tried to persuade the disruptors but they were in no mood to listen and kept shouting.

At one time both the sides were shouting full-throated slogans - the ABVP group with - "Bharat Mata ki Jai Kehna Hoga" and "Vande Matram Kehna Hoga". Ahwan students responded with "Jai Hind" and Bhagat Singh's slogan, "Inquilab Zindabad." The ABVP students were not allowing the speaker to speak on Bhagat Singh's writings on religion, communalism and atheism.

But the speaker had his say and even a question-answer session was held. After the lecture, the ABVP group kept threatening Ahwan students, but the speaker and students could not be cowed down and refused to leave the place under threats.

This was a sad day to see how the supreme patriot and nationalist of the country, Bhagat Singh was treated by phoney and violent nationalists, who had played no role in freedom struggle, but grabbed power by cheating people with false slogans. They are now insulting the whole freedom struggle of the nation, including Gandhi, Nehru, Bose, Ambedkar and Bhagat Singh.

#JNU, #Nationalism, #Bhagat Singh, #ABVP
The views and opinions expressed in this article are those of the authors and do not necessarily reflect the official policy or position of DailyO.in or the India Today Group. The writers are solely responsible for any claims arising out of the contents of this article.