Kabul twin blasts: What the ISIS attacks mean for India, Pakistan and the US

The explosions have shaken the confidence of the huge posse of journalists in Afghanistan as well as the general public.

Afghanistan was rocked by a double suicide bombing in Kabul and a shooting in the eastern Khost province claiming 36 lives. The terror attacks struck during the rush hour on Monday (April 30) in a busy area Shash Darak in capital Kabul.

The modus operandi of the two attacks was unique in the sense that it was well-crafted and executed with great precision carrying ISIS signature. The first suicide attack was carried out by motorcycle-borne perpetrators near the office of the National Directorate of Security (NDS). Subsequently, after 30 minutes, when journalists and medical help were being rushed, a second suicide strike was carried out with immense ferocity killing 10 journalists. 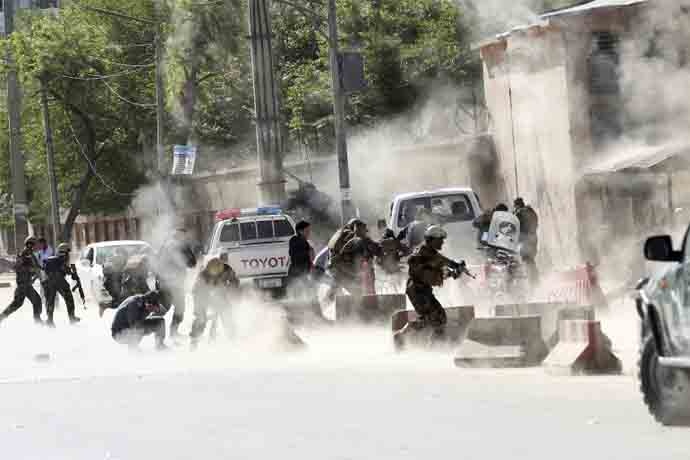 Security forces run from the site of a suicide attack after a second bombing in Kabul, Afghanistan, on April 30. (Credit: AP photo)

The plan was perfect and the terrorists were sure and were in complete readiness to strike when the medical and press coverage team were expected to arrive at the scene of the ghastly incident to ensure that fatalities are more and the publicity maximum.

Reacting immediately to the terror attacks, the Afghan Journalists’ Safety Committee disclosed that the casualties included a photographer, Shah Marai of the AFP, a correspondent of the Radio Free Europe covering the Dari service, a journalist of Al Jazeera, BBC Afghan service head, Najib Sharifi along with other mediapersons. These strikes dealt a severe blow to the media fraternity in Afghanistan.

The explosions have also shaken the confidence of the huge posse of journalists in Afghanistan forever present to cover the political happenings as well as the general public of Kabul who are now reeling under fear and insecurity due to spiralling cases of homegrown terror.

Importantly, these strikes occurring close to the intelligence headquarters, and other crucial government buildings as also near the US embassy are really a cause of serious concern. Afghan security agencies seem clueless as the terror attacks continue to hit Kabul and other parts of Afghanistan at regular intervals. Very recently, six persons died due to car bombings. It’s pertinent to state that on April 22, a deadly suicide attack killed as many as 57 people. Also, in southern Afghanistan, 13 were killed and many injured.

ISIS, which is active in Afghanistan, claimed responsibility for these terror strikes. Now the question is - how does the Afghan authorities tackle this ongoing violence? It needs a political solution as well as tough military action. Political because it’s learnt that the last couple of weeks saw some fragmented groups of Taliban sending overtures to the Afghan establishment for notifying Taliban as a legitimate party to enforce peace.

It’s very likely that diehard and conservative Taliban elements, opposed to the pacifist forces, were behind such attacks so that peace is never on track. Such forces are also considered to be enjoying the backing of the Pakistan intelligence and security services who are opposing tooth and nail not to give peace a chance.

Possibly, Pakistan also wants Afghanistan to wean away from India in the sphere of security and intelligence cooperation so that Pakistan freely pursues its terror agenda. Against this backdrop, it now appears imperative for the US to proactively step in, provide hard human and technological intelligence to the Afghans to pre-empt misadventures of any kind. Or else, terror strikes will be the order of the day with no signs of any cessation of mindless suicide bombings.

Crucially, ISIS has its presence felt loud and clear on the Afghan turf. There is a huge fan following and sympathisers in Afghanistan of the ISIS. Experts assess that afghan fighters, now with ISIS, in and around Syria, may end up returning to Afghanistan finding safe passage through Balkan states and other safe routes. Once they are back in Afghan territory, they will, in all likelihood, add additional muscle power to the Jihadi forces already active in Kabul and its vicinity, spreading the ISIS blueprint.

The US and India need to jointly collaborate to defeat the evil designs through a robust covert operation, which also merits attempts to foil Pakistan's plans to puncture the growing Indo-Afghan friendship.

Also read: Pak-sponsored terror in Afghanistan: Why India has to stay alert

#Kabul, #ISIS, #Terror attack, #Afghanistan
The views and opinions expressed in this article are those of the authors and do not necessarily reflect the official policy or position of DailyO.in or the India Today Group. The writers are solely responsible for any claims arising out of the contents of this article.