The Greater Game: Several powers are interested in controlling Afghanistan. Its future will impact each one of them too

As the US talks with the Taliban, everyone from the Afghan govt to India, China and Pakistan, are watching. What role will each power play in the war-torn country which could be a new breeding ground for ISIS and al-Qaeda?

Which way is Afghanistan progressing? Is it towards peace and stability — or a scenario of 1996 that brings back memories of Najibullah being hung at the end of a rope?

Are the elections going to be held next July or will we have a new accord in place by then and perhaps, more time being given with new contestants (the Taliban) entering the arena and the electoral process.

Is there going to be a semblance of an Afghan-owned, Afghan-led peace process? Will the other stakeholders be a part of the US–Taliban peace process at some stage? There are many more questions that beg answering.

Recently, the Americans and the Taliban met in Doha, Qatar, for a week, in the first successful dialogue between the two parties. Previous attempts at such dialogues had either failed to take off or had broken down in-between. At Doha, the two sides scripted a framework agreement that needs to be fleshed out.

However, in capitals across the world, there is skepticism aplenty. Taliban and the US recently held talks. Who else was present? Not much is known. (Image for representational purposes; Photo: Reuters)

An unscheduled round of talks between the US and the Taliban, due to start in Pakistan on February 18, 2019, could not take off with the insurgent group putting the blame on travel restrictions on team members on account of being blacklisted by the US and UN. This meeting was obviously intended to build on the Doha meet. However, the participants were again to be limited to the US and Taliban — even the regime at Kabul wasn’t intended to be a part of it.

Ex-Afghan President Karzai's comments are relevant, “We don’t want the peace process to become hostage to competing powers for influence in Afghanistan or over the process,” said Karzai. “No. We have suffered because of that and we don’t want that.”

The agreement in Qatar did promise direct dialogue of the elected government at Kabul with the Taliban. However, it’s doubtful whether Taliban representatives at the Doha talks were representing a singular cohesive entity to deal with or its factions will yet pull in different directions.

The other major stakeholders in Afghanistan, beyond Pakistan and the US, include India, China, Russia, Iran and the Central Asian countries that have a large population of their ethnic origin as part of the Afghan populace.

One of the biggest stakeholders is India, Afghanistan’s major development partner and as far as the Afghan populace is concerned — the favoured ally. 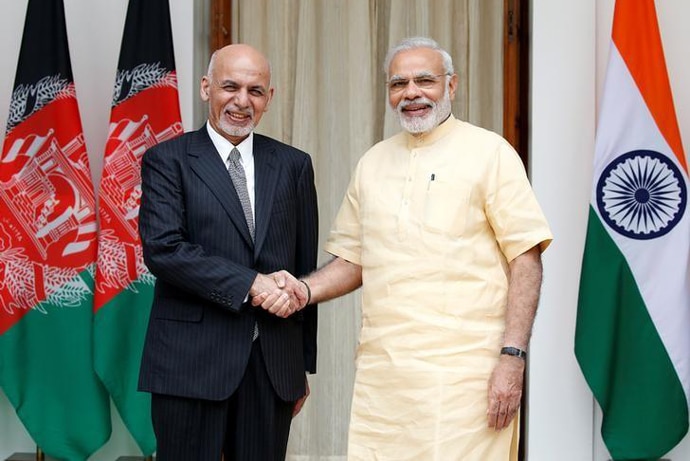 India is playing a key role in the Afghanistan story. Without a civilian Afghan govt, how long will that last? (Photo: Reuters)

Having invested billions in Afghanistan, and almost exclusively on developmental projects, India will want a stable Afghanistan where it continues with its projects and enhances  trade with the country. Another interest that it would share with most stakeholders is Afghans not hosting Al-Qaida or any other foreign terrorist groups. The country remaining stable needs no reiteration.

Russians are, of course, major stakeholders. Beyond the inducement of watching the Americans bite the dust, they have higher stakes. The possibility of instability creeping into Central Asian countries from Afghan-based groups is a threat to them. In 2016, Russia’s special envoy to Afghanistan, Zamir Kabulov, stated that “Taliban interests objectively coincide with ours.”

The Russians and the Taliban both do not want another contender in Afghanistan — like the ISIS or its sub-regional counterpart, the ISKP (Islamic State of Khorasan Province). Beyond the terrorist groups, Russians would also like to quell the drug traffic from Afghanistan.

They also have a plan of extending the China Pakistan Economic Corridor through Afghanistan.

It’s an area that could give the Belt and Road Initiative (BRI) additional fillip and allow exploitation of a market that remains underutilised. The Chinese reach to Central Asian countries is also facilitated thereby.

As far as the Iranians are concerned, they would like to see the Americans quit from their backyard. Iran has a firm relationship with the Taliban and has been providing material and moral support to them. The major reason for common ground remains ISIS — Iran doesn’t want the ISIS, which swears by Sunni beliefs.

Afghanistan’s souring relationship with Pakistan is another reason. Iran has also penetrated the Afghan market substantially. Iranians will be interested in the current Afghan government retaining pre-eminence in any power-sharing agreement between them and the Taliban.

Indian interests in Afghanistan are very substantial. India has been among the top donor countries and has invested hugely in the war-torn state. Indians possibly enjoy the best acceptance by the Afghan populace with most of its developmental projects oriented to benefit the populace. Indians would definitely be interested in retaining their hold and continue to remain a leading participant in Afghan development.

Pakistan’s priority is an acquiescent Kabul — Pakistan has displayed the ability to influence the Taliban quite decisively, so far.

The fact that the Taliban delegation went to Doha for talks with the Americans, and both sides sat across the table for about a week, is evidence enough of it. Now that the Pakistanis have been able to get the Taliban to meet the Americans, even President Trump may be quite convinced of their utility. The Afghan govt wants to retain overall control of the country —  while inducting the Taliban at the peripheries. (Photo: Reuters)

However, to what extent the Taliban will remain submissive to Islamabad after it obtains a foothold in Kabul is anybody’s guess.

If it were to find a way of retaining its fighters either as regulars in the Afghan Army or by resorting to any other model, it will want to be more independent than what the ISI would accept. Pakistan would also want to keep India at bay and remain the domineering power-broker in Kabul.

A stable Afghanistan is not in the Pakistani Army’s interests.

The Afghan government would want to retain overall control of the country — while inducting the Taliban at the peripheries. Holding the next election peacefully and under their rule would be in their interest. Afghanistan remaining a democratic country serves its purpose.

The world at large, and Afghans in particular, would want peace and stability.

The gains Afghanistan had made in terms of reconstruction, infrastructure, human rights and women’s emancipation are issues that concern everyone. Afghanistan not veering again towards being a breeding ground of global terror — or ISIS and Al-Qaida making gains — is something that is important as much for Afghans as for the rest of the world.

The Americans holding talks with the Taliban, without the other stakeholders being present, is a myopic approach to resolving a vexed issue that has defied a solution for decades.

Khalilzad’s own statements indicate his understanding of the issue that the Afghan peace process needs to be essentially Afghan-led and Afghan-owned.

Undoubtedly, the Americans must be keeping most stakeholders informed — but a seat for them at the table is essential to give peace any real chance.

Also read: Post Pulwama: What India can learn from the terrorist attack

Post your comment
#Terrorism, #Pakistan, #China, #Hamid karzai
The views and opinions expressed in this article are those of the authors and do not necessarily reflect the official policy or position of DailyO.in or the India Today Group. The writers are solely responsible for any claims arising out of the contents of this article.