Twin blasts in Kabul: Why terrorists are targeting the fledgling Afghan media

Bomb blasts and terror attacks have become so normal in Kabul that within hours of any such incident, the rest of the city, except the grieving families, continues with its daily chores. Even the international media appears to have long forgotten the Afghan war, and casualties in terrorist attacks have been reduced to mere numbers.

But even by Kabul standards, Monday's twin blasts by purported ISIS terrorists was a bleak reminder that the longest war that the United States had declared after 9/11 to end terrorism is far from over. Only last week, ISIS attacks at voter registration centres in Kabul and Baghlan province had killed at least 63 and injured more than hundred others.

As a blast was heard in the Shash Darak area of the Afghan capital, brave journalists came to cover the event while locals gathered to help the injured, like they always do. A second suicide bomber who was carrying a camera himself to “blend” among the media personnel, according to police, just then detonated his bomb. Afghan security forces at the site of a second blast in Kabul on April 30. (Credit: Reuters photo)

This was clearly the deadliest day in the history of Afghan media since the fall of Taliban. In a clear case of “shooting the messenger”, among 31 dead so far nine were journalists. The list of dead included chief photographer of AFP in Kabul, Shah Marai, three journalists of Radio Liberty, locally known as Radio Azadi - Maharram Durrani, Ebadullah Hananzai and Sabawoon Kakar. TOLO News cameraman Yar Mohammad Tokhi, 1TV journalists Ghazi Rasooli and Nowroz Ali Rajabi, Saleem Talash and Ali Saleemi of Mashal TV were also among the dead. 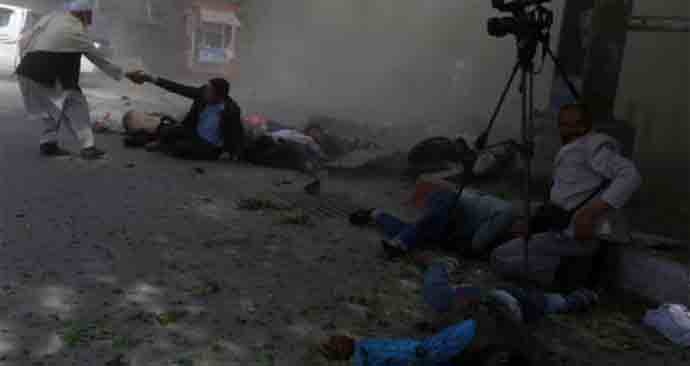 Afghan journalists are seen after a second blast in Kabul on April 30. (Credit: Reuters photo)

At least eight other journalists were injured.  The Islamic State has claimed the Kabul twin attacks, claiming they have killed the “apostates”.

In a separate targeted assassination, BBC Pashto service reporter Ahmad Shah was the 10th journalist killed in the Khost province on the same day.

Ruchi Kumar, one of few foreign journalists still based in Kabul, described the Monday attack as “surreal”. She wrote, “As the death toll continued to rise, it still seemed surreal that so many of our colleagues had paid such a heavy price just for doing their jobs. Even as reports continue to pour in across social media, there were few visuals, if any, of the attacks, because nearly all of Kabul's photojournalists and videographers had either been killed, injured or were in shock.”

On a bloody Monday, 11 more children were killed in a school in Kandahar province when suicide bomber detonated a car targeting a Romanian patrolling troop. Sixteen more people, including five Romanian soldiers, were wounded.

This is not the first time journalists have been targeted in Afghanistan. Another BBC journalist Abdul Manan Arghand was killed in Kandahar last week on his way to work.

In November, last year, Pashto language Shamshad TV was attacked by ISIS terrorists posing as policemen, killing at least one and injuring  20.

In 2016, terrorists stormed the headquarters of TOLO TV, killing at least seven and leaving over 25 wounded.

Besides targeted killing, journalists have also been victims of being at the wrong place at the wrong time. In the famous 2014 Serena Hotel attack, AFP journalist Sardar Ahmad was shot dead along with his wife and two children.

At least 15 media professionals were killed last year in targeted attacks according to Reporters without Borders (RSF).  Earlier, the Afghan Journalists Safety Committee (AJSC) reported 101 incidents of violence (including 13 deaths) against media workers in 2016, up sharply from 73 in 2015.

Television and cinema were considered haram (forbidden) by the reactionary Taliban regime and hence even TV antennas were destroyed. None of the TV or radio channels were allowed to broadcast, except the state-owned Shariat Radio that served as the mouthpiece for the regime. Similar was the fate of the newspapers.

The Northern Alliance-administered North Afghanistan had managed to run Badakhshan Television, broadcasting news and films for around 5,000 viewers for three hours a day.

With the help of foreign aid, the country has seen unmatched growth in the field of information and communication. From almost no electronic media until 2002, today Afghanistan has 110 TV channels and 304 radio stations, according to Afghanistan Telecom Regulatory Authority (ATRA).

During the Taliban period, to make international calls one needed to come to Peshawar, Pakistan. By March 2017, approximately 89 per cent of population came under mobile telephone coverage. Afghanistan today has more than 21.5 million active GSM subscribers.

Afghan entrepreneurs have in fact launched some of the most ambitious and creative projects. In May last year, Zan TV, Afghanistan’s first and only TV station run by and for women, was launched. In the same month, first issue of a Vogue-like lifestyle magazine, for women called Gellara was published.

According to Afghan parliamentarian and chairperson of Women, Civil Society and Human Rights Commission, Fawzia Koofi, “Taliban and Daesh (IS) continue to target our innocent people and civilians. They particularly attack journalists as they think, that way they can attract more attentions.”

She further said that terrorists have “no respect for media and freedom of speech since they reveal their crimes,” adding, “They are against any progress.”

Also read: Pak-sponsored terror in Afghanistan: Why India has to stay alert

#Kabul, #ISIS, #Terror attack, #Afghanistan
The views and opinions expressed in this article are those of the authors and do not necessarily reflect the official policy or position of DailyO.in or the India Today Group. The writers are solely responsible for any claims arising out of the contents of this article.