As a 24x7 news journalist, late nights are an occupational hazard. After almost three decades as a newsman, you think you've seen it all. And yet, when a Rajya Sabha election keeps you on the edge of your studio seat till 2 am in the morning, you ask yourself: are we are a democracy or demo-crazy where even an otherwise relatively straightforward indirect election becomes a T 20 game thriller with a twist and turn at every hour? So, here are the ten things I learnt from the August 8 drama in Gujarat.

A) Rajya Sabha elections are a high stakes poker game. So we always knew there is money power in such elections, that businessmen in particular can 'buy' their way to a Rajya Sabha seat. But somehow we thought that professional politicians were less prone to these money games since ultimately their party 'rewards' them with a Rajya Sabha seat. Gujarat 2017 was different: this is where the transition of politician to warlords was almost complete, an election played out as a 'jung', a full fledged no hold barred campaign being fought by using every instrument of state power. Then, be it the Congress taking its MLAs to a resort in Congress-ruled Karnataka or the BJP reportedly intimidating MLAs in Gujarat with the support of the local police, this was politics being played out as a modern day Kurukshetra. Forget about Rajya Sabha being a House of distinguished elders: a Rajya Sabha election is now a political akhara where the high and mighty test their muscle.

B) Amit Shah and Ahmed Patel are "jaani dushman". Okay, so we knew they were rivals but were they 'enemies' out to finish each other? Shah certainly wanted 'revenge' for what he believes was Patel's role in jailing him in the Sohrabuddin encounter case. There can be no other explanation for the manner in which every effort was made till the last moment to somehow stall the election of Patel even post midnight. This wasn't just political, it was sharply personal, the most bitterly contested election in Rajya Sabha history because the two principal contenders chose to make it about score settling. The fact that almost half the union cabinet reached the doorstep of the Election Commission only confirms how the BJP allowed a Rajya Sabha election to become a prestige battle simply because the Modi-Shah duo wanted to 'teach a lesson' to Patel. 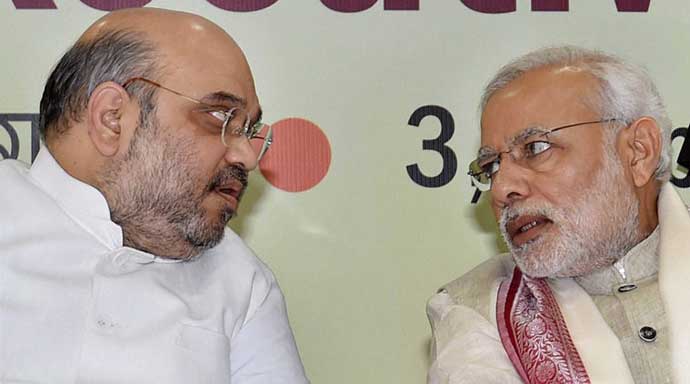 The BJP allowed a Rajya Sabha election to become a prestige battle simply because the Modi-Shah duo wanted to teach Ahmed Patel a lesson. Photo: PTI

C) Ahmed Patel is one of Indian politics ultimate 'survivors'. Ahmed Patel hasn't won a Lok Sabha election since 1989. It is more than likely that he won't win a Lok Sabha election again: a Gujarati Muslim in Hindutva dominated Gujarat is a political oddity. And yet, he is arguably one of the most powerful Congress politicians we have seen in recent times and Sonia Gandhi's political secretary since 2001. Ironically, that might partly explain the Congress's decline in Gujarat and beyond: a party where mass leaders have given way to backroom operators and crisis managers in the byzantine corridors of Lutyens Delhi. His critics may question his limited communication skills and his lack of a mass appeal, but Ahmedbhai, as his friends and critics refer to him, has one great asset: he has, in political parlance, 'obliged' countless people across party lines. On Tuesday night, those IOUs were very handy (the NCP's Praful Patel, for example, returned a favour to a 'friend' by getting him one crucial NCP vote). Like it or not, howsoever unwholesome it may seemto outsiders, 'networking' has its place in Indian politics.

D) Politicians are both consummate liars and ardent loyalists. On Tuesday, we saw shades of both. It isn't easy for anyone, leave aside politicians, to not be tempted by big money. That despite the growing belief that the Congress is a 'sinking ship', 43 MLAs stuck by the Congress is a minor miracle. Yes, they were taken to resorts and kept under 'lock and key', but Tuesday was their freedom day. They could easily defied their party whip, voted with the BJP and been virtually assured of a ticket in the December election later this year. That they chose not to, and many of them come from the poorer Adivasi belt of Gujarat, shows that 'imaan' ('honour') is not entirely lost in politics (and often doesn't have anything to do with income levels since the more wealthy politicians switched). And yet, there were also those who openly 'lied' on camera. The JD U MLA, Chotu Vasava, for example, told us repeatedly 'live' on air that he had voted for Ahmedbhai (the two incidentally both come from the same Bharuch district of Gujarat ). Now, it appears that he actually voted for the BJP. Double crossing is an old political chess move only now it takes place with growing brazenness.

E) The Congress 'existential' crisis is far from over. 24 hours after Ahmed Patel won, the mood in a section of the party is jubilant, as if a comatose patient has been miraculously revived by a victory that, all said and done, was achieved at the very last moment by the call of a third umpire. The fact is, the Congress party is a patient in ICU, and still facing lingering death (or as Jairam Ramesh puts it, the 'Sultanat is over'). What it needs is a complete body replacement, not just the saline drip that a single Rajya Sabha win has provided. Yesterday's election showed that the Congress, especially its old guard, still can fight for self-preservation when pushed to the wall. But where was the fighting spirit and political nous when the party snatched defeat from near-certain government formation in Goa just a few months ago or when it's Bihar alliance was unraveling? Even in Gujarat, the Congress spent months deciding what to do with 'rebel' leader Shankarsinh Vaghela, an indecision that almost cost it dearly. It is interesting also that it wasn't Rahul Gandhi or the gen-next that was leading the charge yesterday but old political warriors like Patel, Ashok Gehlot and P Chidambaram who were at the forefront. Each of them are in the autumn of their careers: they can help the party in crisis situations like yesterday, but hardly lead it into the future. Whether a seemingly distracted Rahul Gandhi is that future leader is an open question and one which the Congress needs to answer soon enough.

F) The Amit Shah-Narendra Modi Jodi is still Indian politics Jodi number one but is not quite invincible as their cheerleaders project. Ever since the UP sweep and more particularly since the Bihar coup, a mood of defeatism has gripped the opposition ranks. One reason why the Congress was so nervous about the Rajya Sabha results was their conviction that the Shah-Modi duo must have some ace up their sleeve that will eventually trump their opponents. When you keep losing election after election, then politics, like sports, becomes a psychological battle as much as a game of numbers. The Congress even after a favourable EC verdict, was petrified that Patel might lose because they had internalised the belief that Shah and Modi can't be bested. Patel's victory, to that limited extent, will convince a section of the opposition atleast that they still have a political future. But for that, they will have to fight for every inch of space 365 days, 24 x 7, not treat politics as a part time flirtation. Conversely, an election defeat, if only in a single Rajya Sabha election, may bring down the hubris levels of those who believe they are modern day Chanakyas and self-styled supremos. Self confidence is a prerequisite for a sharp politics; arrogance is a double edged sword.

G) The Election Commission has a built in autonomy which it will not easily surrender. Yesterday, was a fine day in the office for the EC (if a long one). In the aftermath of the EVM controversy, the EC was facing the heat from the opposition. The fact that the new CEC was principal secretary to the prime minister when he was chief minister Gujarat had led sceptics (including this writer) to conclude that 'independence' of the EC was being compromised. The no-nonsense order of the EC eventually restored faith. Or perhaps we should have been less sceptical in the first place and owe the EC an apology for any harsh comment . While the ruling political class may worryingly continue to erode institutional autonomy, there are enough constitutional checks and balances to safeguard the system. Don't forget the EC is a multi member body and this alone assures some protection from any malignant political influence.

H) Congress may have won the battle for the Rajya Sabha to save its senior MP but is still odds on to lose the war in Gujarat in December this year. This is a state which the party hasn't won since 1995, one where it has neither found the credible leadership nor the powerful narrative to challenge the BJP's hegemony. For a decade, they relied on Shankarsinh Vaghela, a former RSS-BJP man: that chapter ended yesterday. In this period, the Congress haven't built a leadership or offered a positive agenda of change beyond blind anti-Modiism. In post 2002 Gujarat, Hindutva and Hindu nationalism remain attractive magnets for the electorate as does Modi's energetic and charismatic leadership. Challenging the saffron surge frontally will take more than just the jod-tod ki rajneeti of a Rajya Sabha election but will need a clear alternative to the Modi much hyped Gujarat model. The Congress may believe its back in business in Gujarat but when you take your MLAs to the safety of a resort in Karnataka to 'save' a Rajya Sabha seat even as the state's electorate needs to be 'saved' from flood waters, then you do lose the moral high ground to challenge the ruling establishment.

I) Our elected representatives have lost the common touch. Every politician in Gujarat will constantly refer to Mahatma Gandhi in his speeches (ok, maybe the BJP more Sardar than Gandhi) but their politics is often based less on compassion and conscience that was the Mahatma's calling card but more on low cunning and rank commerce. The wheeling and dealing that has marked this Rajya Sabha election is a shame: politics is about winning, but it's also about values. That commitment to value based politics has been further diminished by the events in Gujarat where the allegations of big money changing hands are too serious to be wished away easily. How I wish our netas cutting across party lines would even now travel together to the flood hit districts and offer support to victims!

Post script: I must confess that 24 hours before the election result, I was of the view that Ahmed Patel was likely to lose. Maybe, like many other media persons, I too have bought into the invincibility of the Shah-Modi brand of politics. What I hadn't reckoned, and neither I believe had our netas, that in politics, like cricket, there is always Duckworth-Lewis.

Take away the two disqualified MLAs and Patel would have lost. For now, as they say in politics, 'jo jeeta woh sikandar'!

Also read: What Ahmed Patel's victory means for Congress, a party that had forgotten how to win