BJP forges alliance with AIADMK and PMK: The pros and cons ahead

Tamil Nadu’s murky battlelines became clear with two mega-deals in the same day — a pact between the late J Jayalalithaa’s All India Anna Dravida Munnetra Kazhagam (AIADMK) and the Pattali Makkal Katchi (PMK) in the morning, followed by the ruling Dravidian party’s tie-up with the Bharatiya Janata Party (BJP) by the evening.

The state sends 39 MPs to Parliament — which is crucial as compared to many other states.

The BJP-AIADMK-PMK grand alliance currently holds all the seats in Tamil Nadu — with nearly 55 per cent vote share.

The AIADMK won 37 seats and finished as a runner-up at one place in 2014. The BJP contested nine seats, won one and bagged three in the second position. After the alliance with the AIADMK, the BJP is likely to emerge as the biggest gainer in the regional alliance in the upcoming elections. This is because any seat the saffron party wins will be due to the ruling party in the state.

The AIADMK’s strength lies in the southern and the western parts of the state — dominant with Gounder and Thevar communities — whereas the PMK, led by S Ramadoss, has a strong base in the Vanniyar community-dominated belt of northern Tamil Nadu. The BJP believes that this grand alliance would make it a formidable front in the northern and western districts, as the Gounder and Vanniyar communities form the majority in these areas.

Chief Minister E Palaniswami is from the Gounder community. 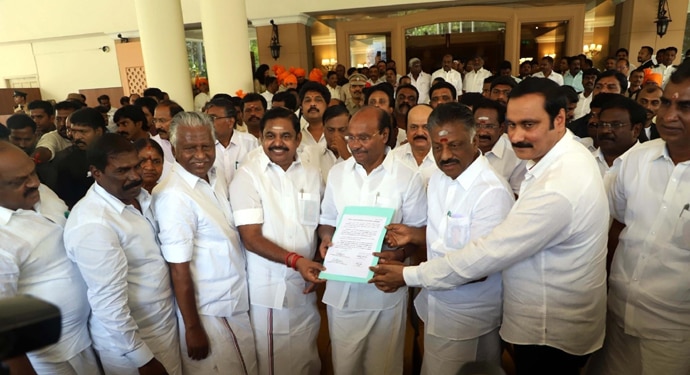 The PMK is always known to add weight to the alliance it joins. Even though the party fared poorly in the last election, its vote share (4.5 per cent) is intact. It’s only due to its vote share that the bargaining power of the PMK has increased. Besides its bastion in northern Tamil Nadu, the PMK will help the AIADMK secure seats in the pockets of western Tamil Nadu — dominant with Vanniyar community — including Dharmapuri and Tiruvannamalai.

Both the DMK and AIADMK had been wooing PMK in the last one month.

In 2014, the BJP formed an alliance with parties such as the PMK, MDMK and DMDK. The BJP and the PMK won one seat each. Since then, the BJP has been aggressively trying to gain a foothold in the southern state.

With the death of Jayalalithaa in 2016, the ruling AIADMK went through political upheavals. However, the AIADMK’s real strength is not known with the absence of Jayalalithaa and the emergence of Sasikala’s nephew TTV Dhinakaran. The Amma Makkal Munnetra Kazhagam led by Dhinakaran is also trying to form an alliance. 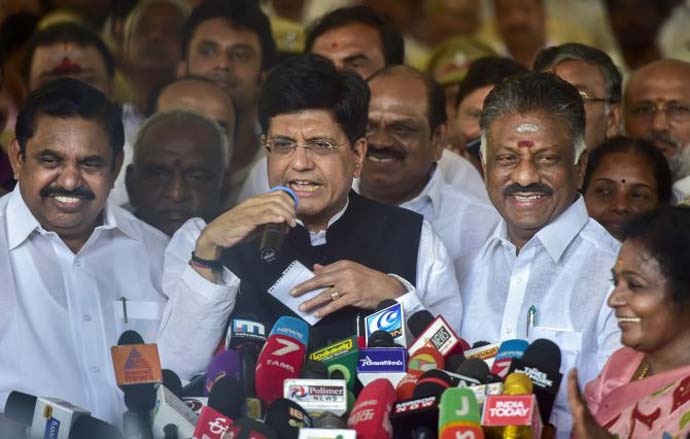 The AIADMK and the BJP formalised their 'mega alliance' in Tamil Nadufor the Lok Sabha polls. (Photo: PTI)

According to political experts, there are some hurdles which might come in the way of the AIADMK-BJP-PMK grand alliance. There is palpable anger in the state against the national party, due to which it will be difficult for the AIADMK to convince the electorate. 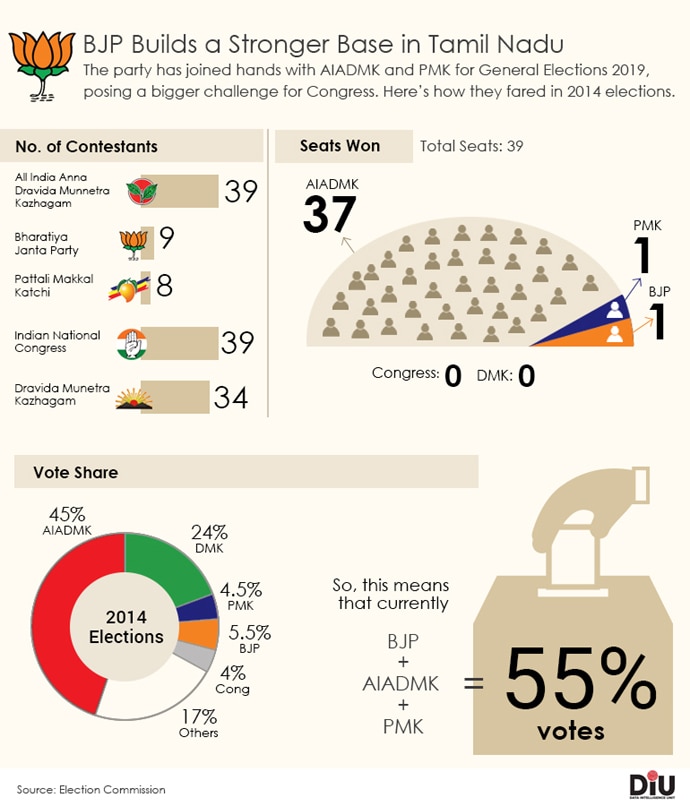 The AIADMK, on the other hand, is battling an anti-incumbency wave. Political observers say the alliance is detrimental as it is happening without choice.

In 2014, the Congress failed to win any seat — and its ally DMK also stood at nil. However, the DMK held the second position on 27 seats with almost 24 per cent vote share as the only hope for the UPA. The data shows of the 39 Lok Sabha seats, the Congress-DMK seems to compete for 28 seats only.

The DMK and the Congress on Wednesday signed the seat-sharing agreement — the Congress will contest nine seats in Tamil Nadu. 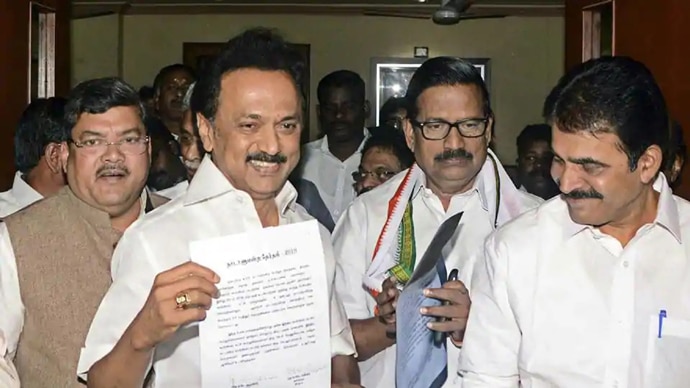 For the BJP, it’s not going to be an easy ride as it will need much more than the AIADMK-PMK-DMDK combine to make an impact in the state.

Despite Tamil Nadu’s political vacuum, the BJP finds it hard to shed its image of an “outsider”.

Also read: Snatching Lok Sabha Victory: Here’s how the BJP can manage the magic figure of 272