Endgame AIADMK, but is the match over?

As the AIADMK game of political chess moves into its final game, O Panneerselvam, the man who everyone thought will emerge as king in February prepares to shake hands with the rival king Edappadi Palaniswami. After six months in the political wilderness, OPS is ready to disband his rebel unit and return home, on Palaniswami's terms. And what did EPS do to woo his former colleague back into the fold? He agreed to convert Jayalalithaa's Poes Garden residence into a memorial, order a judicial probe into Jayalalithaa's death and declared TTV Dhinakaran's appointment null and void.

On the face of it, OPS may seem like a winner and that he managed to get EPS to agree to these three demands but peer closer and you will realise the man with the wide grin is actually EPS. For he still has not done anything about the raison d'etre of Panneerselvam's dramatic revolt. VK Sasikala has not yet been shown the door though the OPS camp is mounting pressure that it should be done by convening a special meeting of senior leaders on Monday before the merger can take place.

If OPS is still returning home, it is also because EPS has left him with no other choice. A further meltdown of his already depleted ranks is certain if OPS still acts pricey. The flip side is that his entire team is unlikely to support the merger. Sources say at least two MLAs are likely to gravitate towards the Dhinakaran camp instead of the EPS plus OPS combo pack.

Over the last couple of days, old videos that show just about every senior leader of the AIADMK falling at Sasikala's feet in the days after Jayalalithaa's death, are doing the rounds over WhatsApp. E Madhusudhanan, who is in the OPS camp, was the first to request her to take over as general secretary in December and OPS himself had a very respectful spinal position after she was elected as party chief. 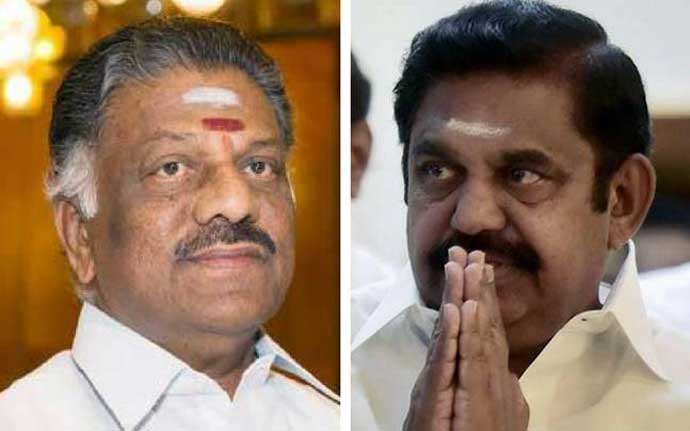 With OPS promising to announce the good news in a couple of days, Monday is being spoken of as the D-day.

In a video from inside the Golden Bay resort in Koovathur in February, EPS is seen falling at Sasikala's feet after she names him as the CM designate. Other ministers indulge in the AIADMK-patented style of sycophancy at the Jaya memorial even as Sasikala makes no attempt to stop them from doing so.

The attempt is to show a mirror to these leaders and also tell the people of Tamil Nadu about the turncoat nature of their leaders. Nudged by the BJP to come together minus the Mannargudi family, the EPS and OPS camps are presenting themselves as Ganges-purified by sidelining Dhinakaran.

But EPS knows dishing out the Dhinakaran treatment to Sasikala would be playing with fire. A majority of the MLAs, MPs and district secretaries in the AIADMK owe their political career to Sasikala's influence over Jayalalithaa's final decision. They owe nothing to either EPS or OPS and may not take kindly to Sasikala being treated in a disdainful manner unless they think only of their immediate political survival.

Dhinakaran had 20 MLAs by his side during the Melur public meeting in Madurai district on August 14. The Chennai meeting on August 23 will be a make or break affair for him.

Not only is it necessary for him to retain those 20 lawmakers but also to try to attract those OPS campers who are not happy with the merger. Where does Dhinakaran go from here? Bringing down the government by aiding and abetting the DMK-sponsored no-confidence motion will earn him the name of a traitor, as someone who brought down "Amma's government" with the political enemy's help. But with EPS and OPS in no mood to do business with him, he may be left with no option but to activate his "sleeper cells" who he claimed are present in the ruling AIADMK. Providing political oxygen to EPS will make little sense to the Mannargudi clan, that is now firmly backing Dhinakaran.

As he prepares to smoke the peace pipe, OPS would do well to audit his dharma yuddham, which he launched after being removed as CM. He hoped the rank and file of the AIADMK will flock to him but only a dozen MLAs did and he is now having to return to the same Cabinet as deputy CM, a post even Sasikala may have been willing to give him if he had stayed on. The only gain is that the nightwatchman OPS is now seen as a frontline batsman.

The bigger challenge for OPS will be to run the party where he will be the chief, with or without the tag of the general secretary. In the last six months, there has been much bad blood with both the EPS and OPS campers taking vitriolic potshots at each other.

To expect everyone to fall in line just because EPS and OPS have procured a "Happy Ending" board, would be wishful thinking. OPS will be party boss but without the kind of control Jayalalithaa used to command.

It is quite obvious that there are no winners at the end of this political stand-off. All they have done in the last six months is to indulge in politicking instead of governing Tamil Nadu. And the AIADMK will remain a divided house despite the facade of a merger.

With OPS promising to announce the good news in a couple of days, Monday is being spoken of as the D-day.

Incidentally, it is Amavasya on August 21 and the almanac-obsessed AIADMK would tell you a no moon day is considered auspicious by Tamilians.