Ajit was reportedly hopeful of getting support from 35 MLAs whom he had helped at some point of time to run their educational and cooperative institutes.

Devendra Fadnavis shares his birthday, July 22, with Ajit Pawar, who was his deputy chief minister for four days between November 23 and November 26. There is no other similarity between the two. So, when Fadnavis decided to take Pawar's support to form a government many leaders in the BJP were left surprised. The unnatural alliance lasted just four days and eventually ended with their resignation.

When he raised a flag of revolt, Ajit was fully confident that he could win the backing of at least 30 Nationalist Congress Party (NCP) MLAs. He told BJP leaders that he was averse to the idea of working with Shiv Sena chief Uddhav Thackeray and Congress leader Prithviraj Chavan, his former boss.

Fadnavis's biggest mistake was to take Ajit's claim at face value. "We did not prepare a rescue plan in case Ajit backs out," a senior BJP leader told Mail Today. "This is exactly what happened. We fell flat because we were banking too much on him," the leader said. Ajit's credibility and his political career were at stake when he supported the BJP. Now, as he has failed to save the BJP government, Ajit's career is in limbo. 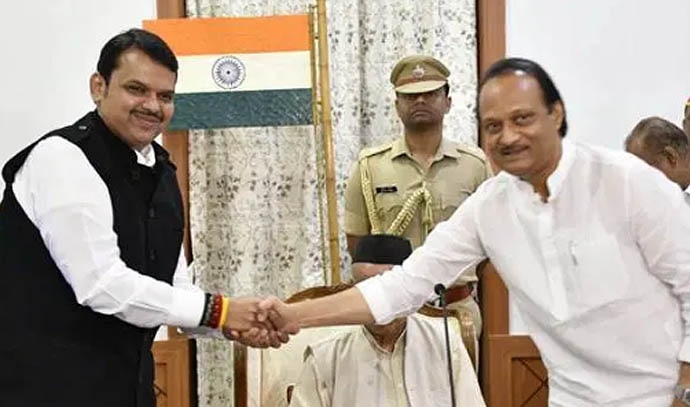 One of his close confidants says he was hopeful of getting support from 35 MLAs whom he had helped at some point of time to run their educational and cooperative institutes.

"He [Ajit] differed with [Sharad] Pawar many times and returned to his fold. This time, however, he has crossed the Lakshman Rekha (limit) and it will be difficult for him to reconcile," Abhay Deshpande, a political commentator, said. Meanwhile, the Shiv SenaNCP-Congress combine has emerged stronger in the political crisis. It claims to have the support of 162 MLAs. "I am sure the numbers will grow in a day or two," said Shiv Sena leader Anil Desai.

Thackeray has emerged as a strong candidate for the chief minister's post. The Shiv Sena is likely to keep the post for the tenure. Congress' Vijay, also known as Balasaheb Thorat, and NCP's Jayant Patil, are likely to be his deputies. NCP leader Nawab Malik said, "the Shiv Sena was never a hardcore Hindutva-oriented party. They changed in the company of BJP." This indicates that Thackeray will have to listen more to Sharad Pawar than his own party cadre.