The said terrorist act at the Ajmer Sharif shrine was not committed by an Islamist group but by right-wing Hindutva terrorists, members of RSS.

Picture this. A group of extremists planned and executed a terror attack during a holy month at a centuries old religious shrine with an aim to kill devotees and strike panic and terror into hearts and minds that could also have resulted in communal enmity.

After prolonged trials for many years, 26 witnesses turning hostile and acquittal of some high profile accused, finally three are convicted and two are given life sentences (the third one is already dead). What more, all three convicts had associations with one particular ideological fountainhead at the time of execution of the crime.

The above news appears to be the perfect recipe for "breaking news" kind of coverage with unending panel discussions, dissecting every aspect of the event, its chronology, stands of different political parties, and finally, demand for a ban on the group whose members were allegedly involved in the terrorist act.

Except, none of this happened in prime time discussions. Journalists and celebrities who keep outraging and commenting on every incident hardly sent any tweet. And those who reported refrained from using the terror tag in the stories.

The reason was plain and simple - the said terrorist act of 2007 at the Ajmer Sharif Sufi shrine during roza-iftar was not committed by an Islamist group but by a module of right-wing Hindutva terrorists, who were members of the RSS.

Sample how different newspapers referred to convicts in the blast case whose quantum of punishment was announced on Wednesday.

Note the strategic reference to the RSS after semicolon for Aseemanand, who was acquitted, but not for those three convicted.

According to The Hindu, which had a detailed report on Thursday, Patel was associated with the RSS in his home state Gujarat, while Gupta was working in Jharkhand for the Sangh Parivar. Joshi was an RSS pracharak in Madhya Pradesh and was shot dead on December 29, 2007.

The Times of India referred to them simply as "convicts" while Hindustan Times (online and several editions) called them "Hindu right-wing activists". Although the text more or less was same, in the national edition, they strangely had put the headline in bold and colour: "Two Hindutva terrorists get lifer in Ajmer blast case" in the "nation" section (on page 8).

In other reports, they were also referred to as “activists” and “workers” but not as terrorists or terror accused although the court found them guilty of involvement in terrorist activities and provoking religious sentiments (The Asian Age).

According to The Indian Express, the court also questioned the clean-chit given to two other accused as well as “suspicious persons”, including Sadhvi Pragya Singh Thakur and senior RSS functionary Indresh Kumar without invoking appropriate sections of the CrPc.  It has fixed March 28 for the closure of the matter by the NIA DGP.

Express also reported that public prosecutor Ashwini Sharma had argued in court: “(T)he actions of the convicts and other accused deeply hurt the established values of Hinduism.” Defence advocate J S Rana had, however, contended, “At most, it can be said that those involved in this case acted foolishly while considering themselves as being ethical.”

Joshi and Aseemanand are also accused in the Samjahuta blast, Mecca Masjid blast and Malegaon blast cases, all of which were earlier attributed to Islamist terror groups but later the names of right-wing Hindu terror groups came up. 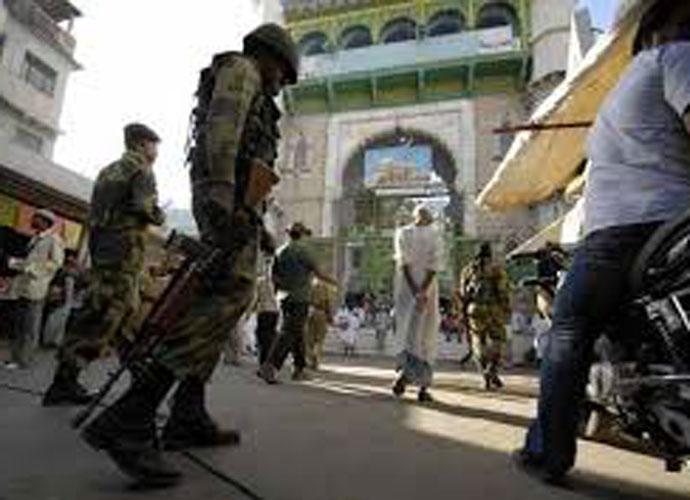 After prolonged trials for many years, 26 witnesses turning hostile and acquittal of some high profile accused, finally three are convicted and two are given life sentences in the blast case. Photo: India Today

A day after the Ajmer Dargah attack, one of the most famous national security experts of the country, Praveen Swami had written a detailed article in The Hindu terming it a “war against popular Islam” by the extremist forces.

Three pilgrims had died and 15 others injured when a bomb had exploded on the evening of October 11, 2007, at the shrine of Khwaja Moinuddin Chishti. Earlier, Rajasthan anti-terror squad (ATS) had investigated the case but later it was transferred to the National Investigation Agency (NIA). A special NIA court had acquitted Aseemanad and six others giving them “benefit of doubt” earlier on March 8.

Aseemanand had confessed his involvement in these cases before a metropolitan magistrate in Delhi’s Tis Hazari court in December 2010 and also in a detailed interview to The Caravan (published in February 2014) where he termed it as revenge for “terror acts of Muslims”, but he later retracted his statement.

These cases had brought to light hitherto unknown module of Hindutva or saffron terror that created furore in the corridors of power, many even questioning the use of those terms. In fact, since the last government has taken over, investigating agencies and prosecutors have gone “soft” on Hindutva fundamentalists.

A local court in Madhya Pradesh last month acquitted Pragya Singh Thakur and others in the Sunil Joshi murder case. After acquittal in the Ajmer case, Aseemanand has got bail in the 2007 Mecca Masjid blast case, and according to media reports, the NIA may not challenge it.

Conviction in the Ajmer shrine blast is hence important as for the first time RSS cadres have been found guilty in a terror case. It is also a proof that terror certainly has no religion although in the eyes of the Indian media it appears to have just one colour.

Also read: Lok Sabha passes Finance Bill, 2017 - this is why we need to freak out

#Right-wing terror, #Aseemanand, #RSS, #Ajmer blast
The views and opinions expressed in this article are those of the authors and do not necessarily reflect the official policy or position of DailyO.in or the India Today Group. The writers are solely responsible for any claims arising out of the contents of this article.