The former UP CM moved heaven and earth to cock a snook at the supreme court order.

Precisely three-and-a-half months ago, when I pointedly asked Akhilesh Yadav about the opulence in the bungalow allotted to him as former chief minister of Uttar Pradesh, he was livid. He abhorred the very idea of being questioned about how extravagant he had been in expanding, renovating and refurbishing the sprawling house spread across a 60,000-sq ft plot in Lucknow most plush area — Vikramaditya Marg.

I had simply sought to draw his attention to an allegation that even though he had always been critical of Mayawati having spent about Rs 103 crore on the construction of a new bungalow for her "ex-CM" days, he did not lag too far behind by allegedly spending about Rs 50 crore-60 crore on the renovation and expansion of his house.

"I have spent a Rs 1000 crore,"  a suddenly furious turned Akhilesh shot back at me. "Go and do whatever you can. Now I am out of power," he screamed.

"Don’t forget, I believe in hitting back straight. I don’t attack from behind," he added in a threatening tone. I was left with no choice but to leave the party where he was the guest of honour. Later, when someone gave me brief access to documents showing that the very tastefully done house had furniture and furnishings alone worth Rs 21 crore, I  could understand why the former UP CM was so averse to being asked questions relating to that house.

It was in the early 1970s that Uttar Pradesh started this unique practice of allotting houses for life to all former chief ministers. Successive chief ministers until the late 1980s would move out of the official residence of CM into modestly done houses. With 1990s came the new era of chief ministers identifying a house for their future “ex-CM” days and getting it renovated to their personal taste. Since it was a sitting chief minister taking the call, there were no limits on the expenditure.

As the years went by, the taste of the incumbents got louder and extravagant, taking the renovation bills higher and higher.

Mulayam Singh Yadav was the first former CM to go for additional construction and expensive renovations while sitting on the CM’s chair. His successor, BJP leader Kalyan Singh initially restrained himself, but during his second stint, when he turned a “different CM”, he too did not hesitate to turn somewhat lavish. He, however, chose to be more generous about large-scale renovation of the adjoining bungalow, he allotted to his most-trusted aide Kusum Rai, who was not only made a Rajya Sabha member but the allotment of her bungalow was transferred in the name of a trust created in her father’s name for a period of 30 years. Damage to public property: The bungalow after it was vacated. [Credit: PTI photo]

Mulayam’s house witnessed larger renovations during his second and third stints as CM. But Mayawati chose to cross all limits during her fourth stint, when she rode to power on her own party’s strength. She decided to not only pull down the house she had allotted to her self as “ex-CM” during her first tenure and that was expanded and refurbished with the taxpayer’s money during her second and third tenures.

As if that was not enough, she acquired the adjoining building that housed the office of state sugarcane commissioner and merged it with her’s, thereby creating a nearly 60,000 sq ft  estate in the state capital’s VIP Mall Avenue. A giant-sized fortress-like mansion was built on this plot with 18-foot-high walls all around and tall gates specially forged out of “asth-dhatu” (a special alloy of eight metals). The estimated cost of the pink Dholpur stone "chateau" was about Rs 103 crore, all spent by the government.

Even though Akhilesh had always condemned Mayawati for her extravagance, he did not bat an eyelid to follow suit when it came to preparing a bungalow for his own future. His choice did not commence with this Vikramaditya Marg bungalow. Earlier, he had identified another double-storyed house in the neighbourhood of Kalidas Marg , got the office of the chief town planner shifted from there, typically on the same lines as Mayawati had shifted the sugarcane commissioner’s office. 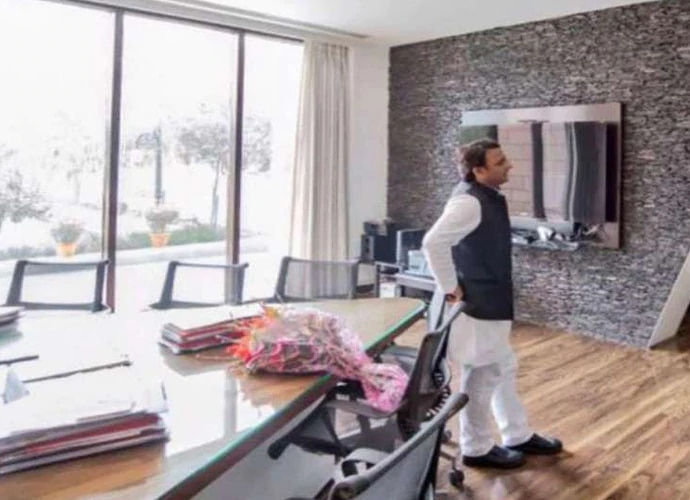 Dream house: Akhilesh Yadav in the house that he was forced to leave following the Supreme Court order. [Credit: Agencies]

But soon after a couple of crores had been spent on the renovation of the building, Akhilesh changed his mind and set his eyes on the Vikramaditya Marg bungalow, which was then the official residence of the state chief secretary. Once again, much like Mayawati, he got the adjoining house on the rear side (facing Kalidas Marg) also pulled down and the plot merged with the Vikramaditya Marg house, thereby creating a giant 60,000 private estate for himself for life. It took months before additional constructions were made to create a gym, an indoor badminton court, besides guest rooms, etc, etc.

The refurbishing made it far more luxurious and opulent than the official residence of the chief minister. But none had imagined in their wildest of dreams that the same chief minister who had spent a fortune to spruce up his house would strip the house of all that grandeur on leaving the premises.

As a matter of fact, Akhilesh was quite confident that he would never have to abandon the house in his lifetime. After all, that is how it had been. But thanks to a Supreme Court order in a PIL moved 14 years ago by a former Vidhan Sabha secretary DN Mithal and pursued after his demise by a highly reputed former IAS officer, SN Shukla, all former CMs were asked to vacate their respective privileged accommodations.

Akhilesh moved heaven and earth to cock a snook at the apex court order. When the order came initially in 2016, while Akhilesh was in power, he enacted a new law for allotment of houses to all former CMs. That served his purpose to circumvent the court order. Rival political parties looked the other way as it suited them just fine. After all, the four other former CMs enjoying the privilege were Kalyan Singh (BJP), currently the governor of Rajasthan, Union home minister Rajnath Singh, Mayawati (BSP) and Narayan Dutt Tiwari (Congress).

But persistent pursuing by the petitioner eventually brought another order from the apex court, quashing the new enactment. That came as a big blow to Akhilesh, but he was still not ready to give up.

This time, he got his father Mulayam Singh Yadav to seek the help of current chief minister Yogi Adityanath to let him and his father retain possession of their respective adjoining bungalows. Mulayam is understood to have suggested to the chief minister to allot his and his son’s house to Samajwadi Party leaders Ram Govind Chaudhary and Ahmed Hasan in their respective capacities as leader of the Opposition in Vidhan Sabha and Vidhan Parishad. That would have enabled the father and son to retain the possession of the same bungalows, as both Chaudhary and Hasan have their own homes.

However, someone spilled the beans and the Mulayam-Adityanath meet hit the headlines. Suspecting a mole in his own secretariat, the chief minister fired two of his OSDs, but the damage was done and there was no way that Yogi Adityanath could have obliged Mulayam without facing the political fallout of such an underhand deal.

Akhilesh then moved the apex court with a request that since he did not have any dwelling unit, he and his father may be allowed to retain their respective bungalows for two more years so that they could get houses built for themselves. The petition was moved before a vacation judge who did not see any urgency in the plea. That left Akhilesh completely high and dry and he was left with no choice but to vacate the premises, he as so obsessed about.

Meanwhile, the argument given out repeatedly by SP leaders that Akhilesh needed some place to meet common people also fell flat as the different properties in his possession in the same neighbourhood also became public. Besides, the SP state headquarters, barely 200 metres from his bungalow, there were two other bungalows acquired by the SP in the name of Lohia Trust and Janeshwar Misra Trust.

And another 200 metres down the road stood a gigantic 30,000 sq ft plot of private land, owned by the father and son on which construction of two independent mansions had already begun. Barely 300 metres ahead along the same road was yet another commercial property owned by Akhilesh, who had let it out to a leading public sector bank.

While Akhilesh and Mulayam were driven against the wall to vacate the bungalows, Kalyan Singh and Rajnath Singh chose to hand over possession of their houses without any fuss. ND Tiwari, who was hospitalised in Delhi, is yet to hand over. Mayawati vacated the official premises, but she was desperately trying to get it converted into a Kanshi Ram Memorial, even as four other memorials, costing the state exchequer nearly Rs 2000 crore already exist in Lucknow.

Yet, however, the damage visible in the house vacated by Akhilesh Yadav remains unparalleled in the history of the state. While Akhilesh was busy issuing repeated rebuttals to the “damage” charge, the official machinery has sufficient reason to believe that it could not have been anybody else’s act.

Sure enough Akhilesh knew that the charges against him would not stick because the inventory of the bungalow would not include all the luxuries that were added unofficially — be it the luxurious gym or the state-of-the-art badminton court or the high-end fittings in the bathrooms, etc, etc. After all, it is not uncommon for chief ministers to be ordering anything under the sun without having anyone to put those on record. The bills are cleared by different government departments and public undertakings, without the estate department coming into the picture.

Very few were ready to buy his counter-allegation that the ransacking of his bungalow was the handiwork of the BJP rank and file. Akhilesh’s frivolous defence and wild allegations obviously reflect his desperation and frustration.

Post your comment
#Vikramaditya marg, #Samajwadi Party, #Lucknow, #Uttar Pradesh
The views and opinions expressed in this article are those of the authors and do not necessarily reflect the official policy or position of DailyO.in or the India Today Group. The writers are solely responsible for any claims arising out of the contents of this article.