Akhilesh Yadav skips alliance with biggies for UP polls 2022: 5 reasons

After denying any alliance with Congress and BSP, and now AAP, SP leader Akhilesh Yadav has rejected all pre-poll alliances with big parties for 2022 UP elections. Why is the SP supremo keen on contesting alone without big fish?

Samajwadi Party leader Akhilesh Yadav has been moving very cautiously as the 2022 Uttar Pradesh Assembly elections inch closer. The former UP Chief Minister has so far not announced any alliance with any big political party, because he probably thinks that it might dampen his party's position in the Assembly elections 2022. On December 24, 2021, SP also denied any alliance with AAP, putting an end to all speculation that began with AAP Rajya Sabha MP Sanjay Singh and UP election incharge of AAP meeting Akhilesh Yadav at his residence. But news says the SP supremo is not willing to concede seats to AAP.

If we read between the lines, much of what Akhilesh is doing now is borrowed from exactly what he did in the 2012 elections. Akhilesh Yadav, in 2012, contested alone without any big allies. He was successful. In 2012, the SP supremo organised massive rallies, reached out to the interiors of the constituencies on his bicycle, and acquired the trust of voters on his father Mulayam Singh Yadav’s name. And the result: SP swept the elections with 224 seats, leaving the incumbent Bahujan Samaj Party (BSP) with a mere 80 seats.

Congress, on the other hand, performed worse than the BJP with 28 seats. BJP under Uma Bharti (former Cabinet minister and former CM of Madhya Pradesh) got 47 seats. So, when it was time to make the decision of not allying with Congress, BSP and now AAP, it was evident that Akhilesh would sink and swim alone this time.

Here are 5 reasons why Akhilesh Yadav has decided to contest the UP elections without any big allies: SP supremo Akhilesh Yadav has adopted a different strategy this time. Instead of choosing the big fish, the former UP CM has opted to make a coalition of small regional players which target particular groups. Senior functionaries of the party have confirmed the same.

For example, SP has aligned with RLD, which has a strong base in the rural belt of Western UP, which witnessed mass protests by farmers in 2021. Similarly, SP has allied with Suheldev Bhartiya Samaj Party which enjoys support among the backward communities such as Rajbhars, Chauhans, Pals, Vishwakarmas, Prajapatis, Baris, Kashyaps.

Another of SP’s alliance parties, the Mahan Dal, has a hold among castes like Shakyas, Sainis, Mauryas and Kushwahas in the western UP districts. Also, Janwadi Socialist Party, another SP ally, has a base among the Nonia community, which might benefit the SP in 2022 elections.

Also, SP leader Akhilesh Yadav has buried the hatchet with his uncle Shivpal Singh Yadav ,with whom he had severe differences prior to the 2017 Assembly elections. Akhilesh, with all his supporters, went hammer and tongs against Shivpal, who he said was dominating in nature. Shivpal left the party and formed his own Pragatisheel Samajwadi Party (PSP).

On December 16, 2021, Akhilesh Yadav, with a few of his supporters, met Shivpal at his residence and they have now announced an alliance. The two parties SP and PSP would now contest the 2022 Assembly elections together. In essence, Akhilesh does understand that the coldness of Shivpal’s supporters might cost him a considerable vote share, which he wouldn’t want at any cost. One of the reasons why SP didn’t concede to AAP in the number of seats is because AAP is a regional party that is more or less centred around the national capital, Delhi. Plus, the party has absolute zero presence and recognition on the ground that might fetch votes for its candidates. An SP spokesperson on condition of anonymity spoke to The Print. He said, ”In our talks with the AAP, we realised that we were not gaining anything because, as we see it at this point, they do not have a specific support base.”

The AAP aimed at focussing attention on the NCR region and the urban pockets in UP. But SP already has strong candidates in these regions; either of its own, or its allies like the Rashtriya Lok Dal (RLD). So, AAP neither had much to offer, and nor was it in a position to bargain much from the SP. Hence, the party has decided to contest alone in 403 seats. We’ll see if it gets what it aims for in the 2022 elections. The alliance between the SP and AAP could not see the light of day because the SP was approaching the elections with its caste calculations and demographic equations while AAP was focussing on development and welfare agendas as the talking points of the elections.

Unfortunately, in a state like Uttar Pradesh, all talk of good governance always take a back seat when it comes to caste. Caste steers Uttar Pradesh. AAP's approach to voters is convincing them that they will replicate the Delhi model of governance but SP, a strong regional player of the state for decades, knows its voter to the bone. Uttar Pradesh sends 80, which is the highest number, MPs to the Parliament. The caste arithmetic of Uttar Pradesh is very complex. The phrase that in Indian elections, people don't cast their vote, they vote their caste, fits in perfectly with Uttar Pradesh.

The fact that the alliance of SP with Congress didn’t work in 2017 was understandable. In fact, the battle of caste in UP is no longer fought by Congress, which it once was. That fight is led by the OBC, Yadav party of Mulayam Singh Yadav, and the SC party of Late Kanshi Ram, now led by his successor Mayawati. So, Congress was never in the picture.

When SP and BSP came to contest on all 80 Lok Sabha seats, taking on the Modi-Shah brigade, the odds were stacked against the BJP on paper. The alliance was sought to give a huge boost to SP and BSP, which was to consolidate the opposition vote and defeat the BJP.

But the results were startling for everybody. Just like 2017, the caste arithmetic went wrong and regional parties lost big time. BJP with its ally Apna Dal won 62 seats, while SP won 5 and BSP got 10 seats. In fact, the alliance paid huge benefits to the BSP in the 2019 elections, which had drawn a blank in the 2014 elections. Akhilesh was once again shattered. He gained nothing out of the election.

5. DEBACLE OF 2017 UP ASSEMBLY ELECTIONS 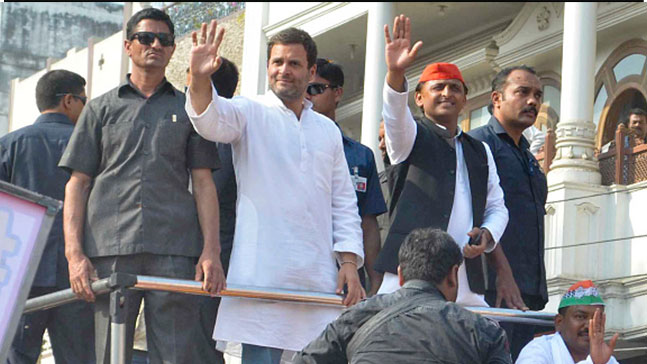 Akhilesh Yadav joined hands with Rahul Gandhi in 2017 UP Assembly elections to combat the Modi wave. Akhilesh thought it would further his prospects of becoming CM for the second time, while Rahul Gandhi got a helping hand from SP to form a ground in UP which once existed. But nothing of that sort worked. SP was decimated to 56 seats in the 2017 UP Assembly election results, while Congress was reduced to 7 seats. Akhilesh Yadav decried the alliance with Congress after the results, and announced no further alliance.