Why Chandrababu Naidu, not Jagan Mohan Reddy, should be blamed for World Bank 'dropping' $300 million loan for Amaravati

Does the truncated and cash-strapped state of Andhra Pradesh need the world's best capital city or just a functional capital to begin with?

The Andhra Pradesh government had to scratch its head and scramble for a suitable building to house the Raj Bhavan, when Vishwa Bhushan Harichandan, who is yet to assume charge, was appointed the first governor of the truncated state, five years after its bifurcation.

He would be housed in the erstwhile camp office of the chief minister, a building subjected to a makeover from an irrigation circle office. Later, it was temporarily used as High Court. Now, it’s being spruced up again at a cost of Rs 25 crore.

Chief minister YS Jaganmohan Reddy lives in a building privately owned by him and his party, constructed a few months ago.

N Chandrababu Naidu, the leader of the Opposition, lives in a controversial private building on the banks of the Krishna. This was declared illegal and unauthorised by Naidu’s own government earlier and after he occupied it, the nature of the building apparently became ‘sacrosanct’. That a controversy is raging around it and it is set for demolition is a different story.

Even the Chief Justice of India resides in a temporary accommodation. In fact, the ‘costly constructions’ — built at a cost in excess of Rs 7,500 per sq ft — of Secretariat, Assembly and High Court are all ‘temporary’. They are not part of the grandiose master plan of Amaravati, the imaginary capital city of Andhra Pradesh, which was yet to be notified as a capital city officially by the Centre. 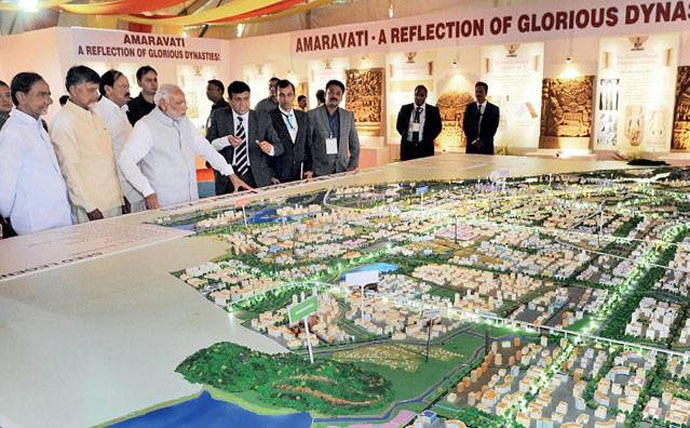 Naidu’s proclivity for profligacy could be seen from the government order issued on February 5, 2019, sanctioning Rs 4,900 crore with an estimated interest during the construction period at Rs 504 crore.

Amaravati has never seized to be away from controversy — beginning from its very location to purchase of lands by politicians and businessmen close to Chandrababu Naidu and the Telugu Desam Party (TDP), “pooling” of 33,500 acres from farmers in lieu of a ‘developed’ land that would be a fourth of the donated land. Aside from this, commercial advantage was also promised to the farmers who gave their lands. Some villages refused to part with their land which yields three crops a year, a rare agricultural phenomenon in India.

Environmentalists cried hoarse for locating the capital city in fertile farm lands, depriving the tillers of their livelihood. In five years, the most fertile farm lands were left dry and tenant farmers had to lose their source of living. However, some landlords who parted with the land for a fortune do echo a positive sentiment in favour of the new capital of Amaravati.

When author Sriram Karri, who penned Autobiography of a Mad Nation, wrote about the grandiose plans of Naidu over the dream capital of Amaravati, Karri was trolled by the diehard fans of Naidu on Facebook and Twitter in August 2015. But Karri was the first among those few to call Amaravati a disaster.

The recent World Bank decision to ‘drop’ the idea of extending $300 million isn’t because of a change of guard in a state that doesn’t still have a capital city officially.

As if to rub the proverbial salt on the wound of Naidu, the World Bank on July 22 asserted that it would continue to support the AP government with $1 billion, including the $250 million loan for a health programme signed in June 2019. The ‘dropping’ of the $300 million for Amaravati was due to withdrawal of application by the Centre.

Even though TDP Naidu and the media that has been religiously toeing his line have tried to deflect the blame on to chief minister Reddy, the reality is that the World Bank withdrew the loan because it smelt a rat. Also, the government of India stepped in and withdrew the request for the loan.

I can’t agree more. If the World Bank has ‘dropped’ the idea, it’s because of the Narendra Modi regime withdrew the request for aid for this jinxed project. It didn’t want to compromise on its oath of office to “uphold the sovereignty and integrity” of the country anywhere.

The World Bank ‘dropped’ the idea of the $300 million loan proposal as part of the estimated $715 million Amaravati Sustainable Infrastructure and Institutional Development project. This was a result of the withdrawal of the request of the government of India for financing the project and the World Bank’s board of executive directors was informed that the proposed project was no longer under preparation following the government’s decision. All decisions in respect of World Bank loans would be taken by the Department of Economic Affairs (DEA) under the Ministry of Finance. The World Bank had to oblige the decision of the DEA not to move forward with the project.

The AP government had sought a loan of $1 billion. However, the Centre initially cut it down in September 2016 itself as the rules did not permit for a billion-dollar loan. Accordingly, a loan proposal was sent for $500 million which was further slashed to $300 million.

In fact, the World Bank had instituted a probe through an Inspection Panel in 2017 to look into large-scale environmental concerns, forcible takeover of fertile lands by the Andhra Pradesh Capital Regional Development Authority (APCRDA), constituted to develop the ‘dream capital’ of Naidu.

A lot of farmer groups and residents in the proposed AP Capital Region, from villages of Penumaka and Undavalli in Tadepalli mandal and Bethapudi and Yerrubalem in Mangalagiri mandal, and a few other villages around, complained to the inspection panel of the World Bank on May 25, 2017, about a possible loss of livelihood for many along with environmental degradation. This called out the subterfuge of the state government in proceeding with its plan.

Following large-scale violation of laws, including allowing the sale of assigned lands (given only for cultivation without the rights to sell to Scheduled Caste beneficiaries) and endowments lands, the cases filed in National Green Tribunal (NGT) by journalist Pandalaneni Srimannarayana (who is no more), and other charges of coercion of farmers, affecting of agriculture, the World Bank wanted to conduct a further review of the project. Sighting a potential embarrassment, the Centre withdrew the loan application, instead of allowing the World Bank probe.

Meanwhile, an advocacy group, Centre for Financial Accountability (CFA), spurned the World Bank, a couple of months ago, for not sharing the land pooling scheme details.

The CFA report suggests that the LPS would affect almost 1.50 lakh people in the capital region.

It is widely talked about that the World Bank wanted to go deeper into the deal with the investigation and sought permission from the government of India. However, the government refused permission saying that the project was no longer under preparation.

Amaravati has been in the eye of storm ever since it was conceived. In fact, in his recent TV interviews, Reddy did not respond directly to the queries on whether his government would continue Amaravati as the capital. He stuck to the stand that it is a colossal scam of a very high magnitude and tried to expose the decadent policies of the TDP in creating the new capital with vested interests. Jagan Mohan Reddy hasn't spelt out if his government would continue Amaravati as the capital. (Photo: Reuters)

Reddy went to the extent of alleging that Naidu, who proposed to create the capital, indulged in ‘insider trading’ by misleading the people of the state for six-long months suggesting that the capital would be located near Nuzvid or somewhere else. Being fully aware that he would locate the capital between Guntur and Vijayawada, Naidu and his cronies and his chosen businessmen, allegedly acquired large tracts of land from the farmers.

Reddy even alleged that Heritage Food India Ltd, promoted by Naidu’s family, too bought some 14 acres of land parcel in the proposed capital region before it was officially notified. He said that it needs to be investigated into and actually constituted a Cabinet sub-committee under the stewardship of Finance Minister Buggana Rajendranath Reddy.

In fact, the committee constituted by the Centre under the leadership of retired IAS officer Sivaramakrishnan, which did an in-depth study of the area for locating the capital city, stoutly opposed the idea of locating the seat of power of Andhra Pradesh in the area, presently christened as Amaravati. Still the AP government went ahead with its plans, jettisoning the report of the committee.

The Naidu regime had allocated land for nine thematic cities to comprise the capital city in an area of 217 sq km. They included cities for tourism, knowledge, electronics, heath, financial, sports, justice, media and government.

The state government inked a pact with Singapore Consortium for the development of 6.84 sq km with the state government committing to spend over Rs 2,000 crore to create basic infrastructure like roads, drainage, etc. Any controversy arising out of this would have to go for arbitration in a London court, as per the memorandum of understanding. This is seen as clear defalcation, if the work begins.

The state government had selected Maki Associates of Japan first. After it had pulled out of the project the chairman of Maki Associates spitted fire on the AP government. In a missive dashed off to the Indian Council of Architect, Maki Associates fumed at the Naidu regime for ‘fraudulently’ removing his company from being the architects of the new Capital city.

Eventually, Foster + Partners of London was chosen as the architects for designing the new capital. Funnily, the former AP chief minister tasked a group of minister under the aegis of P Narayana to consult movie-maker SS Rajamouli, who had built an imaginary set of ‘Mahishmati’ city for his blockbuster movie, Baahubali. 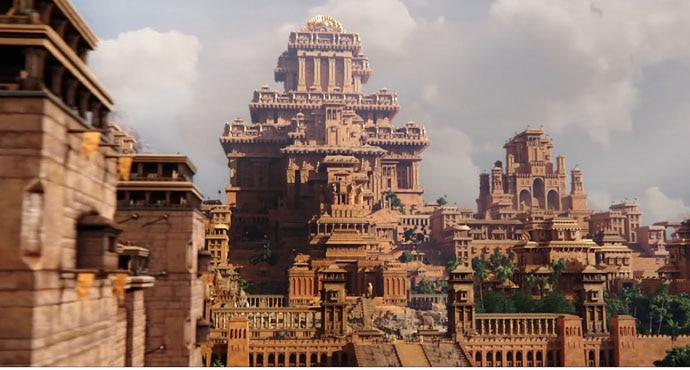 Recognising the fact that it’s no serendipitous encounter in his filmy peregrination, Rajamouli politely resisted the idea suggesting that he was not an engineer or an architect and that he could not be part of designing a capital city.

Naidu, who is now trying to blame the Reddy regime for the World Bank’s dropping of funding Amaravati, prefers selective amnesia rather than recall his promise to create a new capital a la New York, Paris, London, Asthana, Seoul, Tokyo, Singapore, Kula Lumpur, Istanbul (after visiting each of these cities, Naidu had announced he would build Amaravati on those lines)?

Does the truncated and cash-strapped state of AP need the world’s best capital city or just a functional capital to begin with. Let us leave it to the wisdom of new Jaganmohan Reddy, who made a huge residence-cum-party office in Amaravati.

Also read: From Raja to Commoner Rank: Once AP CM, Chandrababu Naidu is today facing a huge reversal of fortune

Post your comment
#World Bank, #Jagan mohan reddy, #Chandrababu Naidu, #Amaravati
The views and opinions expressed in this article are those of the authors and do not necessarily reflect the official policy or position of DailyO.in or the India Today Group. The writers are solely responsible for any claims arising out of the contents of this article.