Monday (July 10) evening, around 9pm, the first reports started coming in and immediately the wail was picked up by every media outlet and service.

Right from the beginning it was all about Amarnath yatris having been attacked. The reality in retrospect, but in full sympathy to those who lost their lives, is that the attack was not aimed at Amarnath yatris. Reporting it as such may be in tune with nationalistic sentiments, but it is not in keeping with a greater sentiment that transcends nationality - truth.

The fact that the ill-fated bus was caught in a crossfire between militants and police has been confirmed by J&K police personnel to local reporters on the spot. Yet the narrative coming out of mainstream media and hyperactive ultra-nationalist social media is that - terrorists attacked Amarnath yatris.

And in these times of India über alles who dares to question the intent of those who raise their guns against the state? Those citizens who dare challenge a set view of India are anti-national and the man with the gun in Kashmir, fighting security forces, is always a terrorist and not a militant or an insurgent.

Oxford dictionary describes a terrorist as - A person who uses unlawful violence and intimidation, especially against civilians, in the pursuit of political aims.

Col (retd) Vivek Chadha of the Institute for Defence Studies and Analyses thusly explained insurgency as - Purely from a definitional point of view, the Indian Sub-Conventional [Operations] Doctrine defines insurgency as “an organised armed struggle by a section of the population against the state, usually with foreign support. Possible causes of an insurgency including ideological, ethnic or linguistic differences; or politico-socio-economic reasons and/or fundamentalism and extremism. Interference by external forces may act as a catalyst to provide impetus to the movement". There can be other definitions, though this essentially gives an idea of an insurgency. 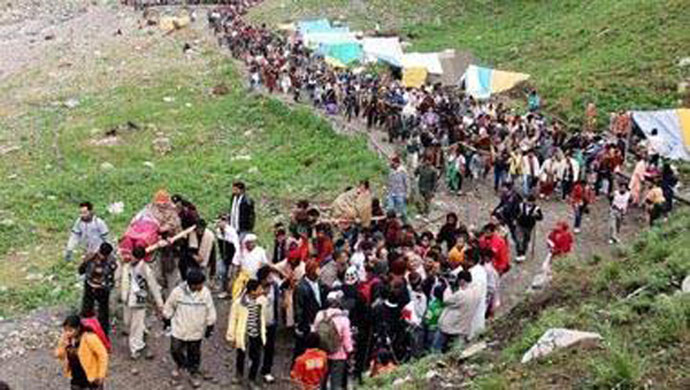 A bus coming from Srinagar got caught in the crossfire. The people in the bus happened to be pilgrims/tourists from Gujarat and Maharashtra.

The national media has conformed to labelling every person who goes against the state as a terrorist. So, to the casual consumer of news, as well as the ardent subscriber to information shared over social media, this report about Amarnath yatris attacked immediately creates a mental image of Hindu pilgrims being attacked by Kashmiri terrorists. This equals Indian Hindu pilgrims being attacked by anti-Indian Pakistan-backed Muslim terrorists of Kashmir. How much more division need be fermented to outrage true blue Indians against those of weaker disposition?

If truth be told, an insurgent assault... a militant attack unfolded in Kashmir on Monday evening. The attack lasted 10 minutes moving through Anantnag towards Batangoo... at first a police check post came under fire at Khanabal, on the northern outskirts of Anantnag, injuring three policemen... and then as retaliatory fire drove the attackers towards Batangoo on NH-1A to Srinagar, a bus coming from Srinagar got caught in the crossfire. The people in the bus happened to be pilgrims/tourists from Gujarat and Maharashtra who had been to the Amarnath shrine and then spent two days sightseeing in Srinagar.

No bus carrying pilgrims or tourists was supposed to be crossing the area at that time, but this particular vehicle, registered in Gujarat, got delayed by two hours because of a tyre puncture. This makes it all the more unreasonable to report that the bus and its passengers were targeted.

Seven lives were lost and many were injured, many more could have died but for the driver of the bus driving through the hail of bullets. There is no point pulling out research and backgrounders on how and when attacks on Amarnath yatris had been executed in the past. There is no denying that the annual Amarnath yatra had been attacked in the past — a total of three times over the years — in 2000, 2001 and 2002. They were acts of terror as the attackers had chosen to target unarmed civilians to spread panic, this attack of July 10, 2017 is not.

What it is, is one more bloody page in the sad history of insurgency in the Kashmir valley. While those who tragically lost their lives and those who were injured, had visited the shrine in Amarnath, this particular incident can not be termed a terror attack on Amarnath yatris.

Call a spade a spade, end this cycle of distrust, disbelief and misinformation. Let not nationalistic ideals blind fact where truth needs to be told. In the words of Gandhiji - Nothing is or exists in reality except truth.