The Amarnath pilgrimage and our search for Kashmiriyat

How this year's Yatra goes will show whether Kashmir has retained its 'special' quality - and the right to demand special status.

They say there was once a spirit, a sprite, called Kashmiriyat. And the Amarnath Yatra was its flower-filled crown.

Kashmiriyat was apparently the syncretic culture of the beautiful state of Kashmir. All states in India are beautiful, of course. But what makes Kashmir special seemingly is its mix of beauty with this extraordinary Kashmiriyat — a sprite, formed of divinity touching human life, a mystical mystery which exists somewhere amidst the region's pine trees. Which smiles at you in reddened apple orchards. Which gleams at you through the sky-hued Dal Lake. Which warms you as you sip kehwa served to you by a host who doesn't care whether you're Hindu, Muslim or not. You are their guest, and that is all they value. 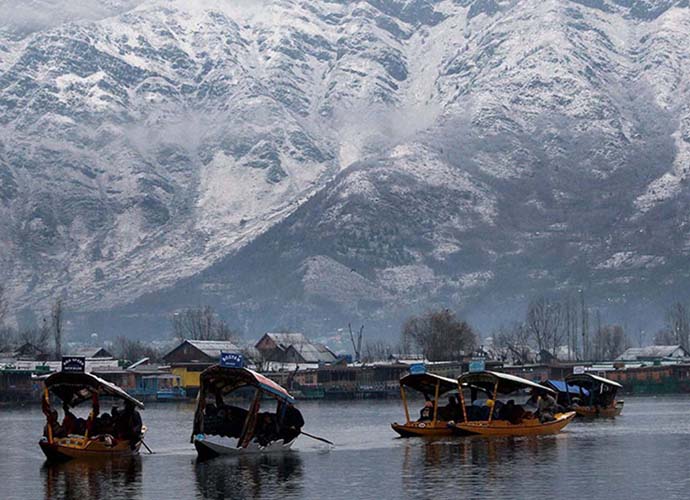 Kashmiriyat glides along the waters of the Dal Lake. 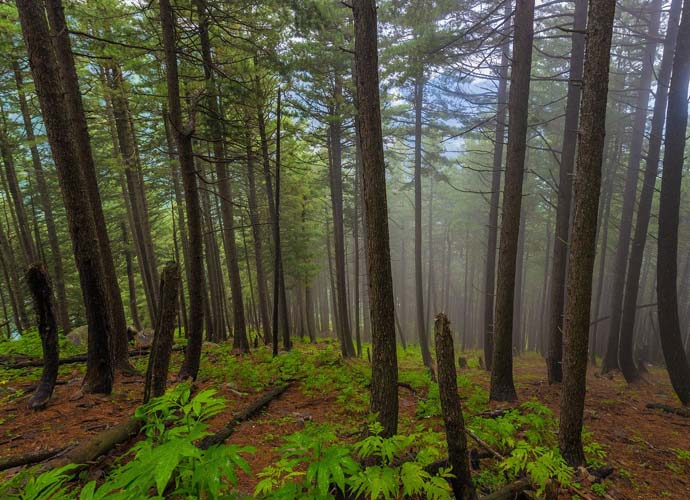 Kashmiriyat: Somewhere in a pine forest.

Or that, at least, has been the marketing spiel.

We have been hearing of this Kashmiriyat for a while now.

The usual tendency when discussing Kashmiriyat is to delve into a hoary cave of antiquity where things are suitably snow-covered and hazy. But it is this cave from where Kashmiriyat is supposed to have come, into a place that welcomed Hindu priests and erudite Sufis. Their ideas, their writings, their philosophy, their verse created Kashmiriyat, we are told, an ideology of humanity, love and liberal acceptance of all those who are very different from us. All those, who, in fact, are the same as we are. Kashmir was once a peaceful home to Sufis and their shrines.

But where is this Kashmiriyat now? Once, it was so powerful — or so visible to those in power — that to preserve its unique qualities, they put Kashmir under a protective cage. The cage reportedly had bars of gold. It also had a name — Article 370 — and it prevented ordinary people from settling there, from buying land or starting businesses in Kashmir, from sinking our roots — all roots are such restless, searching things, after all — in a land we too might have loved.

But, no. Kashmir was 'special' and its Kashmiriyat was too fragile to take the onslaught of the desi hordes. It had to be protected in body and soul from being disturbed by too many of us.

But don't despair, we were also told.

For Kashmiriyat will always be visible in the way Kashmir conducts the Amarnath Yatra — the annual pilgrimage of Hindus, starting today, lasting over two months. Lakhs of Hindus undertake this pilgrimage. It is not an easy one. You first travel to Srinagar, then to Pahalgam, then climb the Himalayan mountains, stopping at Sheshnag Lake, at Panchtarni camp, trek over 12,756 feet, to where deep caves containing a massive Shiva lingam-shaped ice form exists.

To those who mock, this is just ice.

To those who believe, this is pure life.

To Kashmiriyat, it didn't matter either way.

For, once upon a time, the Hindu pilgrims were welcomed in Kashmir, celebrated, generously helped along — and not just by the Shia Muslim and Gujjar-Bakarwal minorities who pitch in with full heart as porters and helpers on the dangerous climb — supported in their effort to traverse the air, the sky, to try to touch something that has existed forever, something which will be there well after you and I die. 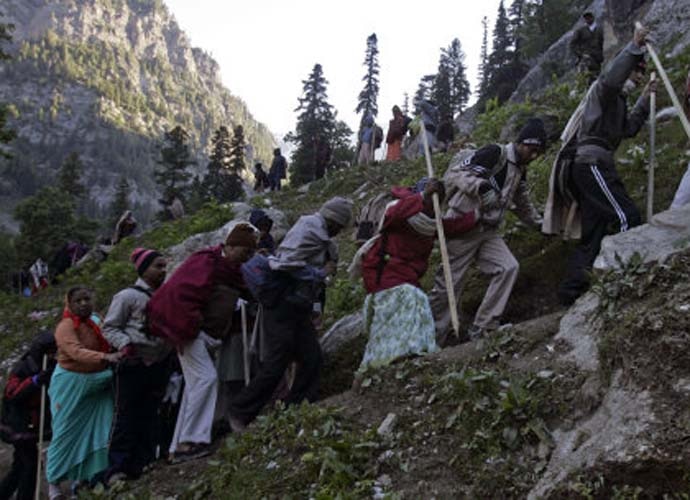 On their way: Amarnath pilgrims were once welcomed in Kashmir.

The Amarnath Yatra was thus the apogee of Kashmiriyat — that song of Sufis, that lap of boat paddles as they sweep a lake which cools us, no matter who we are, no matter where we come from.

But this Kashmiriyat has a very ugly face today.

The state's Hizbul Mujahideen commander has now issued a generous invite to those undertaking the Amarnath Yatra this year. Do come to Kashmir, urges Riyaz Naikoo, in the manner of an oily steward at a dubious hotel door. We won't hurt Amarnath Yatris, he promises (pictured online, yelling, brandishing heavy artillery and grey-green stubble). They come to perform their religious duties. They are our guests. So, is Riyaz Naikoo the face of Kashmiriyat now?

The irony of it all is delicious — if it weren't tragically twisted too.

Naikoo represents the Hizbul Mujahideen whose view of the world is so wide, it cannot accommodate more than those willing to toe exactly its line — a narrow one — of a pure Muslim life. Everyone who disagrees can do so in their afterlife, once Naikoo and Gang assist them there.

To have Naikoo speaking for Kashmir and Kashmiriyat now is a farce, a tragedy — and a clarion call.

This is a farce as Hizbul and its likenesses — the Lashkar louts, the unwashed-looking Jaish brigade, et al — have systematically assaulted whatever Kashmiriyat ever was.

This is a tragedy as it was on the violence of this lot that the Kashmiri Pandits — whose knowledge of Sanskrit and Urdu, whose grasp from the Rajtarangini to physics, whose appreciation of cuisine included thick vegetarian haak to deliciously slender mutton ribs — were kicked out of their own state.

To date, no government — not even the BJP — has seriously tried to bring them back. Everyone makes nice noises about the Pandits, but does nothing as their lands, their homes, their books, their paintings, their music, their clothes, their memories, their loves, are simply, brutally, precisely taken away. 'Ethnically cleansed' in the quietest such cleansing we have seen in modern times.

But why despair, we are told. At least they have their lives. 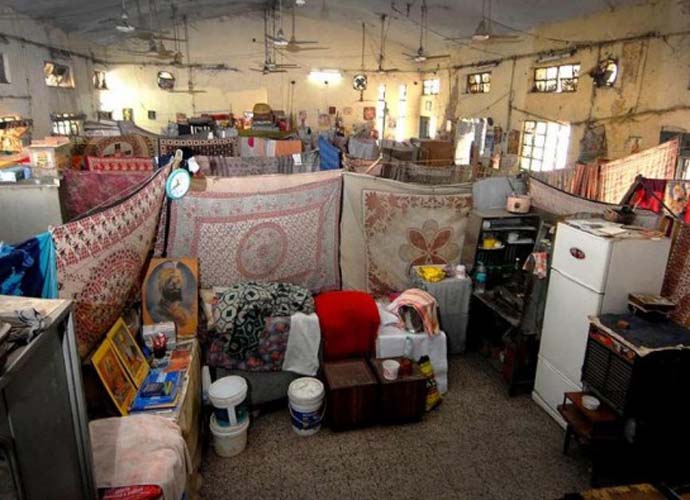 Seeking refuge suddenly: Kashmiri Pandits had to leave their homes overnight, to land in refugee camps.

Yet, that utter travesty aside, the new face of Kashmiriyat is also a clarion call.

For if Naikoo now represents Kashmiriyat, it's time we call this out for the sham it has become.

We could have done so in 2000. That was the first time the Amarnath Yatra was violently attacked. The Hizbul, which wasn't so sweetly secular then, carried out a two-hour-long shooting spree in Nunwan, killing 32, including pilgrims and several porters and shopkeepers.

And we could have certainly done so in 2017 when the Lashkar again attacked a bus carrying Amarnath pilgrims in Anantnag — Mehbooba Mufti's constituency — shooting at unarmed victims, killing eight, mostly Gujarati women. 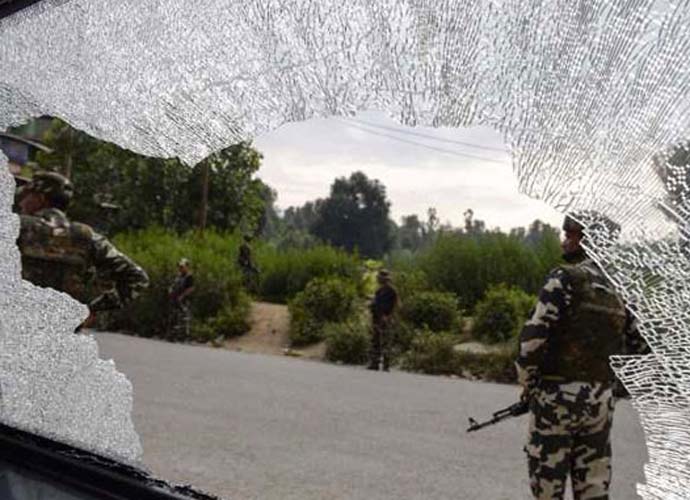 The killings, oddly, went somewhat publicly un-mourned — but India's liberals were very busy mourning the lynching of Junaid with the 'Not In My Name' protests then. So busy, they couldn't really do much more — it was monsoon, you know, and so damp and hot — for the Gujarati ladies. The ladies who wore simple cotton saris, their hair in oiled buns, sporting a little bindi, who perhaps carried with them some dalmoth from their home as they climbed a mountain to worship the simple purity of belief. The ladies who were killed on the way back by cowards who shot them in the dark, then ran. No one wept much for those ladies. Perhaps they simply weren't exotic — different — enough?

But alongside, I wondered whether something else also needed weeping for.

It sometimes feels like that. Think of the images we see increasingly from the state. Manic chaps, hatefully brandishing stones. ISIS rags fluttering in panicked breezes. Militants seeking 'Likes', brandishing their big guns online. Taking a break to go kill their own reasonable folk.

Where is that great, grand Kashmiriyat now?

Perhaps it left Kashmir when the Pandits did. Loaded onto an army truck within just one given day-night. Just one day-night, to leave the land you have been forever part of. To leave blue waters and emerald grass, drawing rooms and wooden floors, TVs in walnut cabinets and telephones placed on plastic mats, and be exiled to a refugee colony in the dust somewhere. Where, as Kashmiri Pandits wryly recount to anyone who bothers to hear them, they had to fight sudden, sharp poverty, utter ignominy, uncaring from liberals protesting for Palestine, illnesses, breakdowns, even occasional scorpions and snakes.

I cannot even imagine.

But I can imagine a frightened sprite clambering onto those trucks. A sprite called Kashmiriyat which left Kashmir.

And left it holding the rags of ISIS, the flags of the Taliban, a place where no one seemed to care much to even call an impassioned public protest when 22-year-old Thirumani, a tourist from Chennai, was killed by a stone-pelter's brutal stone.

Is that what you call Kashmiriyat?

I call it something quite different actually.

How this year's Amarnath Yatra now proceeds will give us further insight into Kashmiriyat today. Will the pilgrims be safe? Will they be welcomed? Will they be tolerated — or will they be cared for? And by caring for them, will Kashmiris care for their better selves?

Or will we conclusively see that Kashmiriyat is dead?

#Militancy in kashmir, #Sufism, #Kashmir crisis, #Amarnath Yatra
The views and opinions expressed in this article are those of the authors and do not necessarily reflect the official policy or position of DailyO.in or the India Today Group. The writers are solely responsible for any claims arising out of the contents of this article.