The state should stop giving away forest land to big business establishments.

As per various news reports, the district administration deployed 1,500 security personnel, 300 demolition labourers, eight elephants and eight excavators on the first day (November 27) of the three-day eviction drive. The power of the state was unmistakable in its deployment of armed personnel and machinery. Against this flexing of muscles, it was impossible for the people to resist. But resist they did, whether it was lying under a bulldozer or quietly walking away with a gas stove, refusing to abide by the diktats of an unfeeling welfare state. A posse of armed personnel arrive to demolish huts which forest officials claimed were illegally built at the Amchang Wildlife Sanctuary in Guwahati (Credit: Reuters photo).

In recent years, even in the time of the earlier Congress government, eviction drives in the name of freeing land from encroachers and illegal occupants was routine. The reason perhaps why Congress leaders were met with opposition when they landed in Amchang this time to extend support. These eviction drives reached their crescendo in Kaziranga last year when two residents were shot dead by the Assam Police while resisting an eviction drive. The protest was not covered well by the national media, but a subsequent BBC documentary which showed that the park was a highly militarised zone with shoot-at-sight orders was widely received, even leading to the BBC team being banned from Assam.

They, however, had made a point, the implementation of the Forest Rights Act, which places people at the heart of conservation policies, has been scarcely implemented in Assam, with Kaziranga being the worst offender. This begs the question: if the natural resources of Assam are not the wealth of its communities, who do they exactly belong to and what purpose do they serve? 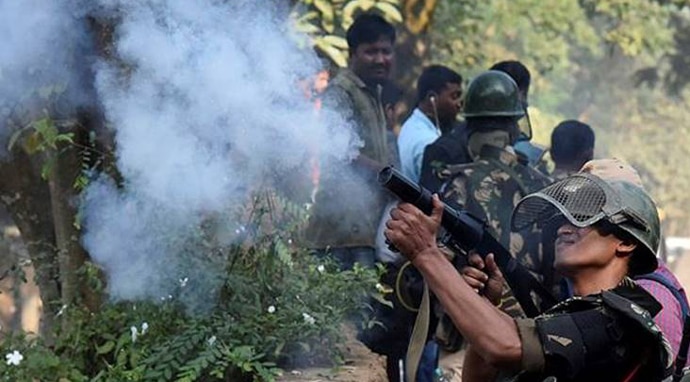 A policeman fires a teargas shell to disperse the residents (Credit: Reuters photo)

A single trip would facilitate an answer. The profusion of resorts in and around the national park point to the fact that commercial establishments are rarely touched. So, is the pristine beauty of Assam to be marketed for consumption of tourists alone while people living on the fringes of the park live in abject poverty?

Creating jobs for local entrepreneurs and boosting tourism is all very well, but if it comes at the cost of local communities, it requires a second thought. Many conservationists have supported the Amchang eviction on the ground that "nature needs to be protected". No one would contest this fact that Amchang needs to be protected. However, we need to understand that the local people of Amchang are not encroachers; they are part of revenue villages and legitimate establishments as mentioned in the central government's notification issued in the month of May 2017, declaring certain villages around Amchang as eco-sensitive zone.

Like many of us, they have come from smaller towns and villages, and built a life here painstakingly. Many of them have come from erosion-affected areas and didn’t have the luxury of choice. So, it is not only a question of rehabilitation, but of justice. To think that rehabilitation is a way to secure ecological conservation is near-sighted. There are larger questions of distributive justice and rights of indigenous communities that needs to be addressed. All over the world, indigenous communities are being swamped by globalisation and the charm of external capital. This ensures that local communities which had looked after their resources for centuries are now suddenly seen to be anti-environment. The environment should not be held as an excuse by NGOs to oust local communities. The Maoris in New Zealand are an example of a people who have been dispossessed from their natural settings as a consequence of preservationist policies in the management of nature.

The creation of national parks and sanctuaries is a recent phenomenon, but indigenous communities have lived close to nature since time immemorial. To paint them as "anti-conservation" is convenient and potentially dangerous.

Climate change and its impact on the environment in Assam has been dangerous, there are at least 2,251 villages in 299 gaon panchayats with an estimated population of 25 lakh living in the char-chapori areas (sandbars) along the river Brahmaputra. Due to the floods every year, hundreds of char-chaporis disappear every year, giving rise to a floating population who throng the nearby villages and towns in search of livelihoods. Since the chars have a majority of East Bengal-origin Muslims, they are often doubted as "illegal immigrants". Thus, the eviction drive at Sipajhar didn’t receive the widespread publicity in electronic media as the recent one at Amchang has garnered.

The delegitimising of a community on the basis of origin is another interesting point that needs to be pondered upon. No rehabilitation or compensation has so far been offered to them. Not that it makes much difference in the long run, as such measures are only a temporary balm, and as pointed out earlier, goes against the spirit of distributive justice.

So, does it mean that I advocate that the natural resources in Assam be left unprotected? Not at all, but perhaps the state can start by aiming to evict larger business establishments who primarily contribute to the mess instead of giving away large stretches of land as in the case of Patanjali, which was given acres of land in a green corridor area. A long-term goal should be drawn up to tackle climate change and subsequent dispossession by generating enough livelihoods and opportunities.

Merely skimming the surface by taking local communities hostage is no solution to an issue that is deeper than it appears. Also, a state that doesn’t fulfil its constitutional obligations doesn’t have the legal and moral right to uproot homes and hearths.

Also read: How Modi can lose future polls to land and forest laws

#Human Rights, #Assam, #Amchang Wildlife Sanctuary, #Eviction drive
The views and opinions expressed in this article are those of the authors and do not necessarily reflect the official policy or position of DailyO.in or the India Today Group. The writers are solely responsible for any claims arising out of the contents of this article.