Article 370 and the Amit Shah-Namah: Is the Home Minister's growing visibility showing us our next PM?

In his second stint, PM Modi is not speaking much. But the govt isn't quiet. Amit Shah is fast emerging as the government’s new voice.

It was customary for Prime Minister Narendra Modi to speak on every important occasion during his first stint as the Prime Minister of the world’s largest democracy. It was Modi who made it customary to speak to the nation after his finance ministers Arun Jaitley, Piyush Goyal and Niramala Sitharaman (in that order) presented the Budget, he spoke after the Balakot surgical strike before his defence minister, he also spoke when the Indian Space Research Organisation (ISRO) launched Mission Shakti in March this year, before ISRO scientists.

In his second stint, however, Modi is not speaking much.

This doesn’t mean that the government is quiet.

The government seems to be speaking more through its Home Minister Amit Shah — Modi’s most trusted aide.

So, when it came to the announcement of the abrogation of Article 370, it was Shah who became the face of the party.

Taking questions, answering accusations and putting down accusations. Yes, it is the Home Minister who is supposed to speak on matters concerning internal security — but how often was previous Home Minister Rajnath Singh seen doing that?

Shah also became the voice of the party in Parliament when it came to the debate on the Unlawful Activities (Prevention) Amendment Bill, mixing plain talk with jibes, exhibiting his oratorical skills which appear increasingly as lethal as Modi’s when it comes to taking on the opposition. Some even described the Bill as 'Amit Shah’s UAPA' — contrast this with Modi 1.0 where everything was about Modi.

All this Shah talk could well be an early sign of things to come.

Going by the age bar set by Shah and Modi on senior party leaders, by 2024 — the year in which the next General Elections are due — Modi would have turned 73. This means he would cross 75 years as Prime Minister if the BJP comes to power once again. Shah is 54 years old. By 2024, he would be 59 — well in a position to become the party’s prime ministerial candidate.

The speeches indicate that Shah is prepping for a larger role in the government. The only role larger than the Home Minister in any government is that of the Prime Minister himself.

It is, however, not just the speeches that show Shah’s role in the party and the government is expanding.

On May 23, Shah walked shoulder to shoulder with Modi after receiving the latter at the party headquarters in New Delhi as Delhi's drizzle mixed with rose petals showered upon the two leaders — the architects of the BJP's 303-seat-win in the Lok Sabha elections. 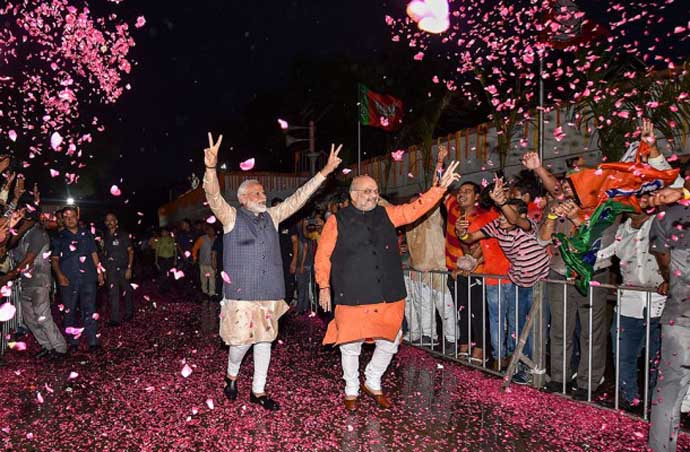 Dynamic Duo: Narendra Modi and Amit Shah at the BJP headquarters on May 23. (Photo: Reuters)

All eyes now turned to Shah as the troop build-up in Kashmir led to speculation and anxiety — there was a sense that it was Shah’s office where the action was unfolding.

Hours after the announcement, Modi has still not spoken.

There are reports that Modi will address party MPs on August 7. This is a clear deviation from the past where Modi was the first to speak or, in the case of Budget speeches, which are supposed to be made by Finance Ministers, the second one.

Modi is clearly letting Shah take centre-stage and perhaps therein lies the answer to — who after Modi?