Amnesty India is openly biased. But don't confuse it with sedition

If the Bangalore event caused a disruption of public order, it deserves to be prosecuted not under 124A, but the relevant sections of the CrPC.

India's sedition law (Section 124A) is draconian. It must go.

Treasonable offences should be treated under a new law that recognises the freedom to dissent but draws a red line where dissent crosses into incitement to violence.

Having been charged in a sedition case that lasted over 25 years for publishing a cover story that - ironically - condemned terrorism, I know how foolishly, recklessly and damagingly Section 124A is deployed.

That doesn't mean Amnesty India International, on whom sedition charges have been filed, is innocent.

It abetted a disruptive event in Bangalore on August 13. But chanting anti-India slogans should not attract a charge of sedition. In a democracy, you must have the freedom to criticise your own country as long as you don't incite violence.

Did Amnesty's event in Bangalore therefore amount to incitement to violence? Only a full investigation can answer that question.

However, the fact that the sole anti-secessionist voice at the event, RK Matoo, was not given equal time to speak about human rights violations against Kashmiri Pandits reveals the intent of the organisers.

Much meanwhile has been made of Amnesty's links with Islamist groups.

Gita Sahgal, former head of Amnesty International's gender unit, left the organisation in 2010 after accusing it of being too closely linked to a "pro-jihadi group".

In 2015, Amnesty International was accused of having "private links" with Egypt's Muslim Brotherhood which is regarded as a terrorist group by several countries.

Amnesty's director of faith and human rights, Yasmin Hussein, stayed overnight at the home of a Muslim Brotherhood advisor.

The US treasury department said it would impose sanctions on Abdul Rahman Bin Umair Al Nuaimi, a history professor in Qatar and president of Al Karama, for raising funds for al-Qaeda and its affiliates in Syria, Iraq, Somalia and Yemen that at times had amounted to millions of dollars per month.

Amnesty International acknowledged in an email that Al Karama has helped it in the past with information on cases of human rights abuse and added that it was "unable to confirm" the accuracy of the US allegations."

A pattern clearly emerges. Amnesty says it has written several letters to the Pakistan government (where it doesn't have an office) expressing concern over human rights violations in Balochistan.

But it hasn't held significant events with Baloch refugees in India, confining its anguish over Balochistan to writing letters.

It applies a wholly different standard to Kashmir, giving an empathetic platform to secessionists while sidelining victims of Pakistan-instigated violence in Kashmir - Pandits, police and soldiers.

In an op-ed in Hindustan Times on August 20, Champa Patel, South Asia director of Amnesty International, defended her organisation. 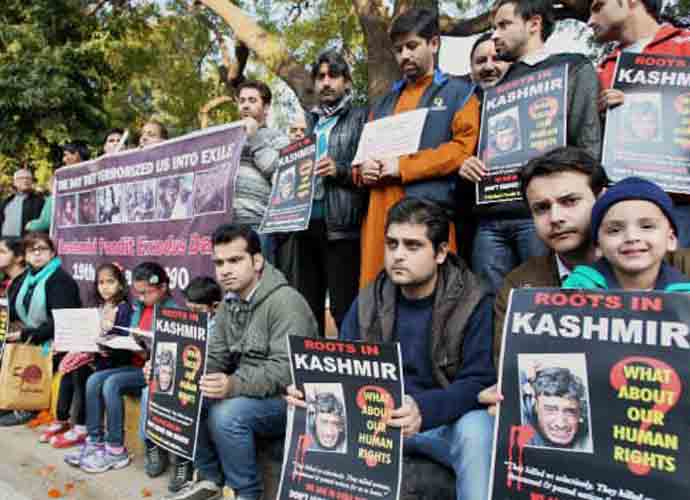 She concluded by saying: "Amnesty International always and absolutely opposes attacks by armed groups against civilians around the world. Over recent months, amid a wave of horrific and unconscionable violence, we have condemned attacks by armed groups in Afghanistan, Pakistan, Bangladesh, France, Belgium, Iraq, Syria, Jordan, Nigeria, Cameroon, Thailand and other countries." (Delicately, the op-ed does not mention the Islamic State even once.)

Patel adds that Amnesty "pointed out how the Kashmiri Pandit community has "witnessed a number of attacks by armed opposition groups that led to 'hundreds of thousands fleeing the Valley'."

But again, has Amnesty organised major events to highlight the appalling conditions in which tens of thousands of Kashmiri Pandits live in refugee camps in Jammu and Delhi 26 years after they were forced out of their homes in the Valley at gunpoint?

Nehru's amendment bill says: "The citizen's right to freedom of speech and expression… has been held by some courts to be so comprehensive as not to render a person culpable even if he advocates murder and crimes of violence. In other countries with written constitutions, freedom of speech and of the press is not regarded as debarring the state from punishing or preventing abuse of this freedom."

One of the red flags in Nehru's amendment bill was disruption of "public order".

Did Amnesty India's Bangalore event meet Nehru's definition of causing a disruption of public order? If it did, Amnesty India deserves to be prosecuted under not 124A but the relevant sections of the Criminal Procedure Code (CrPC).

Having fought and won a long drawn out sedition case brought by the home ministry against my group of publications, I don't believe NGOs like Amnesty International should be victimised despite their demonstrable bias.

A robust democracy must take in its stride criticism and even vilification as long as these don't incite violence or disrupt public order.

When they do, prosecute them under the CrPC, not 124A. India's penal code has enough teeth to deal with organisations of every stripe.

#Sedition, #Amnesty, #Amnesty International
The views and opinions expressed in this article are those of the authors and do not necessarily reflect the official policy or position of DailyO.in or the India Today Group. The writers are solely responsible for any claims arising out of the contents of this article.