IAF air-strikes: By putting the nation above petty politics, Amarinder Singh has shown he's an officer, a gentleman and a true leader

In a party where loyalty to the high command takes precedence over all else, Captain Amarinder Singh in 2015 exhibited the guts to tell Rahul Gandhi, then vice-president of the Congress, that he needed a reality check.

In doing so, the Punjab chief minister gave many a lesson in how to wear self-confidence on their sleeve. Singh not only survived in the Congress after openly taking on the party leadership — he also flourished. Amarinder Singh has never shied away from expressing himself freely, even challenging the party leadership. (Source: PTI)

Today, Amarinder Singh is teaching politicians — across party lines — how to put the country before petty politics.

Without a care for who scores any political points over the Balakot air-strikes carried out by the Indian Air Force (IAF) deep inside Pakistani territory, Singh has conveyed to party colleague Navjot Singh Sidhu that raising questions over whether the strikes killed ‘trees or terrorists’, in a snide reference to the effectiveness of the IAF operation, is totally uncalled for.

Singh said, “Whether it was one killed or 100, the message had gone out loud and clear — that India will not let the killing of its innocent soldiers and citizens go unpunished.”

While many may think that in doing so, Singh has supported the BJP’s narrative, the armed forces veteran has in fact only supported the country at a time when India is in a war-like situation with its hostile neighbour Pakistan.

Earlier, Singh won several hearts when he said that he wanted to receive the heroic Indian Air Force (IAF) Wing Commander Abhinandan Varthaman at the border on his arrival from Pakistan where, after bringing down an F-16, he was held captive. In a heartwarmingly humble tweet, Singh even asked Prime Minister Narendra Modi if he could be allowed the honour.

Dear @narendramodi ji , I’m touring the border areas of Punjab & I’m presently in Amritsar. Came to know that @pid_gov has decided to release #AbhinandanVartaman from Wagha. It will be a honour for me to go and receive him, as he and his father are alumnus of the NDA as I am.

The CM had also said the Pulwama attack by Pakistan-backed terror forces was an act of utter cowardice, necessitating retaliation by the Indian government. Speaking emotively in the Punjab Assembly, Singh had deeply appreciated the sacrifice of the Pulwama martyrs and promised the support of his state to all the families concerned, whether they hail from Punjab or not.

When it comes to matters of national security, it is imperative for the country, politicians included, to support the government and not poke holes in a narrative that needs to bind us together, not cleave us apart. That vital message has not been lost on Captain Amarinder Singh.

In any situation. Singh has had a history of holding his ground, without much care for the political consequences. Having been a friend of the late Prime Minister Rajiv Gandhi, Singh would often take Rahul Gandhi for outings whenever he visited Doon School to meet his son Raninder. But, when it came to choosing between Amarinder Singh and Partap Singh Bajwa (MP from Gurdaspur, north-western Punjab) for the Punjab Congress President’s post, Gandhi reportedly chose the latter. 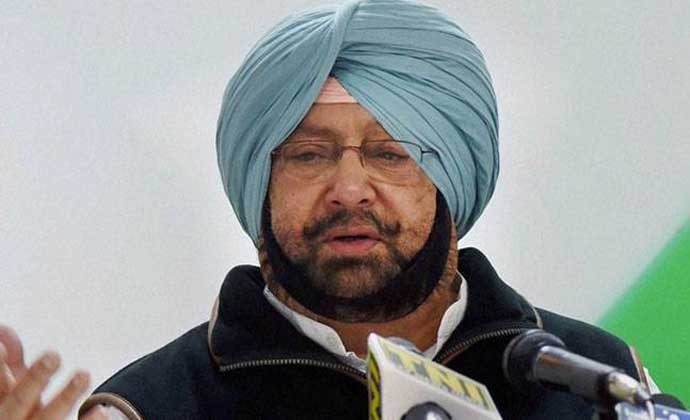 Amarinder Singh has taken hits for the Congress party. But he also knows how to fight for his own political space. (Source: India Today)

Things reportedly came to such a heated point that Singh made it clear he would not back down from his legitimate political claim — even if it meant severing his ties with the Congress party. Rahul finally had to relent, despite Singh having fought a very open battle against the party leadership, one that was splashed across newspapers and TV channels.

This doesn’t, however, mean that Singh has not honoured his friendship with Rajiv and his allegiance to the party. It is a well-known fact that Singh was against contesting from Amritsar in 2014. He even told the press that he didn’t want to contest from the seat. On March 20, 2014, he candidly said: 'I don't know anything about Amritsar. A local candidate of the party would be able to do more justice to the constituency. I will also not be able to spend the required period of time.'

But, when Sonia and Priyanka Gandhi reportedly requested him to do so, Singh agreed. He went on to defeat Arun Jaitley from the seat — signficantly, at a time when the Modi wave was sweeping most parts of the country.

Unlike politicians who perennially follow the party line, Singh had asked Sidhu to not accept the Pakistani invitation for the foundation-laying ceremony of the Kartarpur corridor, requesting Sidhu to see through the Inter-Services Intelligence (ISI) game-plan. When the whole issue blew up into a controversy, Singh clarified he had no personal quarrel with Sidhu whom he considers to be like a son. However, whether it was Kartarpur or Pulwama or Balakot, Singh has not let considerations of party line, party colleagues or party likes and dislikes come in the way of his vision for the nation, which is bigger, broader and far more encompassing than making a few petty political gains of the day.

Amarinder Singh is a Congress politician, through and through.

However, his behaviour has now set a high benchmark for how to behave like a national leader.