Fighting Phantoms: Anand Teltumbde was arrested over the Bhima Koregaon case – a celebration he strongly opposes

Teltumbde is a popular Dalit scholar, and his writings expressing disagreement with Maoists are very much in public domain.

On February 2, Dalit scholar and intellectual Anand Teltumbde was arrested from Mumbai domestic airport by the Pune police around 3:30am — very promptly after his anticipatory bail petition was rejected by Pune’s sessions court. Only, the Supreme Court had granted the activist protection from arrest till February 11. Hours later, the same sessions court declared his arrest illegal and let him walk home.

The Pune police, who booked Anand under all kinds of charges and arrested him, had to face a crisis of authority and walk away empty-handed, at least for now.

What a strange accident of history! Anand Teltumbde is a professor at IIM Goa, a scholar of repute, an empathetic activisit — and a Dalit. (Photo: YouTube)

If the state wants to arrest a person on charges as grave as unlawful assembly, conspiracy to harm the state and society by creating chaos, conspiring to create conflicts among people and harm the rulers (the alleged conspiracy to kill Prime Minister Narendra Modi) and so on, the accused and the state should at least be on opposite sides of the fence.

In this case, the state’s problem is with Maoists, who were allegedly behind the Elgar Parishad meeting organised on December 31, 2017, a day before the 200th Bhima Koregaon battle anniversary.

But Professor Anand Teltumbde, who teaches at the Indian Institute of Management, Goa, holds completely different views from Maoists and many Left-leaning intellectuals on the Bhima Koregaon issue — he is totally against celebrating the anniversary of the victory of Mahar soldiers fighting for the British over the Peshwa army.

In fact, Teltumbde didn’t even attend the event.

On January 2, 2018, he wrote this: “But when Babasaheb Ambedkar painted the Battle of Bhima Koregaon as the battle of Mahar soldiers against their caste oppression in Peshwa rule, he was creating a pure myth. As myths are required to build movements, he perhaps saw its necessity then. But after a century, when it solidifies into a quasi-history and tends to push Dalits deeper into an identitarian marshland, it should become a worrisome matter.”

Many upper caste state-supporting intellectuals, who are against Dalit politics, are wont to describe any Dalit mobilisation as an ‘identitarian marshland’. Anand Teltumbde used the terminology to claim that the celebration of the Bhima Koregaon anniversary was pushing Dalits deeper into that ‘marshland’. He went to the extent of saying that Ambedkar was creating a “pure myth” out of the battle. For this position, he was crticised not just by Maharashtra’s Mahars, but by Dalits across India — at least, by the educated ones among them. Some even abused him.

Yet, the state chose to attack his house, file an FIR, even arrest him in violation of the SC ruling.

They are reportedly showing his brother Milind Teltumbde’s presence in the leadership team of the Maoist party, and his role in the civil rights movement as the secretary of The Committee for Protection of Democratic Rights (CPDR), as ‘evidence’ of Anand’s links with the Maoists. 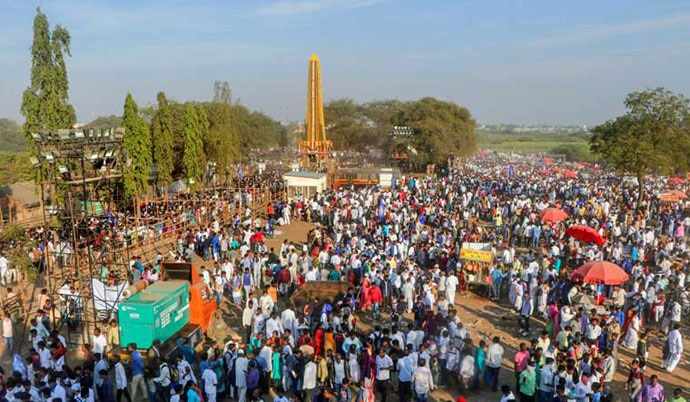 The Bhima Koregaon anniversary is a major day for Dalits. Yet, Anand Teltumbde has called this narrative of Mahar pride "pure myth". (Photo: PTI/file)

Even assuming that the Elgar Parishad meeting was organised as a ‘larger conspiracy by Maoists under the leadership of Anand’s brother to create chaos’, Anand had clearly rejected the idea of that celebration itself — he never went with that programme in any form.

Anand cannot be held responsible for his brother being in a Maoist party, which, no doubt, ideologically wants to overthrow the present system of governance. Even in mainstream politics, many family members belong to different parties and different ideologies.

Neither in his writings, nor in his actions has Anand shown a complete agreement with the Maoist understanding. In his books, he critiques their understanding of the present state and its capacity, as against the Maoists party’s capacity to wage a revolution.

Yes, he was working with civil rights movements — but that cause is about standing up for ordinary people when their rights are violated by the state, landlords, upper castes, or even by other marginalised groups. Human rights activism has not started with the Naxalite or Maoist movement, though there are sympathisers of that movement in the human rights movement. It started with John Locke and Thomas Paine, who were pre-Marxists.

The current regime tends to see supporters of human rights as troublemakers, as evident from the attacks on Amnesty International, whose Indian chapter president is well-known journalist Aakar Patel. The RSS and the BJP traditionally do not believe in equal rights for all. None of their intellectuals seem to work in human rights organisations. They apparently in fact have a deep discomfort with those who work in any human rights organisation. Yet, they say they believe in democracy.

The Indian judiciary must understand this contradiction in the very belief structure of this ruling political force. Our Constitution is a document of human rights. Agitating for human rights thus can never be unconstitutional. (Photo: Wikimedia Commons)

The first formal Constitution of the world — the American Constitution — is premised on the idea of ‘The Rights of Man’ of Thomas Paine. Without constantly engaging with the notion of human rights, no democracy survives.

Any human rights activist has to function with the framework of the Constitution and judiciary — Anand is doing only that.

For Anand Teltumbde, his own community’s untouchable existence is an issue of human rights.

They never recognised Amedkar, the father of our Constitution, as a thinker like Marx and Mao.

But Anand Teltumbde is an Amedkarite with his own mind. As a Dalit born in a poor family, he lived through untouchability himself. Amedkar’s Constitution did not abolish untouchability, as it was not allowed to work the way it was meant to. This, perhaps, turned Anand into a human rights activist. 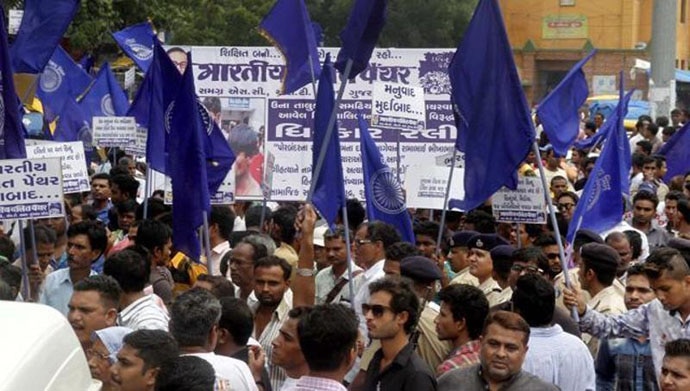 Anand Teltumbde understands Maoists are not the champions Dalits need for they don't see caste as the violation that it is. (Photo: PTI/file)

I do not know any other IIT or IIM professor coming from a Dalit family of Anand’s brilliance, and as committed to the Dalit-Ambedkarite cause as he is. But for his sensitive and thinking mind, he could not have written what he has in the realm of social sciences, for the cause of Dalits and Ambedkarism.

I disagree with him on many counts, but I will defend him to the end of my life.

That is what the position of human rights defence is in this land of India — I am not in the land of Voltaire, who proposed that idea.

What is surprising in this case is that the state is linking Anand to serious charges, including reportedly plotting the assassination of the Prime Minister. Anand is a popular public intellectual, and with so much of writing in the public domain, his disagreements with many shades of ideologies — including that of Maoists — is well-known.

I hope the Indian judiciary, in whose credibility the system of democracy, the Constitution and the idea of human rights survive, sees through this kind of conspiracy, and allows Anand Teltumbde to teach and write, as he has been doing.

Also read: We are all dissenters now: Anand Teltumbde's arrest shows all social voices being suppressed