From smartphones for every family to cars for Brahmins, it’s sop season in Andhra Pradesh

Chandrababu Naidu is fighting a resurgent Opposition and estranged allies in a desperate bid to retain power.

With both the General Elections and the Assembly polls coming close in Andhra Pradesh, the political battle is turning interesting as the governing Telugu Desam Party (TDP) pulls out all stops to retain power.

When Chandrababu Naidu came to power in 2014, he was an NDA partner and had the strong backing of the Jana Sena, the party of actor-turned-politician Pawan Kalyan.

But, in the last four and a half years, a lot has changed.

Naidu has walked out of the NDA — and Pawan Kalyan has also parted ways with the TDP. 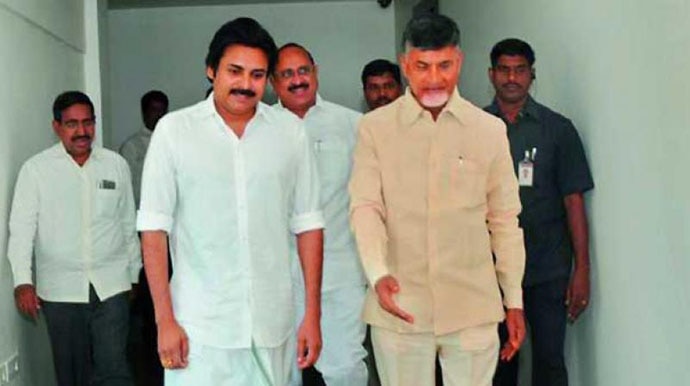 Once together, now apart: Chandrababu Naidu and Pawan Kalyan have parted ways since 2014. (Photo: Twitter)

Pawan Kalyan belongs to the influential Kapu community, which has a significant 27 per cent population in the state. The actor, popularly called ‘Power Star’, enjoys a massive fan following across castes and creeds in the state.

The principal Opposition party, the YSR Congress, is also giving Naidu sleepless nights. Party chief YS Jagan Mohan Reddy has conducted a 15-month ‘padayatra’, traversing over 3,000 km across all 175 constituencies of the state.

Facing a two-front challenge, Naidu has been forced to look for new ways to woo the electorate — and the Chief Minister seems to have turned towards populism.

Last year, the government rolled out the NTR rural housing scheme, which aims to provide around 20 lakh houses to the poor. The Chandranna Beema scheme is meant to provide relief to the families of unorganised workers in case of death or disability.

In addition, the government has decided to provide Swift Dzire Tour cars to unemployed Brahmin youth under a self-employment programme.

In the first phase, 50 cars have been sanctioned. YS Jagan Mohan Reddy has conducted a 15-month ‘padayatra’, traversing over 3,000 km across all 175 constituencies of the state. (Photo: PTI/file)

The CM also plans to distribute smartphones to every family ‘for ease of living’, for which he wants 14 million phones to be manufactured.

Naidu recently faced a stunning defeat in Telangana, where his party contested the election as part of the Congress-led 'grand alliance' Praja Kutami.

The TDP chief, who claims to be the ‘senior-most’ politician of the country, knows he can afford losing Telangana, or even in the Parliamentary polls — but he can’t lose his home turf.

That will not only put him out of power in the state, but also demolish hopes of the ‘anti-Modi front’ he is trying to build.

Perhaps, most importantly, the defeat will dash the chances of making his son and state IT Minister Nara Lokesh the future chief minister of Andhra Pradesh.

#Pawan Kalyan, #Ys jagan mohan reddy, #Chandrababu Naidu, #Andhra pradesh elections
The views and opinions expressed in this article are those of the authors and do not necessarily reflect the official policy or position of DailyO.in or the India Today Group. The writers are solely responsible for any claims arising out of the contents of this article.