Drawing political capital from the overwhelming optics in observing the day-long dharma porata deeksha, a dawn-to-dusk hunger strike, in Vijayawada on April 20, and again in the temple town of Tirupati on April 30, Andhra Pradesh chief minister N Chandrababu Naidu is getting his Telugu Desam Party to take it forward as a sustained campaign.

The well-orchestrated drama accusing the BJP and Prime Minister Narendra Modi of "betrayal" is to be staged at monthly intervals in district after district in the run-up to the next Assembly elections just a year away.

It is expected to ensure momentum and gear up the TDP cadre for the general elections, considering the Assembly poll will be held simultaneously with that for the Lok Sabha. To set the tone the next rally will be organised in the port city of Visakhapatnam soon. It will conclude with a public meeting and the culmination of the series will be a mammoth gathering in the state capital Amaravati.

Evidently, blowing the election bugle, Naidu made it clear to party leaders that complacency and negligence would not be tolerated. “I am not ready to pay for your mistakes. The people would respond and react in their way to our actions and deeds. Be watchful of what you do,” he cautioned senior party leaders at a recent coordination committee meeting that devised plans and programmes to focus on how the state got a raw deal from the central government despite being a part of the NDA.

Naidu was confident that people were positive about his government, governance and its policies. “I have utmost satisfaction that the work and development that has taken place in the last four years doesn’t have a rival in any development in 40 years of my public life,” said Naidu, hopeful of it giving a head start to the TDP in the next elections.

His game plan is to repeatedly accuse the central government of failing the state on several counts including the refusal to grant special category status, post-bifurcation in 2014, poor financial incentives and meagre support in building the green field capital Amaravati. 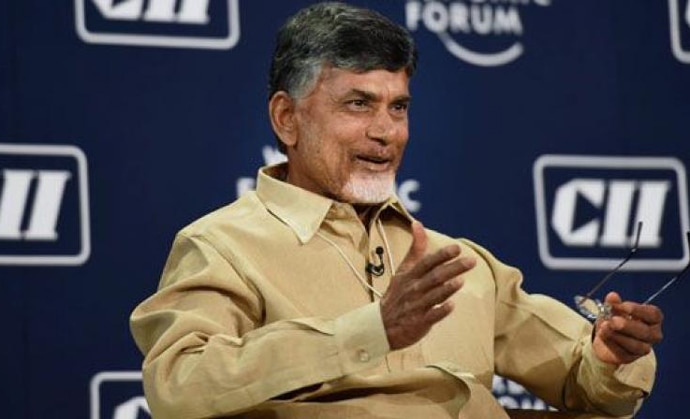 Arch rival YSR Congress has accused Naidu of failing on all counts and focusing on the SCS issue to cover up his wrong doings. “The chief minister is involved in corruption amounting to over Rs 3 lakh crore and I will never take rest until Chandrababu Naidu was sent to jail,” said the senior YSR Congress leader V Vijayasai Reddy, who plans to place all evidence before the Prime Minister.

His party president YS Jaganmohan Reddy, on apraja sankalpa yatra across the state, is to complete traversing through 2,000 km on May 14.

Jagan is — at well-attended meetings on his yatra — accusing Naidu of failing the state by mismanaging administration with misplaced priorities. Though facing trial on charges of financial misdemeanor in a slew of cases (which forces him to cut short his yatra to present himself in court on Fridays in Hyderabad) Jagan is optimistic about dislodging the TDP "by calling Naidu’s bluff on the SCS."

Other trenchant critics, including the first chief secretary of the state, post-bifurcation, IYR Krishna Rao have accused Naidu of misleading people on SCS. “The state government should reveal facts and the correspondence it had with the Centre. It is trying to project SCS as the critical issue when it is well aware that SCS does not exist anymore. Under the SCS, which is scheme specific, Andhra Pradesh itself had admitted it may not be able to draw more than Rs 5,000 crore in a five year period, whereas the special package offered by the Centre provides the flexibility of accessing up to Rs 16,447 crore, as calculated by the state government itself,” reasoned Rao, about political considerations rather than interests of state being at play.

Naidu is equally aware about this and will not give in. The SCS campaign is a handy tool for motivating his party rank and file in trying to win a second term in a row. “A leader should have commitment and do hard work to taste success. A successful leader can win even if the party is weak,” said the TDP chief, exhorting the cadre to put their best foot forward in seeking people support.

His use of analytics to gauge the mood has shown he has done wonders so far. People’s satisfaction rose from 67 per cent in March to 73 per cent in April in the campaign against BJP. The TDP chief believes he is on the right track glossing over the imponderables that a party in power does not fathom easily.

Also read: Why it's important to celebrate Tipu Sultan's heroism today, more than ever