Woman offered as prize for Jallikattu: Why our 'culture' fails women and animals

Research has shown that the passion for abusing women stems from the abuse of animals.

As the second week of January draws to a close, deaths associated with Jallikattu are becoming a common phenomenon, with the news of a 19-year-old spectator being “gored to death” and more coming along. Besides protesting over everything on the basis of “culture”, another trend seems to be the growing absurdity in the kind of awards offered to the victorious “male”. This year, veshtis (the traditional garment worn by men) — handed out as rewards at the event — seem to have been replaced with women.

A supposedly drunk announcer declared that a 21-year-old woman would be offered as a prize to the winner of a mega Jallikattu event at Tamil Nadu’s Periya Anaikaraipatti village. If that does not make you question the foundation of our society and the so-called “culture” that we are harping about, nothing will. Jallikattu is a medieval bull-wrestling sport that originated in the Sangam period (around 3rd century BC to 4th century AD).

This sport, played mostly by the upper castes, gave the winner the right to claim the alpha male’s position in the local community and a chance to wed the woman of his choice. 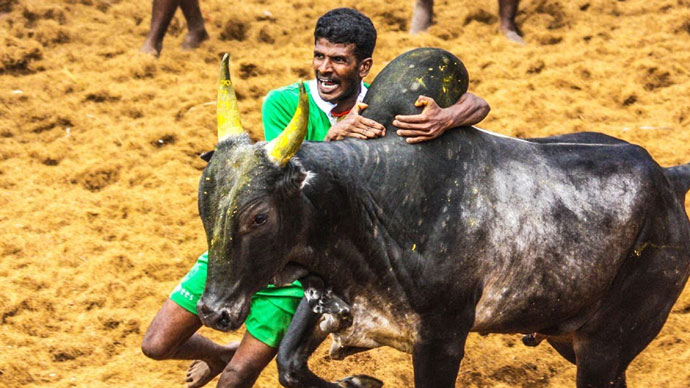 Similarly, if the human bull made the conquest, he too would have his way with the women.

The ancient society was untouched by the perils of social media and matrimonial sites. If the bull survived the mauling by the male in the arena, it acquired the status of the alpha bull and was used to impregnate the local cows on the pretext of breed superiority.

Similarly, if the human bull made the conquest, he too would have his way with the women. So, the woman had no say or respect and was positioned somewhere below the man and the bull for making the biggest decision of her life — that of marriage and rearing the next lot of humans.

As a woman living in India, I am appalled at the issues we are putting our weight behind today. Fighting for upholding Jallikatu and positioning it as our culture without understanding the deterioration it causes is plain absurd. Should we not be putting more effort in order to move ahead and adopt ideas that are aimed at changing the world and making it a better place for all irrespective of their species and gender?

Campaigns like #Metoo that spoke against abuse, harassment, violence and threats had practically every woman in India posting on social media about her experience. And, Project Unbreakable, aimed at highlighting the voice of survivors of sexual assault, domestic violence, and child abuse received tremendous support across the world and in India.

Yet, these movements seem to have failed to make an impact where it really matters: on our capacity to think and empathise with those who matter. Or, is the wave that sways us more than what meets the eye?

Perhaps, we have become too obsessed with trying to ride the wave, failing to differentiate between the path we want to take to better ourselves and our society. Today, other than the newspapers, not even one vociferous celebrity supporter of Jallikattu spoke about the injury, death or shameless exhibition of misogyny at the events held in the past couple of days.

It also makes me wonder where all the celebrities and leaders who were fighting for the “truth”, for the sake of a Rajput queen are.

Perhaps it is not in our culture to respect women and to ensure that those “outraging their modesty” are punished. History has proven this time and again. What about the families of those who have succumbed to gruesome injuries? Should no one take responsibility for their deaths?

Does history have to repeat itself with a decade-long case like A Nagaraja versus Union of India before we learn our lesson and see the futility in a practice like this?

Research has shown that the passion for abusing women stems from the abuse of animals — ignored or unnoticed. The “pride”, it seems, stems from a deeper displaced need to justify power, which inevitably turns into cruelty — supported by a stream of primitive ideas and thought process — rather than the celebration of a breed itself.

Unfortunately, animals and women have been victims of politics irrespective of caste, creed or religion — and it hasn’t been more apparent on any other day.

In a country that saw thousands of young, passionate people protest at a beach for more than a week in 2017 to bring back a cruel, futile event for the sake of culture, not a word was said when a woman was marketed like a commodity for a testosterone-driven male, who could, wonder of wonders, hang on to the hump of a bull!

If this silence and discrimination and stupidity is my culture and tradition, I don't want to be part of this vicious tradition. I used to laugh it off when my colleague used to say this, but today, I concede, we have failed the strongest pillars of the country: its women and its animals.

We are a failed nation.

Post your comment
#Masculinity, #Tamil Nadu, #Jallikattu
The views and opinions expressed in this article are those of the authors and do not necessarily reflect the official policy or position of DailyO.in or the India Today Group. The writers are solely responsible for any claims arising out of the contents of this article.

The writer is an animal welfare advocate and the deputy director of Humane Society International/India.