The sad politicking that went behind new anti-trafficking draft bill

The government has maintained that this law must focus on human trafficking, including sex trafficking, but is not a law on prostitution or sex work.

The Trafficking in Persons (Prevention) Bill, 2016 has been at the centre of much debate and deliberation in India over the last year.

The Union Cabinet minister for ministry of women and child development, Maneka Gandhi, released the first draft of the bill on May 30, 2016, calling for responses and suggestions from civil society and all stakeholders, including governments of all states of India, to improve the draft.

This draft, which had been developed by an inter-ministerial committee, comprising of ministries of home affairs, labour, law, health and family welfare, National Commission for Women and four human rights activists including Ajeet Singh, Sunita Krishnan, Ravi Kant and Roop Sen, was widely criticised for its incompleteness.

However, the enthusiastic responses from a wide range of stakeholders, including state governments, and one group of survivors of human trafficking from West Bengal, all analysing the strengths and weaknesses of the draft bill, and offering suggestions and recommendations to strengthen it, led to eight more drafts between June and October in 2016, each draft improving upon its previous draft.

Dr PM Nair’s role in supporting the government to develop the drafts, while consulting with practitioners, researchers and survivors of human trafficking has been an undeniable resource to the ministry of women and child development.

In recent weeks, Gandhi has promised all efforts to place the bill in Parliament in the winter session slated from November 15 to December 16, 2016. As those who have been involved in developing this bill await with bated breath for it to be placed in Parliament and hope it is passed by the law makers of India, there are detractors also who have been remained critical about it.

Some have questioned the need for such a law, when there are existing provisions in the Indian Penal Code – especially section 370 of the IPC, and other existing laws, such as Immoral Traffic Prevention Act, Child Labour Prevention Act, Bonded Labour Act and Child Marriage Restraint Act.

Some sex workers’ groups have voiced their concerns that this law criminalises sex work, as does the existing Immoral Traffic Prevention Act.  Others have claimed that the law relies too heavily on the criminal justice system in addressing what is a socio-economic problem. 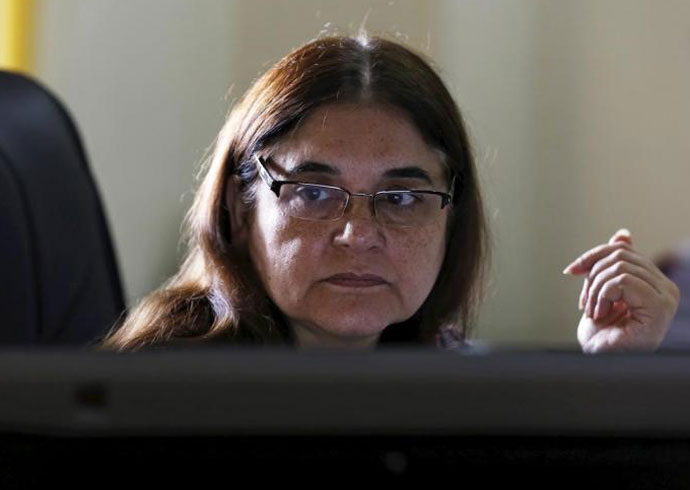 In recent weeks, Maneka Gandhi has promised all efforts to place the bill in Parliament in the winter session. (Photo: Reuters)

Others have simply expressed their apprehensions that this law will become a burden on an already confused law enforcement system and is likely to fail, and all investments made towards its making and enforcement will fail to deter human trafficking and exploitation of trafficked persons.

Underlying the support or opposition to the bill are several unstated interests of different groups, ideological differences and even rivalries between activists with competing ambitions.

The support for the bill seems to have come from organisations and human rights activists who have seen value in building a comprehensive bill on human trafficking, and replace the Immoral Traffic Prevention Act, 1956, that conflates human trafficking with commercial sexual exploitation, and sex work with prostitution.

The committee that had decided to frame this law took the suggestion for legal reform from a report from the National Legal Services Authority, a committee under Justice Sikri, that had been mandated by the Supreme Court of India to research on existing systems and its effectiveness in preventing human trafficking and offer recommendations for systems reform.

The committee had found that the Bonded Labour Act, The Child Labour Act, The Child Marriage Prevention Act focus on bonded labour, child labour or child marriage respectively, but do not have enough provisions to address trafficking – that involves a series of crimes – recruitment, transportation, sale and buying of persons, committed across different states of India or across international borders.

It also observed that while Section 370 of the IPC has valuably incorporated a definition of human trafficking in Indian law for all sexual exploitation and slavery for labour, this law in itself proves to be inadequate to provide adequate support to the criminal justice system for investigation and prosecution, or ensure justice to victims of human trafficking.

A special act has certain advantages on presumption of guilt which are critical for the prosecution in cases of organised crime which do not apply to laws in the penal code. Further, the committee recognised the need for a law that unambiguously asserts rights to victims of trafficking to rehabilitation services, specific health services for their diagnosis and recovery from trauma, rights to compensation and independent legal representation for the protection of their interests and rights.

The other contesting groups include anti-prostitution activists, who opposed the making of this law, because they feel that a common law for labour trafficking and sex trafficking (and all forms of trafficking) will take away attention and focus from prostitution or commercial sexual exploitation of women and children.

On the other hand, pro-sex work groups (activists who fight for legalisation of prostitution) have been concerned about how this law criminalises brothel keeping, pimping and other prostitution related activities, as is already there in the Immoral Traffic Prevention Act.

The government has steadfastly maintained that this law must focus on human trafficking, including sex trafficking, but is not a law on prostitution or sex work.

It has been interesting to note that there has been no communication or negotiation between the ideologically differing groups. What may have been an opportunity to have worked on the draft bill collaboratively became a shout from each of these groups with conflicting opinions, each hoping to outdo the other.

There is perhaps mistrust of each other, fear of being sabotaged and stubbornness to protect onto one’s ideology with deafness – any listening to the other poses a threat to one’s defeat, submission or one’s ideology getting corrupted or diluted. Not very different from any of the other political discourses in India and across the world, is it?

Post your comment
#Maneka Gandhi, #Prostitution, #Human Trafficking
The views and opinions expressed in this article are those of the authors and do not necessarily reflect the official policy or position of DailyO.in or the India Today Group. The writers are solely responsible for any claims arising out of the contents of this article.

The author is a researcher on trafficking and co-founder of Kolkata-based non-profit organisation, Sanjog India