Anurag Thakur: BJP, unlike Congress, does not believe in pushing one face, one family. But NaMo represents welfare to countless many

Anurag Thakur is one of the younger leaders of the BJP, fighting hard in his Hamirpur, Himachal Pradesh constituency. Heading to the polls on Sunday, Thakur spoke with Vandana about development, NaMo and ageism in politics.

With just four seats in its kitty, the hill state of Himachal Pradesh may have so far remained ignored in the larger political discourse of national politics.

Even the fact that all its four seats go to the polls in the seventh and last phase of the 2019 Lok Sabha elections on May 19 has caused little attention to have been paid to the state known for its breathtakingly beautiful landscape. 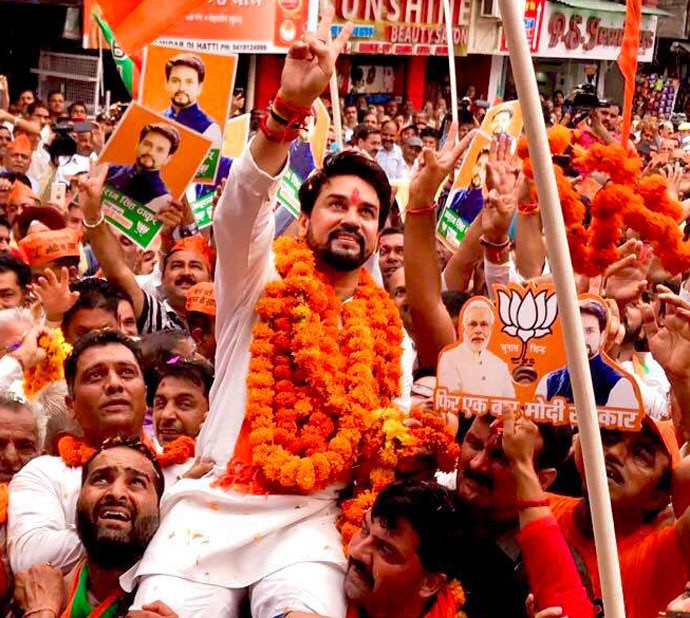 But one political player has been busy preparing the political pitch by talking of development and Narendra Modi’s leadership, far away from the national media glare. Forty-four-year old Anurag Thakur is reaching out to his voters with highly innovative new tools — Thakur is attracting voters in Hamirpur with 3D Mobile Fan Hologram Technology, which, his team claims, is a first in the world, along with LED translide and battery-operated helium balloons.

The tech push is in fact helping the BJP attract the attention of voters deep into the rural belts of the constituency. 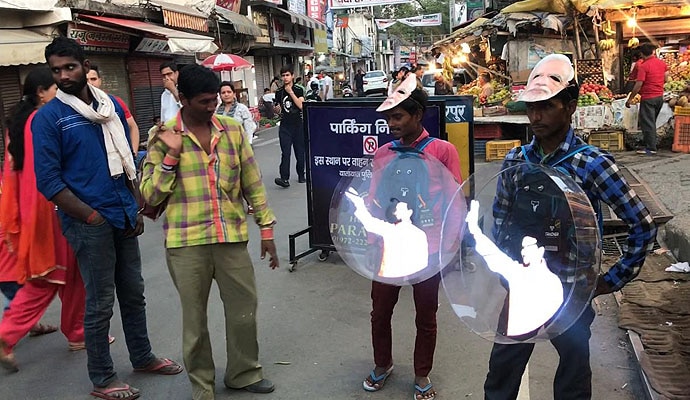 Being a young leader, Thakur is known to take risks and push the envelope in politics. He was an early starter in the BJP’s poll campaign — walking into Parliament in a NaMo hoodie in January, sparking talks around Modi’s popularity.

In an interaction with DailyO, when asked if the use of NaMo merchandise was not the projection of one man as the face of the party — something the Rashtriya Swayamsevak Sangh (RSS) has fervently been against — Thakur said, “Under the able leadership of PM Modi, people from all walks of life, every household in fact has benefited immensely. The country at large has reaped benefits of the pro-people and pro-development approach of this government. By wearing my NaMo hoodie, I reiterated the popularity PM Modi enjoys among the public, owing to the tangible work undertaken... There isn’t one particular face or family that defines our party. That is Congress’ ideology.” Was this the start of 'Doosri Baar?': Anurag Thakur walks into Parliament wearing a Namo hoodie. (Source: PTI)

“Nation first, party next and self last is the ideology of the BJP. NaMo is not just some merchandise that I wore — it is a reflection of the emotion and the sentiment that the country shares and the attitude that has today made each one of us stand tall,” he adds.

Thakur, who first contested the Lok Sabha by-election to this constituency in 2008, has won every election to the lower house since. In Parliament and outside it, Thakur has been a known face of the party and remains vocal about causes the BJP espouses.

Thakur has been pretty acerbic in his attacks on Rahul Gandhi too.

Asked why he is so against the Congress president, Thakur said, “I have nothing personal against anyone till their act is in the interests of the public and country. I have friends across party lines — our ideologies may not match and we may have different opinions but if the intent is correct, then there is no confrontation.”

With the country witnessing an extremely vitriolic poll campaign that has blurred the lines between personal and professional, when asked if it was right for PM Modi to drag former PM Rajiv Gandhi into the campaign, Thakur said, “Do you think it is right to call the Prime Minister ‘chor’ despite being reprimanded by the Supreme Court? What is your take on freedom fighters like Veer Savarkar being disrespected by the Congress party?”

“Modi ji didn’t make up any story in the name of Shri Rajiv Gandhi, he only stated the facts,” Thakur emphasises.

Talking about his direct rival in Hamirpur, Congress candidate Ram Lal Thakur, the BJP candidate enlisted the work done for the region. “Hamirpur is a robust constituency that has some key projects such as the state’s first AIIMS in Bilaspur, the Indian Institute of Information Technology, two medical colleges, a central university, Hydro Engineering College, a technical university, five Kendriya Vidyalays, three sanctioned railway lines from Una to Hamirpur, Bhanupali to Bilaspur and Nangal–Una–Talwara, the recent extension of Himachal Express between Delhi and Daulatpur Chowk besides 25 national highways... When the Congress government was in power in the state, they took every possible step to halt the progress of projects targeted towards the welfare of the people.”

Thakur says it is the work done in Hamirpur by the BJP government which made the Congress nervous and that is why the party apparently took time to announce RL Thakur’s candidature.

Thakur, who won his entry into the Lok Sabha at the young age of 33, doesn’t agree that senior party leaders such as LK Advani and Murli Manohar Joshi have been sidelined in the BJP. Was it their choice? Anurag Thakur says LK Advani and Murli Manohar Joshi chose to step back to give others an opportunity. (Source: Reuters)

“Who says so? Sh LK Advani and Sh Murli Manohar Joshi are eminent and highly respected leaders who have contributed immensely towards the organisation. It was a conscious decision at their own end to step back and give others the opportunity. The BJP is a holistic party that believes in giving every deserving candidate a chance to serve society — unlike the Congress which believes in keeping all powers vested with a single family.”

Asked about what his government has to actually show in its report card on providing job opportunities, Thakur, who has been the chief of the BJP’s youth wing, said: “The BJP government led by PM Modi has undertaken various initiatives for the welfare of the youth and provided them with various opportunities... Skill India alone has provided training to 10 million people every year free of cost. At the same time, the Start Up India programme has done extremely well. India today is pegged in the top five among most start-up-friendly nations... In the last five years, there has been a surge in the number of entrepreneurs. Under Pradhan Mantri Mudra Yojana, loans have been provided to over 165 million people, out of which 50 million are new entrants on the block who have taken loans for the first time. If these many people have taken loans to start their business projects, they would have definitely hired 1 to 10 people. This number would go beyond 100 million. There are the numbers for you.”

Thakur, who has been the Board of Control for Cricket in India (BCCI) president, says that being an avid sports lover as well, he has done a lot for games. “I went ahead and built Himachal Pradesh Cricket Association Stadium Dharamshala, considered one of the most beautiful stadiums in the world,” he claims.

On the question of whether he would ever want to return to BCCI, Thakur, who has been a Ranji player himself, smiles. He only says quietly now, “I will be available for the BCCI if Indian cricket needs my services.”

#Lok Sabha elections 2019, #Hamirpur, #BJP, #Anurag Thakur
The views and opinions expressed in this article are those of the authors and do not necessarily reflect the official policy or position of DailyO.in or the India Today Group. The writers are solely responsible for any claims arising out of the contents of this article.