The run-up to 2019 Lok Sabha elections is throwing up extraordinary scenes.

With the Assembly polls in five states inching closer and the countdown for 2019 Lok Sabha elections beginning, extraordinary scenes are being witnessed in Bhopal and Indore, indicating how the Congress and the BJP are trying to package inclusiveness in their electoral campaign.

Scene 1: Blowing of shankh (conch) by 11 priests, girls lined up for kanya puja, chanting of mantras and a whole lot of rituals at Vishwakarma temple, Lal Ghati, in Madhya Pradesh's capital city, Bhopal, had trappings of a religious ceremony. Except that on Monday afternoon, it was not.

A Shiv bhakt walked in performing elaborate puja and talking with religious fervour about how a pilgrimage at Kailash-Mansarovar has transformed him. The cut-outs and hoardings of a tilakdhari Rahul Gandhi in Bhopal had a 'Shiv bhakt'. 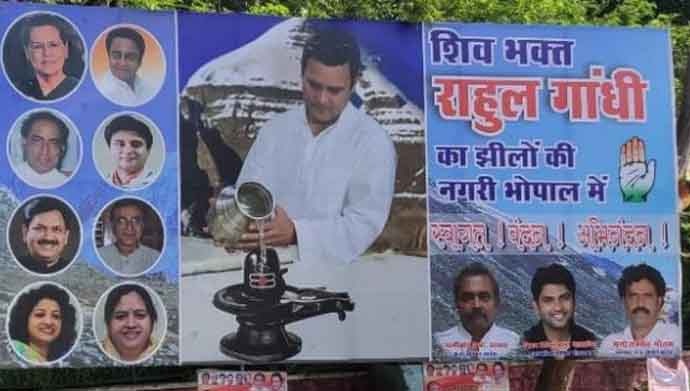 The new bhakt on the block: A poster of Rahul Gandhi in Bhopal. (Credit: Twitter)

The martyrdom of Imam Husain is a painful but significant event in the history of Islam. Husain had opposed the crowning of Yazeed ibn Mu’awiah as Islamic Caliph, refusing to accept his leadership, or endorse coercive methods. Husain and his band of loyalists, including many blood relatives of Prophet Mohammad, sacrificed their life to uphold democratic principles and values. For Rahul, a pronounced proximity to Hindu faith is important, as it may dispel the BJP's propaganda that the Congress under Gandhis, or more precisely, during the 10 years of UPA rule between 2004-2014, had only bothered to care about Muslims — be it the UPA affidavit on the Ram Setu issue, when the Centre had told the Supreme Court that Valmiki’s account of Lord Rama lacked scientific and historical veracity, or former prime minister Manmohan Singh’s declaration that minorities had the first right on national resources.

In any case, the Congress' obsession with religion, particularly the flaunting of proximity to the majority community, is nothing new. In 1989, then-prime minister Rajiv Gandhi had launched his Lok Sabha campaign on the banks of river Saryu in Ayodhya, promising 'Ram Rajya'. Rajiv and his home minister Buta Singh had even performed "Shilanyas" there. In fact, throughout the 1986-89 period, the Congress chief ministers of Uttar Pradesh, Veer Bahadur Singh and ND Tiwari, remained active in the competitive programme of "occupying Ayodhya centre stage".

Time and again, these individuals came forward with the "Rajiv formula" and "Tiwari plan" and "Shilanyas" to pave the way for the construction of a Ram temple in Ayodhya. Somehow, each of these measures boomeranged. Rajiv lost the 1989 election, handing over power to a VP Singh-led coalition that had the support of both the BJP and the Left. Ram temple: In 1989, Rajiv Gandhi had launched and his home minister Buta Singh had performed Shilanyas in Ayodhya. (Credit: Twitter)

Even a cursory look at state Assembly polls in Madhya Pradesh would show that the entire election revolves around the performance or non-performance of incumbent chief minister Shivraj Singh Chouhan, particularly when he has to account for 13 consecutive years of rule.

Chouhan is vulnerable on many counts, such as the ever-growing crime rate, particularly in terms of crimes against women and children. Multi-crore jobs and professional examination racket — Vyapam scam — robbed thousands of youngsters their legitimate place in medical colleges, government jobs etc. A recently unearthed e-tender scam reportedly had a criminal nexus between contractors and bureaucrats that thrived at the expense of genuine entrepreneurs and businesspersons. Madhya Pradesh has had a rather disturbing track record of corruption in the health sector, where three heads of health department were jailed.

There is seething anger against Chouhan over recent amendments in the Scheduled Caste and Scheduled Tribe (Prevention of Atrocities) Act. The influential upper castes, already opposed to reservation in promotion of government employees belonging to the scheduled caste and tribes, are exercised over central government's decision to changes in the SC-ST Act that rules out any provision for anticipatory bail for a person accused of atrocities against people from SC or ST communities.

Agriculture is Madhya Pradesh's lifeline as three-fourth of the population is dependent on agriculture or agro-related activities, wherein farmers unrest and dissatisfaction is rather visible. Poll ready: Many believe Rahul Gandhi's religious posturing is aimed at tackling a political situation if the SC delivers its verdict on the Ayodhya dispute. (Credit: India Today)

But the Rahul-led Congress does not want to leave anything to chance. Rahul Gandhi is also planning to make more foreys in religious places. On September 27, he is expected to tour Satna and Rewa districts of Madhya Pradesh and pay his respects at Chitrakoot and Kamtanath temples. This region sends 48 MLAs to the 230-member state Assembly.

The religious package is perhaps aimed at tackling a political situation if the Supreme Court delivers its verdict on the Ram Janmabhoomi-Babri Masjid dispute case that has a potential of huge political ramifications.

If Rahul is using religious identity as part of the Congress’ defence mechanism, Prime Minister Modi is not leaving anything to chance. The Prime Minister’s warmth towards Bohra community, is a broad signal to every voter across the country that inclusiveness is integral part of Modi’s vision.

In this sense, Modi’s presence at Saifee mosque is not so much about courting Bohra Muslim voters but more in sync with "Sabka Saath, Sabka Vikas" theme. Horrible incidents of mob-lynching, cow vigilante, hate crimes may have provided ammunition to the Opposition campaign, but the Modi-led BJP plans to sell a counter narrative where government scholarships for minorities had quantum leap and Muslim percentage in government jobs went up significantly.

The million-dollar question remains if voters in November 2018 and in May 2019 would buy the inclusiveness plank offered by a Shiv bhakt Rahul Gandhi or a mosque-visiting Narendra Modi.

#Madhya Pradesh Assembly elections, #Modi, #Rahul Gandhi, #Lok Sabha elections 2019
The views and opinions expressed in this article are those of the authors and do not necessarily reflect the official policy or position of DailyO.in or the India Today Group. The writers are solely responsible for any claims arising out of the contents of this article.