I hope the Times Now anchor's hypocrisy does not go unnoticed.

"You take the alleged perpetrators' point of view, and you circulate it; he gives you a piece of footage, which means there is a powerful campaign which is happening in Delhi to influence minds, to put pressure on a due legal process by transmitting footage and building opinion against the victim…this alone should count as double offence."  - Arnab Goswami 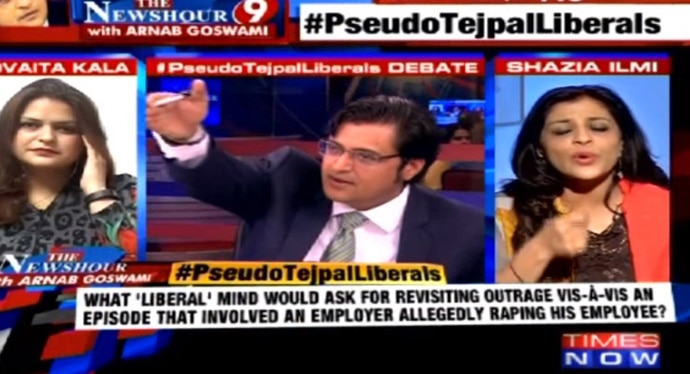 Why, Mr Goswami, could the video be doctored, as you would know in your veteran years of journalism?

This allegation made against the liberal - pardon me, "pseudo liberal"-brigade by Arnab Goswami is self-revealing because it matches closely what happened on his show in his channel "transmitting footage and building opinion against the victim" in the JNU controversy to "put pressure on a due legal process" in Kanhaiya Kumar's case.

Goswami's words come mere minutes after he finishes expressing his shock that Shazia Ilmi had "incalculable" faith in a piece of video-footage she had seen of the CCTV presented in court by Tarun Tejpal's lawyers in his defence, and which shows footage of the victim stepping out of the elevator where she had claimed Tejpal had attempted to rape her after the ThinkFest in 2013 in Goa.

Why, Mr Goswami, could the video be doctored, as you would know in your veteran years of journalism?

Perhaps, that is a question that India would want to know about.

Those sitting one the side of saving Mr Tejpal from a "media trial" - Bachi Karkaria, Prahlad Kakkar and Ilmi, all claimed they had seen this CCTV footage, which the public is not allowed to see, and having seen this footage of the victim coming out of an elevator while the alleged rape happened inside it, they now had their doubts about the victim's version of events being entirely accurate.

In fact, Ilmi even revealed that before watching this footage she also had jumped the gun on Mr Tejpal, whose case under the charge of rape is still in trial so he is not necessarily guilty.

Alas, we can't have the footage so we can either take their word for it or the police's, which did file a 2,846-page charge-sheet against Tejpal. The best we were told on Arnab's show from the defence's perspective was that the victim's demeanour in the video didn't betray a tragedy such as rape.

That tempts one to think what kind of demeanour best depicts a rape, but perhaps that is a road no one should have gone down. Nevertheless, after having cast their doubts about the victim's perspective, they went on to "debate"about how a "media trial" cast undue doubt about Mr Tejpal's perspective of things ahead of his trial and letting the courts pass judgment.

Well, isn't that just hypocritical, and that's exactly what Arnab was saying, making it a one-in-a-million personal landmark for me in finding Arnab and I on the same side in one of his "debates"!

At one point in the episode Arnab asked Karkaria what message it would send to brave women like the victim - who take the bold step to report their cases in a country where less than one per cent of rapes are reported - for a known outspoken and eloquent stalwart of their cause to come out expressing her doubts about a victim by citing evidence she got from the alleged perpetrator.

In this comment Arnab betrayed a sensitivity for nuance that, frankly, I had not expected from his show. Perhaps he could have shown this sensitivity in some of his more "nationalistic" episodes from the JNU fiasco.

Perhaps, he too is not exempt from his allegations of blatant hypocrisy he was levelling on Karkaria, Ilmi and company.

For the most part the defence was shoddy. At no point did anyone attempt to explain the apology letters Tejpal had written to the victim, telling her, amongst lyrical apologies, that if regret could turn back time, the force of his would turn it back to a time where the incident hadn't happened.

Instead, they went with the footage they had seen, which apparently miraculously changes everything including Tejpal's own perspective.

However, as hypocritical as their apparent agenda seemed, the issue the defence lobby put forth was true in its own right! Media trials are a menace - Arnab's show is a leading example of it.

Even in this very episode where Arnab and I were on the same side I could not help notice when the anchor opened a "debate" by letting Prahlad Kakkar go first because he was on the "wrong" side.

Well, okay then, this debate isn't rigged at all!

Also true is the "mob-justice" power of media trials that both parties accused each other of in the episode, alleging that the "public opinion" was being shaped in a biased way by each side for their respective personal interests.

Prahlad Kakkar countered this allegations when levelled by Abha Singh (lawyer and social activist) by saying the country or the judges were not foolish enough to be influenced in their judgment by what they or their friends write in the defence of Mr Tejpal if it were not correct?

That is hardly a counter in a country that has hanged a person - Afzal Guru - to quell the "collective conscience" of a nation.

Clearly, the game of hypocrisy has ample players on both sides. Meanwhile the facts regarding rape in India remain this:

1. More than 90 per cent of incidents of rape go unreported in India by almost all estimates.

3. In Delhi - India's rape-capital capital - a rape accused has 83 per cent chances of acquittal.

With the precedent of such shameful statistics, Arnab is right when he says the hypocrisy of elites about the rapes in Lutyen's Delhi and the rapes in Haryana's khap panchayats will not go unnoticed.

I hope Arnab's own hypocrisy shall not go unnoticed as well, neither the menace of pre-motivated media campaigns that all parties - even Arnab - now acknowledge, exists.

#Crime Against Women, #Tehelka, #Arnab Goswami, #Tarun Tejpal
The views and opinions expressed in this article are those of the authors and do not necessarily reflect the official policy or position of DailyO.in or the India Today Group. The writers are solely responsible for any claims arising out of the contents of this article.