PM’s gift to the youth of J&K: Abrogation of Article 370 has opened up possibilities of increase in employment and economic growth

That Article 370 was discriminatory has been discussed and debated at length. But its mere revocation has opened up new possibilities for the youth of Kashmir.

While one of the senior-most leaders of the Congress, professing to represent the Kashmiris, observed that they could be bought easily, in his address to the nation, Prime Minister Narendra Modi offered an elevating, liberating, empowering and a partnership-driven vision for Jammu & Kashmir and Ladakh. When told that National Security Advisor Ajit Doval was in Kashmir, directly engaging with ordinary people on the ground, reassuring them about their future and the immense possibilities that it now offered, Congress leader and Leader of Opposition in the Rajya Sabha, Ghulam Nabi Azad, retorted that the people could be purchased.

He thus spited his own people, cast aspersion on them and displayed extreme insensitivity towards their aspirations. Azad comes across as increasingly disconnected with the aspirations of his own people and has lost the capacity to empathise with them. His own party leaders, however, have started coming out in support of the move to abrogate Article 370 and to reorganise the state. A typical foot-in-the-mouth moment: By alleging that people of Kashmir ‘can be purchased’, Ghulam Nabi Azad is insulting his own people. (Photo: India Today)

They realise that this will pave the way towards real prosperity and open up opportunities for the people of the area. We must also realise that a number of parties in Parliament have clearly supported the move because they are convinced that it will stub out terrorism and usher in a wholly new phase of development.

These parties and their leaders have read the mood of the nation; have realised the sense of the people of J&K and Ladakh in support of this decision. Both PM Modi and Home Minister Amit Shah have clearly spelt out the development dimension of the move. The act of abrogating Article 370 is a democratic, legitimate, Parliament-debated, ratified exercise with the ultimate aim of ending an era of deprivation for the people of the region.

The only ones who have been negatively impacted are terrorists and separatists — both proxies of Pakistan, and their sympathisers in politics and the academia. It is these sympathisers who speak of the human rights of terrorists, but have never spoken of the neglect that people of J&K and Ladakh have faced over the decades because of this discriminatory and divisive Article of the Constitution. Ironically, many of those who have earned a fortune by soliciting foreign funds and support in the name of ending ‘manual scavenging’ in India, are now crying hoarse against removal of Article 370. 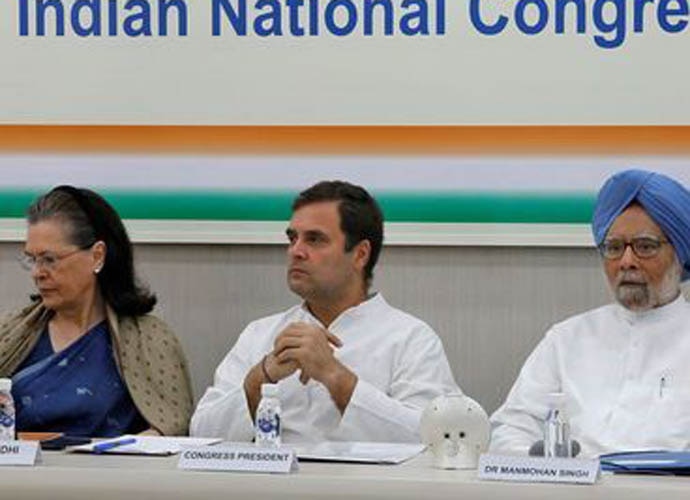 Cracks are apparent: While some people in the Congress supported Article 370, some peddled Pakistan’s narrative — others indulged in fear-mongering. (Photo: Reuters)

In fact, this could actually end the inhuman practice in the region. The Article 370 debate has exposed the Congress. It has revealed the fissures within and the confusion that plagues it. The party has become a motley collection of factions, with some siding with separatists, some indulge in fear-mongering, some are composing statements that aid Pakistan’s subversive narrative and others are trying to hesitatingly take a stand for India.

Interestingly, all the three leaders who were ill-treated by Congress dynasts or their advisors — Sardar Vallabhbhai Patel, Dr BR Ambedkar and Dr Syama Prasad Mookerjee — were advocates of abrogating Article 370, since they realised that it would only serve to divide and discriminate. Dr Mookerjee had to die in pursuance of that demand. But Azad and Congress are passé; PM Modi’s vision is the future for the people of Jammu & Kashmir and Ladakh, especially the youth, to whom he has appealed to come forward and join the march of progress, stability and possibilities. Good riddance: Revocation of Article 370 will usher in economic growth in Kashmir and open up new employment opportunities for the youth. (Photo: India Today)

Until now, no leader has ever given such a comprehensive, elevating and concrete development vision for the region. There is no triumphalism in PM Modi’s vision. In fact, it is the triumph of a new narrative, of PM Modi’s will to empower the marginalised and to ensure that the fruits of development reach all sections equally. PM Modi’s determination with respect to J&K and Ladakh is rooted in his philosophy of governance, ‘Sabka Saath, Sabka Vikas, Sabka Vishvas’ and ‘Jan Bhagidari’.

He wants these two guiding dictums to be the foundations of a ‘Naya J&K and Ladakh’. He spoke of strengthening grassroots democracy, which is now striking stronger roots in the region; of ensuring actual implementation of schemes on the ground; of utilising the strength and resources of the region to empower the people of the area. An undiluted focus on policies will improve the ease of living and inaugurate a new era of development with the entire country rallying behind the people of J&K and Ladakh to make it a truly collective endeavour.

PM Modi knows he has the support of those who matter — that is, the people of India.

#Article 370 revoked, #Amit shah article 370, #Jammu and kashmir latest news, #Article 370
The views and opinions expressed in this article are those of the authors and do not necessarily reflect the official policy or position of DailyO.in or the India Today Group. The writers are solely responsible for any claims arising out of the contents of this article.