Mehbooba Mufti continues to take on the BJP-led regime on Article 370 even when the other co-signatories of the Gupkar Declaration have fallen silent.

At the time of Omar Abdullah’s release from Hari Nivas sub-jail, a friend of mine who works with the Jammu and Kashmir government texted me: “Tiger is back... Issko bohat kuch bolna hai. (He has a lot to say.)” He was referring to the bold statement Omar would make on the abrogation of Article 370. I took it seriously, knowing my friend and his roots in National Conference.

But even after a month, when no such statement/tweet came from the tech-savvy grandson of Sher-e-Kashmir, I texted my friend asking, “Where is the tiger?” He replied with an emoji that expressed 'Sorry'.

The continued silence of the otherwise firebrand orators — Omar and his father Farooq Abdullah — for reasons better known to them, has left the incarcerated president of Peoples Democratic Party (PDP) and the last Chief Minister of the erstwhile state of Jammu and Kashmir — Mehbooba Mufti — alone on the turf against the right-wing BJP-led government over the abrogation of Article 370. Article 370 gave special status to Jammu and Kashmir in the Indian Union before it was removed by the Narendra Modi-led government, who divided the state into two union territories — Jammu and Kashmir, and Ladakh.

Article 370 was revoked with meticulous planning — courtesy Home Minister Amit Shah’s great arithmetic. Before the Bill to abrogate Article 370 was tabled in the Parliament on the morning of August 5, 2019, Kashmir woke up to a stringent curfew in place and complete communication blackout. And its leaders, including former Chief Ministers Mehbooba Mufti, Omar Abdullah and Farooq Abdullah, packed in different jails and sub-jails in an overnight operation.

Over 10 months have passed since the abrogation. Most of the top leaders are out now, except Mehbooba Mufti and Shah Faesal of Jammu and Kashmir People’s Movement. Both the leaders continue to remain detained under the Public Safety Act. Mehbooba was recently shifted to her Gupkar Residence in Srinagar, which has been converted into a sub-jail.

The other mainstream political leaders, including the two former Chief Ministers Farooq Abdullah and Omar Abdullah, secured their release in March this year, much before the tulips blossomed in the Tulip Garden some few kilometres from their posh Gupkar residence.

After their release, the father-son duo has taken everyone by surprise over their continued silence on the abrogation of Article 370. They are the only political leaders I have seen in the 30 years of my life, who are shying away from talking about politics. They continue their graveyard silence over the removal of Article 370 — which otherwise remained the core agenda/slogan of their political party, National Conference, over the decades in or out of power.

What was more surprising was when Omar Abdullah, in a tweet, gave a complete miss to the phrase — Article 370 — and demanded the restoration of statehood and conducting polls. Omar’s tweet was a reaction to the government of India’s new domicile laws for Jammu and Kashmir in April.

It’s high time the people of J&K get to decide the laws that will govern them rather than being subjected to the whims & fancies of the centre where orders are issued in the morning & changes to the same order issued in the evening.Restore statehood, conduct elections. #Democracy https://t.co/SiDRLcmRiG

Like the Abdullahs, many other political leaders have chosen silence.

“What should I say when people like Omar and Farooq Abdullah don’t have the courage to speak? Who am I?” a former minister told me on condition of anonymity.

It is said that most of the leaders were supposed to sign a bond with the government to secure their release. The bond forbids them to speak about the events that took place on August 5 last year, referring to abrogation of Article 370. According to the bond, the signatories declared that they will not make any comments or issue statements or make public speeches related to the event.

However, amid all this political din and pin-drop silence in a place like Kashmir, where otherwise the political drums always remain abuzz with the political slogans of autonomy, self-rule, achievable nation and what not, Mehbooba Mufti seems the only mainstream Kashmiri leader who is vocal. Her vocalism seems to have cost her a prolonged detention. With literally no communication tools available, Mehbooba Mufti authorised her daughter Iltija Mufti to operate her Twitter handle. It won’t be wrong to call Iltija the spokesperson of the jailed Mehbooba Mufti. Iltija kept her mother’s Twitter handle buzzing to keep people and the party well-informed about Mehbooba’s stand on Kashmir’s new political map that was redrawn on August 5, 2019. 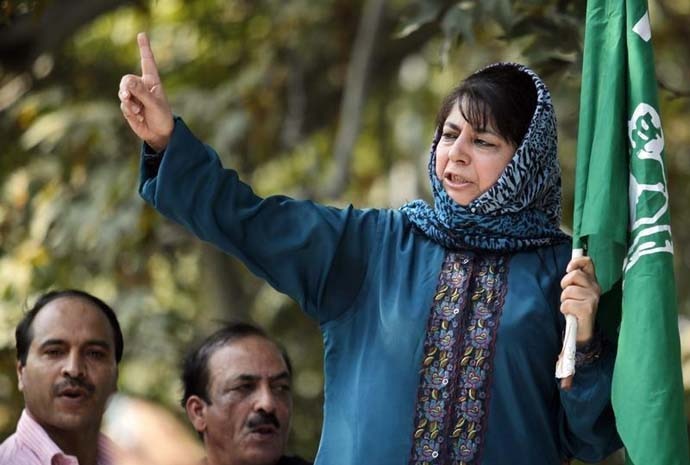 Mehbooba Mufti seems to be the only mainstream Kashmiri leader who is vocal. (File photo: Reuters)

The tweets tell us that Mehbooba Mufti has neither bowed nor moved an inch from her political stand on Article 370. She continues to take on the BJP-led regime even when other co-signatories of the Gupkar Declaration have fallen silent. The only other political leader who takes on the present regime over the abrogation of Article 370 is Muzzafar Shah of the lesser-known Awami National Conference.

Gupkar Declaration was signed on the evening of August 4, 2019, where all regional political parties including the Congress, assembled at Gupkar Road and endorsed a declaration to jointly fight any attempts to abrogate the special status of Jammu and Kashmir. It was unanimously resolved that all the parties would be united in their resolve to protect and defend identity, autonomy and the special status of Jammu and Kashmir against all attacks and onslaughts whatsoever. That modification, abrogation of Articles 35A and 370, unconstitutional delimitation or trifurcation of the state would be an “aggression against the people of Jammu, Kashmir and Ladakh.”

The latest tweet on Mehbooba Mufti’s handle on May 5 read: “Stifling voices of reason has become the norm for the current dispensation esp post illegal scrapping of Article 370. Therefore, the extension of my mother’s detention doesn’t surprise me. Wishful thinking to assume that by smothering any debate on Article 370, the issue will vanish.”

Stifling voices of reason has become the norm for the current dispensation esp post illegal scrapping of Article 370. Therefore, extension of my mother’s detention doesn’t surprise me. Wishful thinking to assume that by smothering any debate on Article 370, the issue will vanish

Before this, on April 28, Mufti retweeted the tweet of her party J&K PDP that said: “...we are proud that our party president has been staunchly vocal in her stand against abrogation of Article 370, even after being cast with PSA since August 5 and even in the times of a global pandemic!”

Another tweet said that when restrictions are finally lifted on Mehbooba Mufti, she will approach all stakeholders for a joint strategy to move forward.

When restrictions are finally lifted on Ms Mufti, she will approach all stakeholders for a joint strategy to move forward. She will also speak to the press about her views on what transpired post 5th August.

Only time will tell what unfolds later. But as they say, ‘silence is acceptance’. It is a sad reality here, as both the former Chief Ministers have left the last serving Chief Minister of the erstwhile state of Jammu and Kashmir all alone to put up a face of resistance against what happened on August 5.