It took strategy, research and precision timing, but Amit Shah pulled it off, leaving the Omars and Muftis dazed at the skill of a man they don't even consider their social equal.

Only today, with the benefit of hindsight, are we realising the enormous long-term planning that went into the abrogation of Article 370.

To understand how this came about, we need to look back at the break-up of the People's Democratic Party (PDP)and Bharatiya Janata Party (BJP) coalition in June 2018.

Much of this was triggered by a spate of law and order issues — bringing Amit Shah into the picture.

The BJP was never happy with Article 370, with the Sangh Parivar rightly incensed by Syama Prasad Mookerji's custodial murder in Kashmir. The tension started rather mildly over the Kathua rape case. Reportedly, there was some conflict that the Central Bureau of Investigation (CBI) should’ve been handed the investigation as opposed to the local police over complaints that the accused were being framed.

The BJP-PDP, which had already been at opposite ends of the spectrum, had never really gotten along, but the government's decision to forgive first-time stone pelters and provide them with jobs really sounded the death knell of the relationship. Much of this had to do with hard facts — 83% of terrorists in Kashmir have been stone pelters, and logically, giving jobs to stone pelters as opposed to law-abiding citizens simply incentivises people to pelt stones. The Jammu & Kashmir National Conference (NC) was not an option because, going by conversations with BJP insiders, Omar Abdullah "had drunk too much of his own liberal Kool-Aid" and wasn’t willing to adopt a pragmatic approach.

That experience only solidified Amit Shah's decision to do away with Article 370.

But how he decided to go about it was sheer genius — placing chess pieces one by one for the final assault.

This is where Dalit rights and the rights of lower caste Hindus were used as a Trojan horse. Ostensibly, it was the denial of rights to these marginalised sections that made the BJP raise the Article 35A issue. This was directly related to 35A, as state governments revoked the residency rights of the Valmik community — manual scavengers — if they chose social mobility through a different career. This was brilliant for several reasons. It meant that no national or regional party could oppose it for fear of alienating the SC/ST vote. But equally, it gave a huge push to the dilution of Article 35A. Additionally, there was the question of women's rights, given the BJP's championing of the Triple Talaq Bill, which would not apply to Kashmir and women's inheritance which had become the norm in the rest of India.

All this led to the two main parties — the PDP and NC — boycotting local body elections.

While we now know, with the benefit of hindsight, that this was a carefully laid trap by Amit Shah, at that time, the PDP and NC thought it was a masterstroke, gaining back the soft separatist vote.

It basically produced a whole new set of hyperlocal leaders, not tied to the two old corrupt parties — new leaders whom the BJP could work with directly.

This would serve to cut off the NC and PDP's sources of funding, which was anyway based on patronage. 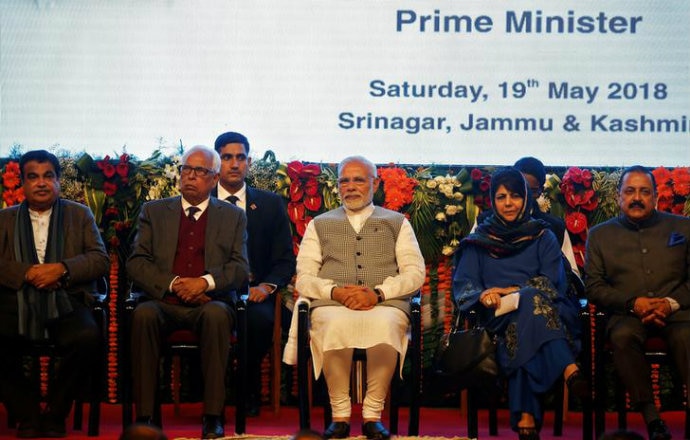 The ground set, in February 2019, the BJP moved the Jammu and Kashmir Reservation Bill, requiring Kashmir to provide 10% reservation for marginalised communities. The bill, obviously passed the Lok Sabha with ease, but again, it had a Trojan horse. This was the provision that the Governor could act as the local Assembly if the state did not have a functioning Assembly. In effect, the Lok Sabha had legislatively validated Mohd. Maqbool Damnoo vs State Of Jammu And Kashmir (1972) and overridden SBI vs Santosh Gupta (2015) that had held the opposite position.

From this point on, the BJP could have pushed ahead roughshod, removing Article 370 right then.

But it chose to tell us that this wasn’t about elections, but a deep ideological belief close to its heart. Come May 23, the die was cast, feelers went out, and rumours started floating by the afternoon itself when the scale of the victory had become obvious. The question here is — why should we believe that this was deliberate 4D chess on Amit Shah's part and not a series of accidents? We know this now because the first thing Amit Shah did in 2014 was to requisition British surveys and reports of the region, as he is apocryphally reported to have said, "The British were far more methodical and far less prone to emotion." Many people walking in and out of his office have attested to his having staff photocopy these records — some of which were over a hundred years old. Clearly, this was a man who knew what he was looking for.

Second, you cant have a deliberate string of episodes — pulling the rug from under the PDP, flaunting Article 35A, using SC/ST emancipation, etc., without a deliberate plan, given that this was far too systemic an exercise.

What happened in Parliament today was not some badly thought-out electoral promise but the culmination of a 4D chess game that Amit Shah had conceived of in 2014, while his opponents were playing Tic-Tac-Toe and were busy posturing. In the end, it turned out game, set and match Amit Shah, with the Muftis and Omars none the wiser as to how a man they don’t consider their social or intellectual equal ran rings around them.

Also read: Why Kashmiris want Article 370: Kashmir had a different identity, even its own flag. Now, we have nothing left