The Pathos of Pakistan: With Article 370 gone, Pakistan loses its 'jugular vein' and its face

Pakistan is cornered after India revoked Article 370. But it is still a time of great caution for India. We must watch the neighbour's moves, his begging bowl in one hand, dagger in the other.

Barely a fortnight after Imran Khan returned from his visit to the US — “triumphant” after President Trump offered to mediate the Kashmir issue — the Indian government announced the revocation of Articles 370 and 35A, leaving Imran and the Pakistani Army in impotent rage.

Pakistan lost what it used to call its “jugular vein”.

In what could be seen as a diplomatic snub, when Imran Khan reached the Dulles airport, reportedly there was no high-ranking US administration official to welcome him.

On the contrary, Pakistani Army chief General Bajwa, who accompanied Prime Minister Imran Khan, was the one who did the actual talking in the US. The General was presented a guard of honour with a 21-gun salute as he arrived at the Pentagon — and was received by Chairman Joint Chief of Staff General Joseph F Dunford. He had independent meetings with President Trump and the US Secretary of State, Mike Pompeo.

The Americans — and the rest of the world — know where the true power lies in Pakistan, and they made no bones about it this time.

However, despite all this, the Pentagon approved only USD 125 million worth of technical and logistics support for Pakistani F-16 fighter jets. This will essentially be used to pay salaries to 60 US contractors to monitor the use of the fighter jets in Pakistan.

With the revocation of Article 370, Imran Khan and the Pakistani Army must be seen doing something to display their anger against India. Even if they cannot actually do something, they should at least be seen pretending to do something. If not, there will be trouble back home from the political opposition, jihadis — and the Army itself.

All these are desperate moves by a country that has lost its face. To that extent, India should be indulgent and let them rant.

Pakistan has been threatening to go to the United Nations Security Council, the International Court of Justice and has approached the Organisation of the Islamic Conference (OIC). So far, the reactions of the international community have ranged from being lukewarm to outright aloof. If Pakistan challenges India’s move in the international arena, it will be seen as a country clutching a begging bowl in one hand — and a dagger in the other.

Imran Khan can try and impose economic sanctions and threaten to “starve” India, asking the government to roll back the revocation. If he does that, it will be a relief for India, for we will not need to bother with the magnanimity and diplomatic niceties we have displayed thus far towards the hostile neighbour by not taking counteraction to their misdemeanours. The niceties and the magnanimity have always been misinterpreted by Pakistan. The visit that crashed: Imran Khan's "triumphant" visit to the US came to naught when Article 370 was revoked. (Photo: Reuters)

Pakistan can and will knock furiously at various doors in the international community — it will also retaliate by letting loose its psychological warfare (PSYWAR) unit, try to create unrest in Kashmir and probably shut down the Kartapur Corridor even before it is formally opened. As it is, the future of the Samjhauta Express stands bleak and as a misnomer in the present state of relations.

Of course, Pakistan can also always unleash the 30,000 to 40,000 militants in that country “who have been trained and fought in some part of Afghanistan or Kashmir”, as was admitted by Prime Minister Imran Khan during his US visit. Reportedly, the delegation that accompanied Khan agreed to take action against militants. The words cannot be hollow as the action (or the lack of it) can be easily verified by American or British intelligence.

So, Imran Khan now has a choice — either he defies the US and UK and lets the militants run loose. Or, he can defy the Pakistani Army and order a shutdown of all terror camps.

With the FATF to discuss Pakistan’s future as a responsible state in the next few months, does the country even have the option of unleashing the militants?

Not unless it has a death wish.

To keep jihadi tempers in check, the country might accord a high profile to Hafiz Saeed and Maulana Masood Azhar once again. Unlikely that there would be anything more than that.

The Pakistan Army is not likely to engage India in a conventional war since it has too much at stake in the present status quo. Besides, a war between nuclear-armed states is internationally unacceptable. The Line of Control (LoC) now has a different connotation than it did in 1999.

The UN has issued its usual inconsequential anodyne statement, and the US has said India’s actions are its internal matter.

China is the only major country that has come out with a statement on Ladakh — while urging peaceful negotiations.

So far, India has not issued any statement on how the Uighurs are being treated in China or what has been happening in Hong Kong for weeks. Maybe it is time that we consider replying to the Chinese the same way — sharp and forceful.

What Pakistan, and many in India, failed to realise is Narendra Modi’s ability to surprise. He surprised everyone by inviting SAARC leaders to his swearing-in and Nawaz Sharif had to show up. Modi showed up at Nawaz’s granddaughter’s wedding and Nawaz was pleasantly surprised. On both occasions, the Pakistani Generals were unhappy and launched a few terror attacks. Modi also surprised Indians with the contents of his speech on August 15.

Similarly, reactions to the Uri and Pulwama terror strikes were a clear indication that India had changed. The message was clear — India was not afraid of war but will not start a war.

And now, Article 370 and 35A are no longer on the statute books. This is a perfectly legitimate exercise because it was inserted by India in 1954, and has now been withdrawn. Both actions are unilateral. These were not a part of any UN resolution. Article 35A was surreptitiously introduced. The state of Jammu and Kashmir has taken a different geographic and political shape. The issue cannot be internationalised anymore. It is, quite clearly, an internal matter.

In any case, Pakistan has been tinkering around with parts of Jammu and Kashmir under its illegal occupation. It signed off a part of the territory in Northern Kashmir to China in 1963.

The Lok Sabha had discussed the issue of revocation of the special status of Kashmir even in September 1964. A news report dated September 12, 1964, states that there was a unanimous demand for Kashmir’s full integration with India in the Lok Sabha the previous day. It was Prakash Vir Shastri’s private bill that was being discussed and, as was reported, there was “unexpected support from Congress who together with members of the Opposition, pleaded that the time had come to end the uncertainty about the State’s future. One way was to scrap Article 370.”

That discussion was inconclusive.

It took us 55 years after that to do away with Article 370. The method adopted this time was more realistic, practical — and in national interest.

As Zorawar Daulet Singh, author of the book Power and Diplomacy recently pointed out, the removal of Jammu and Kashmir’s special status ends ambiguity about its status and snatches strategic initiative away from Pakistan and its benefactors who used this issue to berate India. 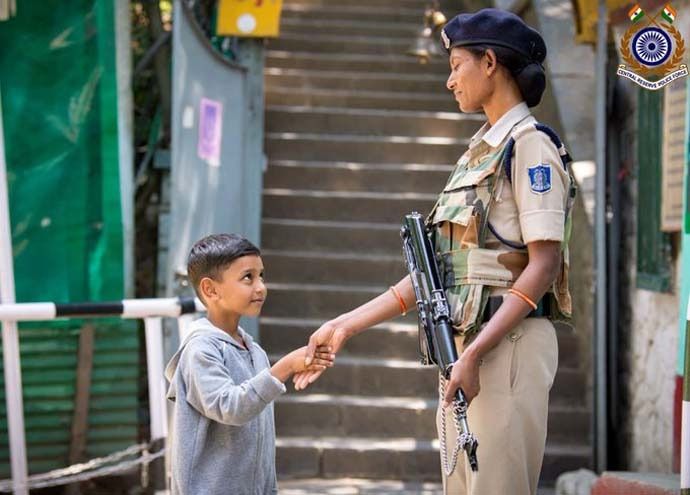 There's time yet: Peace will take longer to establish in Kashmir. But the first step has finally been taken. (Photo: Twitter/Prasar Bharati News Services)

This now opens possibilities for development and dignity for the people of Jammu and Kashmir, who have been cannon fodder in a distorted political economy that has fueled violence.

Kashmiri politicians, and their friends in mainland India, took advantage of Articles 370 and 35A. So did the Pakistani establishment — the Pakistani Army to retain primacy, politicians to campaign during election time, wily businessmen looking for profits, religious fundamentalists to strengthen their hold in Pakistan. Now, those who took advantage of their war cry “Kashmir Banega Pakistan” will have to find other slogans.

A happy congruence of interests on both sides of the LOC.

The next few weeks will need a close watch.

There is normal traffic plying on the streets of Srinagar and prayers have been held in mosques. These are positive signals — but apparent normalcy should not be mistaken for real peace. The usual scaremongers in the media and social media will have to be pre-empted. In this game, he who has the first say has the advantage. Denials or counters do not have the same effect. No relaxation of security measures would be advisable.

The business of sorting out citizenship issues, the return of Kashmiri Pandits and organising elections in Jammu and Kashmir should begin as quickly as possible.

None of this will happen overnight.

But we have waited 70 years.

#Donald trump meeting imran khan, #Imran Khan, #Pakistan, #Article 370 revoked
The views and opinions expressed in this article are those of the authors and do not necessarily reflect the official policy or position of DailyO.in or the India Today Group. The writers are solely responsible for any claims arising out of the contents of this article.