Because this is about you, not us: A Kashmiri Pandit’s open letter to Muslims in the Valley after Article 370 goes

Even as armchair experts try to position the removal of Article 370 to be majorly about Kashmiri Pandits, this one is for you. For Pandits, it may be too little, too late.

You and I — we have suffered at the hands of history.

We both have been victims of politics and prisoners of vested agendas. We have collectively bled at the behest of power-hungry people who put their interests ahead of ours.

You have tided through seventy years of political and economic neglect and indifference — just as we, Kashmiri Pandits, have waited out three decades of forced exile from our homeland.

But in all this, what is most important is that we emerged survivors. The Kashmiri Pandit: Home? Or still far away? (Photo: Reuters)

Yet, today we stand at the cusp of another transition that is not of our making.

We were neither a part of the formalisation and acceptance of Article 370 post-Independence, nor are we a party to its removal. We were always mute spectators, bystanders in decision-making.

Having said that, we cannot afford to use yesterday’s logic in today’s situation. So, we may want to play an active and mindful part this time over.

While many in the circles of armchair experts and journalists may try to position the removal of Article 370 to be majorly about Kashmiri Pandits and their rights, take it from me — this one is for you.

For Pandits, it may be too little, too late.

I spent the whole of August 5 accepting congratulations. Yes, there was a gleam in my eyes but most people misunderstood it. I have defied exile for a good seventeen years by going to Kashmir every other month — even at the peak of militancy. It is home and will remain so. I had never given any state the right to restrict my claim to my homeland. It was a personal choice.

But yes, for many other Kashmiri Pandits, scrapping Article 370 may unfold as an opening to reconnect, especially those who did not go back after the exodus. But understandably, even for them, it won’t be a cakewalk.

To me, reading the scrapping of Article 370 'just' as the return of Kashmiri Pandits to the Valley is belittling it.

Do people even realise that almost three decades have passed since the exodus? Kashmiri Pandits were forced into exile and now, they have jobs outside, their kids are studying or settled elsewhere. Most have sold their properties. Even the next generation on both sides has no exposure to the culture in the Valley where religions and beliefs co-existed for hundreds of years. They have no emotional connect.

Why will they uproot once again to reverse-migrate now?

So, yes, it is a feel-good factor for Kashmiri Pandits — but for the time being, that is all it will be.

As for me, I love Kashmir too much to belittle the issue to the level of my own rights as a Kashmiri Pandit woman. The removal of Article 370 must mean much more than that to the people in Kashmir. The tides of good fortune: These can certainly flow to Kashmir now. (Photo: Reuters)

The larger impact must be seen through the prism of what the Special Status has given to people (or must I say, has ripped them off) — the majority of them being Muslims, living in the Valley for seven decades of neglect. The Special Status was more like a badge of honour being worn over a tattered shirt with broken buttons.

But now, revoking Article 370 must mean that a kid in Kashmir gets the same exposure and opportunity as a child in Delhi. It should mean good schools, better hospitals, more universities, jobs galore through big-ticket investments and stability for tourism and service industry to thrive. It must mean India feeling responsible for Kashmir and taking it to a logical conclusion.

I am no economist but commoners like me have their own economic index, much like the McDonald’s index. This past summer was the first one in nearly 17 years of my frequent visits to Kashmir when I witnessed a traffic jam of shikaras near the floating garden of Dal Lake. There was waiting at Nathu’s and the Oyo accommodations dotting the lanes were occupied and taken. The taxi company I always used had a shortage of cabs as most were ferrying tourists up and down the mountain resorts. The Boulevard was being tiled and decorated and laser fountains were being installed.

Incidentally, all this was happening under the Governor's rule. Think about it.

So, here is my earnest request to those in Kashmir today.

It is time to step back and pause. Why do you think the Muftis and Abdullahs of the world are having a problem with the new dispensation? Do you not see the shutters dropping on their big resource-guzzling shops and establishments? For once, run your eyes through the terror money and undisclosed assets of your local leading lights (being exposed as you read). Please notice how the Geelanis of the world have been feasting on your misery for decades, accepting gratification from enemy lines. They resent Delhi because Delhi would mean accountability, monitoring and end of their fiefdom. 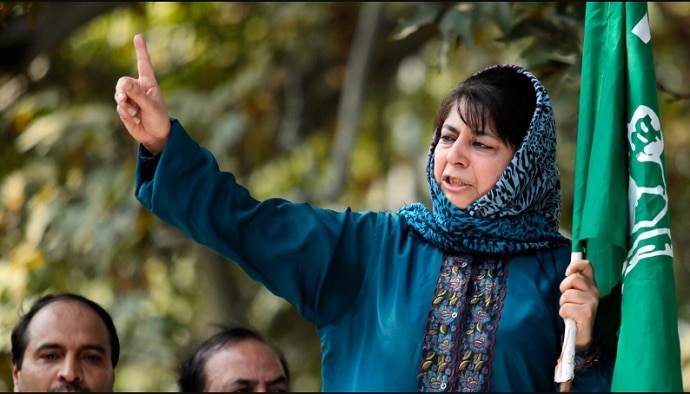 They benefitted. What about you? (Photo: Reuters)

Being a Union Territory would mean Kashmir gets all the benefits that the rest of India gets as government schemes and investments — the benefits that they have kept from you for decades now, all under the garb of Special Status. Do you still want to fall prey to the rhetoric of the same power-hungry political families or do you want to give your future a chance?

When you come out of the present unfortunate restrictions (read, curfew and communications blackout), which are imperative for the safety of your life and property, and when the local leaders come out again, spitting venom to save their backs and assets, please choose wisely.

Rise up to the occasion and demand your rights from people like Narendra Modi and Amit Shah. If they are promising you the moon, it’s time you make them give you one.

Raise your hand now, for history to see you as brave adults, who were not afraid to give the benefit of doubt to a new thought, a new beginning, for the sake of their future generations.

Let there be no need for a young hand to wield a stone to pelt.

Gift them a future to realise.

Also read: With Article 370, I too revoke my hate: For three decades, I suffered as a Kashmiri Pandit woman. That stops today